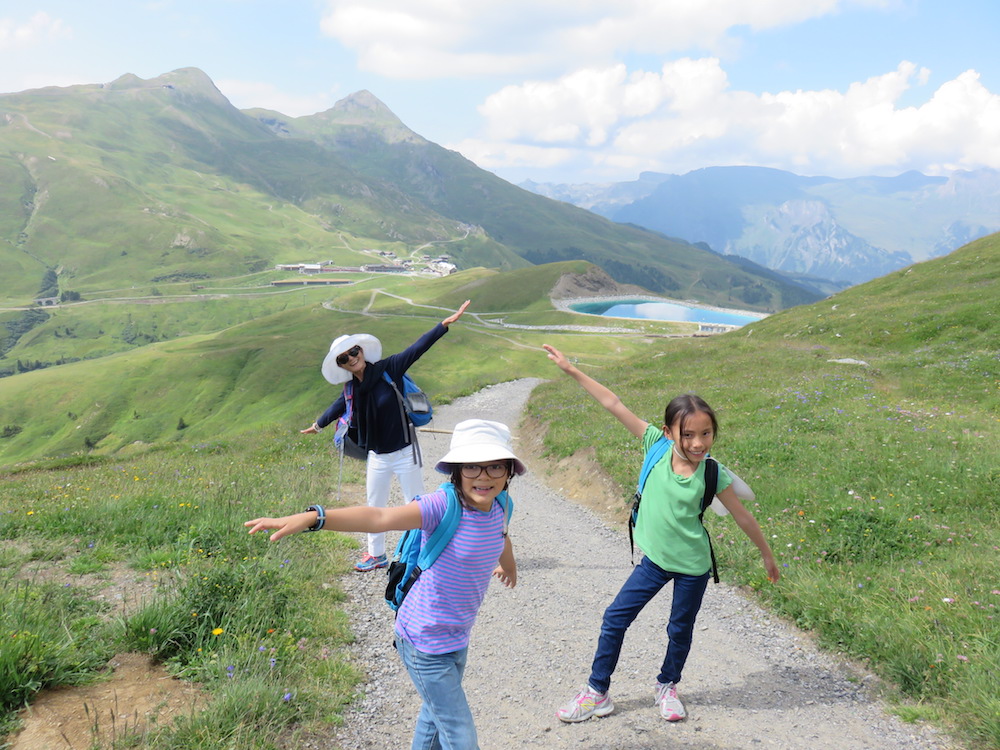 Leslie Santos and her two daughters, Asha and Lilly, spread their wings in 2015 in the Jungfrau region of Switzerland.

How can airlines be carbon neutral and do their part to address climate change?  Please read on to learn about a sea change sweeping the airline industry, and how we all can hop on this trend to reduce our own carbon footprints and transform this industry.

Time Person of the Year Greta Thunberg grabbed attention by taking a sailboat to the United States to avoid air travel, boosting the “flight shaming” movement.  At the forefront of this movement, Sweden saw a 9% drop in flight volume from 2018 to 2019.

Carbon dioxide emissions from air travel make up only 3% of U.S. emissions, so you might wonder why the focus on air travel.  While this share is low, it is a reflection of modest average air travel in the U.S.  But many of us, especially in well-off communities like Piedmont, travel much more than average, which can drive up this percentage with respect to personal emissions.

For example, until a few years ago, Piedmonters Brett Byers and Leslie Santos and their children would take one long flight each year, often to Europe, and a number of shorter airplane trips.  However, the CO2 emissions of one person flying economy class on one jet trip to Europe equals 15% of the annual emissions of an average American 75% of the average worldwide per-person CO2 emissions.

Upon realizing that their CO2 emissions from air travel were so high, Brett and Leslie, having already made their home and cars nearly carbon neutral, reduced their air travel.  But doing so came at a cost of fewer visits to distant friends and family and less exposure for their daughters to other cultures.

Fortunately, in the last few months, a cascade of airlines announced that they are becoming carbon neutral. This means that they will match any emissions they produce by supporting projects that reduce or absorb carbon, such as reforestation.

The incentive to act is particularly substantial for airlines in Europe, which is ground zero for flight shaming. In addition, there is greater momentum for climate action in Europe and fast trains serve as an alternative to flight travel.

EasyJet was the first to announce the move to carbon neutrality in November 2019.  Other airlines followed almost immediately: Air France and Lufthansa for flights within Europe, and British Airways for their flights within the U.K.

Then, in January, the trend landed in the U.S., with JetBlue moving first. In another major milestone, Delta announced an ambitious plan to become the first global airline to go carbon neutral for all flights.  Other airlines may delay joining this industry shift while suffering a slowdown due to the coronavirus, but pressure on them will continue to build.

Your purchasing decisions could push more airlines to act

“We also believe that the public has the power to push the entire airline industry to carbon neutrality within a few years,” he adds.

If just a small share (perhaps 3% to 10%) of flyers take carbon-neutral airlines whenever possible, this could reduce the volumes and revenues of other airlines by several percentage points, Brett explains.  Such a reduction is a very big deal for airlines, which have low net profit margins and high fixed costs.

Another option for travelers: carbon offsets

Many airlines and some online air travel aggregators offer the opportunity to purchase carbon offsets at checkout.  If not, carbon offsets can be bought from third parties such as the nonprofit cooleffect.org.  The current cost per person of offsetting a roundtrip Europe flight is just $40. The cost to society of not doing so is estimated to be at least $240, so the offset is a bargain.

For Brett, Leslie and their daughters, all these relatively recent air travel options mean they’re looking forward being back in the skies again, flying carbon-neutral and nearly guilt-free.

To learn more about how to buy carbon offsets, visit the Piedmont Climate Challenge, a website platform that offers dozens of ways to reduce household greenhouse gas emissions and encourages residents to take specific actions by teaming up in a friendly competition.  Join the Climate Challenge today at www.piedmontclimatechallenge.org.

One thought on “Piedmont Climate Challenge: Why I . . . choose carbon-neutral airlines and buy carbon offsets too”