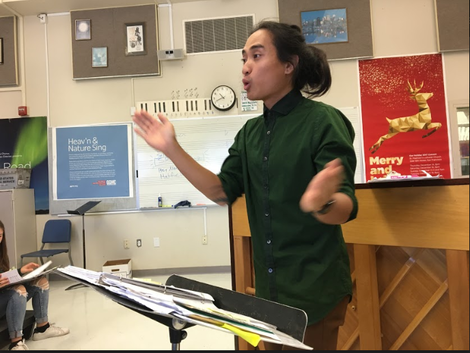 After less than two years as A Capella teacher at Piedmont High School, Sid Quinsaat has resigned the position.

The surprise resignation caps several weeks of uncertainty during which Quinsaat was absent from teaching duties and mostly incommunicado. During those weeks students and administrators were unaware of the teacher’s whereabouts.

According to PHS principal Adam Littlefield, the school had been expecting Quinsaat to return to work after winter break. Quinsaat’s resignation came in a Feb. 24 email to Littlefield, who notified parents the following day. Littlefield declined to discuss the reasons behind the resignation or any other contents of the email. Quinsaat did not respond to messages from the Exedra requesting comment.

The abrupt departure of a teacher in such a key role has thrown the PHS A Capella program into disarray. Quinsaat taught 94 students across four PHS music courses – Chamber Choir, A Cappella Advanced, Freshman A Cappella and AP Music Theory. Quinsaat also taught a course at Millennium High School, and is listed as choir director at St. Ignatius College Prep in San Francisco.

Starting in mid January, when it was believed that Quinsaat was only on a short sick leave, PHS administrators assigned substitute teachers for those classes, said Littlefield. As the days and weeks mounted and Quinsaat had still not returned, the school was not always successful in finding substitutes to keep the classes on track. Since then students and parents have expressed deep frustration at the sudden derailment of this important part of their music education. Said parent Margaret Hiller, whose daughter Megan is enrolled in A Capella; “The A Cappella students have been without a teacher since a few days after winter break ended. The situation is very concerning, with no end in sight.”

The A Cappella groups are a core part of PHS’ music program, and AP Music Theory is offered only once every other year. The choir program has long been known for its stability as well as its excellence. Previous directors, including Alan Harvey and most recently Joe Piazza who retired last spring after 31 years, left big shoes to fill. Both instructors ran the program at a high level and turned PHS into a vocal training center with regional renown. The annual May Revue is a highly-anticipated community showcase.

Quinsaat, whose passion for music and belief in students was always visible, came to Piedmont in 2018 with two years teaching experience and took charge of the Choir program this fall. There were reports of friction between Quinsaat and students, though it is not known if this had any connection to Quinsaat’s decision to step down.

Some students expressed sadness last week as word of Quinsaat’s departure worked its way through the PHS campus. “We were worried and confused,” said one. “I wish we weren’t spending every day wondering if they were ok and if they were coming back or not. It’s hard to understand why they would just leave everything.”

According to Littlefield, PHS is seeking a permanent substitute to finish out the year, and has posted the open position on education websites to be filled next fall. The state of California is currently facing a teacher shortage. Littlefield said there is no chance that Joe Piazza could return to fill in.

The Feb 25 email from Principal Littlefield to PHS parents and students:

I recently received communication from Mx. Quinsaat that they have resigned their teaching positions at Piedmont High School and Millennium High School. PHS will be posting the Acappella and AP Music Theory position through Edjoin, the online portal for hiring educators. Thank you to those of you who have offered suggestions for prospective substitute teachers. Please encourage interested applicants to contact me at alittlefield@piedmont.k12.ca.us  for more information about the position. We will continue to have existing PHS teachers and general substitute teachers serve as substitute teachers during this transition. I will be working with our music teachers in developing lesson plans until a long term substitute teacher is hired. Thank you for your patience, understanding and support.

One thought on “PHS choir/music teacher abruptly steps down”