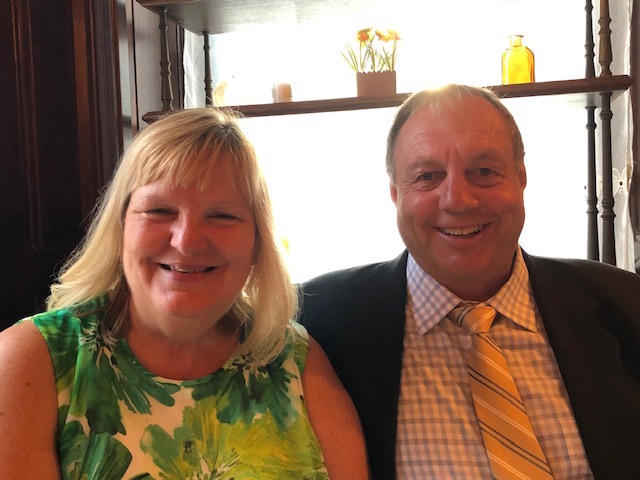 Joe with his wife Carol Sullivan.

Joe was born to William and Helen Sullivan in Ann Arbor, Michigan on August 12, 1956. Joe effortlessly became a lifetime Wolverine fan as his father finished his doctoral degree in pharmacy at the University of Michigan.

Joe’s family relocated to Oakland, CA where he was raised and attended Corpus Christi School. He excelled in sports at Piedmont High School, where he was an athlete on the football and track teams. In addition, he learned to serve his community at a young age and carried his passion for helping others throughout his entire life. As a boy scout, he achieved the Order of the Arrow and he developed his love for the outdoors, especially camping and rafting.

On June 5, 1982, Joe married his high school sweetheart, Carol Lee Robinson, at Corpus Christi Church in Piedmont, CA. Together they built a loving family. In October 1986, Joe and Carol became the proud parents of Ryan Michael Sullivan. Joe and Ryan shared many interests, especially playing football, watching/talking sports, and outdoor activities.  Joe served as a loyal volunteer to Boy Scouts Troop 6 and especially loved to go on all of the camp outs.

Joe owned and operated the Book Tree, a store associated with their family business, Sullivan’s Montclair Pharmacy.  For 50 years the Sullivan’s business was a fixture in Montclair, known for personal service. Joe served his community as the President of the Oakland Montclair Lions Club.

Joe’s loyal commitment to organizations benefiting others made him an outstanding member of many groups. He joined the Grizzly Riders, an association providing student scholarships and financial support at the University of Montana. Joe continued to dedicate his time by becoming a Volunteer Firefighter in Auburn, CA. Joe thrived in this role with his love for BBQ and response to action. He touched countless lives and he will be deeply missed.

Joe will live in our hearts forever and a private burial will take place in Montana in the summer.  Plans for a memorial mass in Piedmont have been postponed to ensure the safety of family members, travelers, and friends due to the threat of the coronavirus.