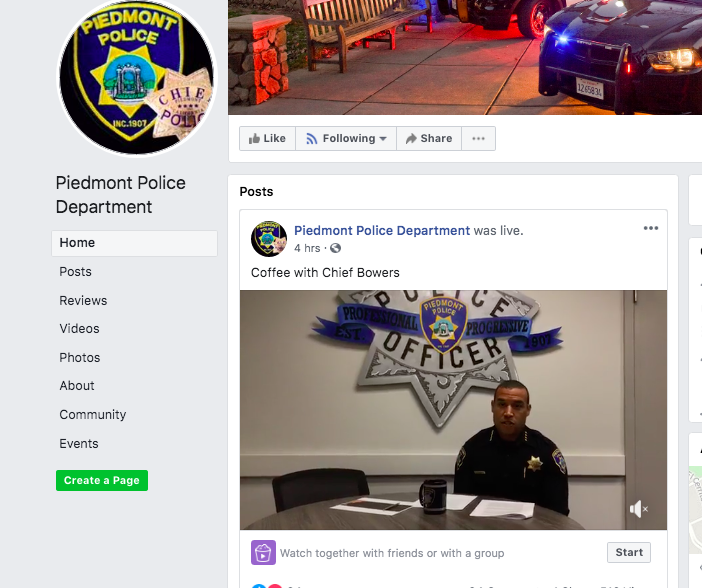 More than 55 people dropped in to the police department’s first virtual “Coffee with a Cop” information session on Friday, Mar. 27. The only topic on anyone’s mind was how the statewide shelter in place order was being implemented in Piedmont.

Starting at 11 a.m. on Facebook Live, Chief Jeremy Bowers reiterated city messages around social distancing and the importance of staying at home.

“This is a marathon, not a sprint,” Bowers said. “We need to understand that the actions that we take are truly going to save lives.”

Highlights from the session:

The City is taking steps to close public spaces due to overuse and lack of social distancing observed around town.

Hampton Field has been closed, including the backboard area where residents have been hitting tennis balls. Bowers said officers will be prepared to start issuing citations for violations of social distancing and shelter in place orders, though the department is currently taking the path of verbal admonishments and warnings. Residents who ignore park closure notices may be cited for trespassing if the problem continues. “We can’t have police officers just posted at parks all day. The city is taking the orders seriously, our non-essential staff are at home. So essential service employees should not be monitoring parks.”

“It is very frustrating that families are allowing groups of kids to hang out. I have had to walk across the park [from the police department] and admonish groups of kids — they are going to congregate,” said Bowers, who noted that he is also a parent, dealing with many of the same challenges related to having kids at home.

Parking restrictions remain in place but are low priority

PPD will review parking enforcement issues on a case-by-case, ongoing basis. If residents have a “fixit” ticket, you can call the nonemergency police number and an officer will meet you outside of the department to sign off on paperwork.

Beware of online scams and solicitations

In response to a question about other specific safety or crime issues residents should be tracking, Bowers noted that because of the shelter-in-place order there has been a decrease in crime-related calls, but that residents need to be vigilant about online scams and phishing attempts. He also advised residents to stick to well-known organizations when making donations and advised against engaging with solicitors.

Although Bowers initially said animal control officers will be patrolling in parks and that notices will be posted in the popular dog-walking areas around town calling for all dogs to be leashed, he agreed to clarify this guidance after several residents noted a disparity between the city’s messaging CDC guidance as it relates to pets (“At this time, there is no evidence that companion animals, including pets, can spread COVID-19 or that they might be a source of infection in the United States”).

PPD later issued the following statement on their Facebook page: “This afternoon we put our Animal Services Officers to work and here is what their research found:The CDC, the American Veterinary Medical Association (AVMA) and the World Organization for Animal Health, all concur that currently there is no clear evidence that dogs (or pets) in general contract or transmit COVID-19. Given that information, we’re not going to further restrict the City’s off-leash standards at this time. Dog owners need to remain mindful of the critical need for social distancing and avoid congregating in any areas with dogs on or off-leash.”

City is keeping seniors up to date via mailers, social media

The Rec Department is playing an instrumental role in reaching out to seniors in the community.

City is unaware of any confirmed Covid-19 cases in town.

The city has no information about any confirmed cases, and, due to privacy issues, it likely won’t have that data unless an affected individual in town chooses to share it. Public health officials won’t advise cities of cases unless there is a significant uptick in exposures that warrant attention.

Piedmont unlikely to have its own testing center

Bowers noted the Hayward has started to conduct drive-through testing and Oakland is in the process of doing so. He said that these efforts are being undertaken outside of public health agencies. Piedmont will likely not be a test site given the need for a sizable physical location for set-up and traffic.

Residents can watch the full session and view questions on the Piedmont Police Department’s Facebook page.

One thought on “In a first, police chief hosts virtual “Coffee with a Cop” information session”