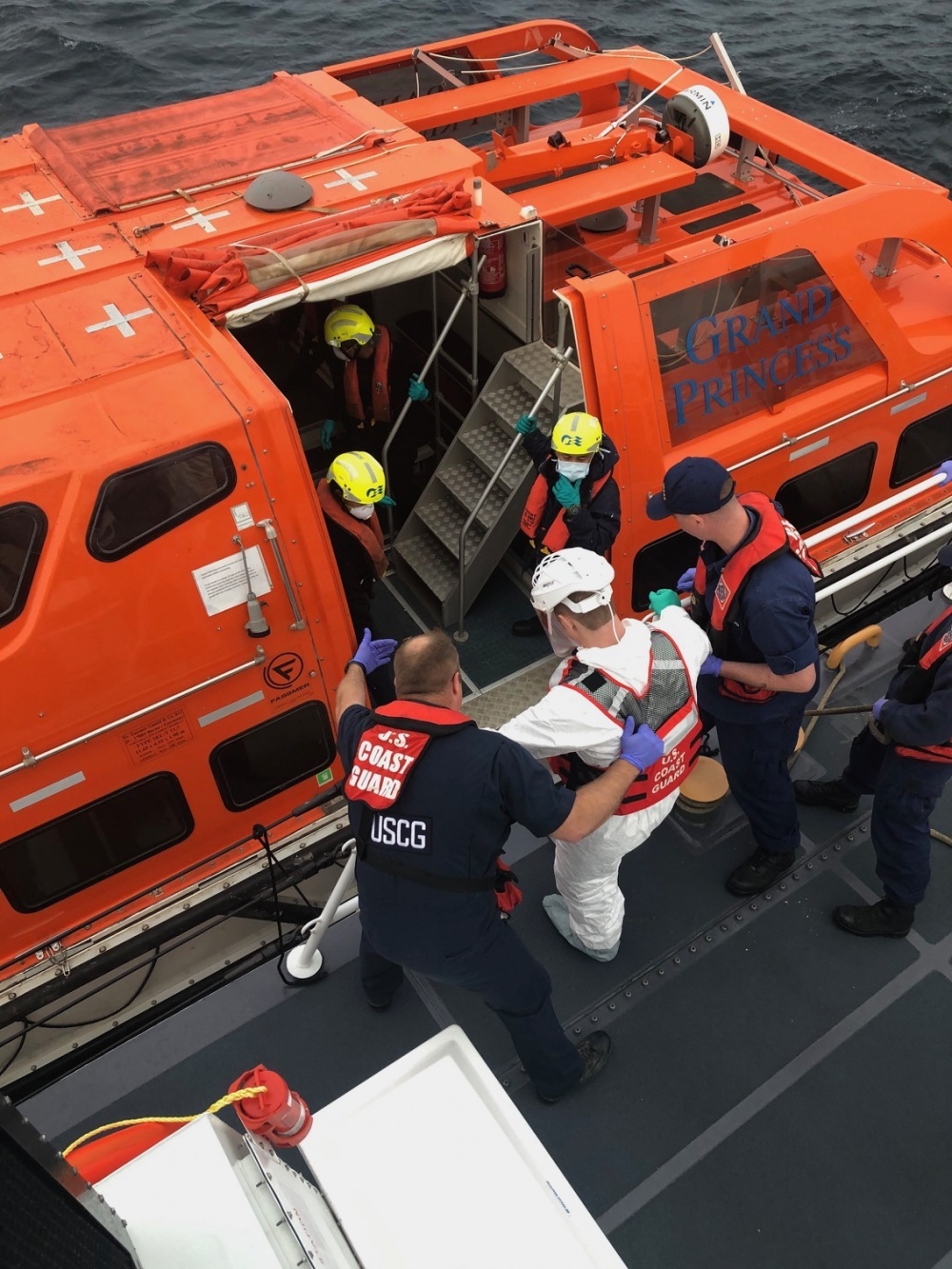 Coast Guard Cutter Pike crew members assist a member with the Department of Health and Human Services on to a small boat from the Grand Princess off the coast of San Francisco, California, March 8, 2020. The Coast Guard transported seven people from HHS in addition to supplies to the Grand Princess and medevacked a second passenger with a medical condition not related to COVID-19 Sunday. (U.S. Coast Guard photo by Lt. j.g. Alexander LaBelle)

The quarantined Grand Princess cruise ship is expected to dock at the Port of Oakland around noon Monday in order to offload passengers and crew members who have tested positive for or may have been exposed to the novel coronavirus.

Passenger evacuations are expected to take two to three days after the ship docks, Gov. Gavin Newsom said Sunday at a news conference with local and state officials. The ship’s docking process at the 10-acre port site involves “enormous complexity,” including optimal timing for tide conditions for accommodating the massive ship.

A 10-acre site at the Port of Oakland is being prepared and secured for the anticipated arrival of the quarantined Grand Princess cruise ship and evacuations of passengers anticipated to start Monday will take two to three days, Gov. Gavin Newsom said at a news conference Sunday with city and state officials.

Health officials have screened at least 46 of the more than 3500 crew and passengers aboard the ship for the virus and 21 have tested positive, 19 of whom are crewmembers.

The ship had been stationed off of the San Francisco coast as federal, state and local health officials sought a solution to evacuate its passengers and take them to local hospitals to be quarantined. Once passengers are removed from the ship, it is expected to leave the Bay Area to continue the crew’s quarantine. Princess Cruises, the owner of the Grand Princess, announced Monday that it would offer full refunds to passengers of the ship, including expenses for air and ground travel, hotel reservations, pre-paid shore activities and gratuities. The company will also offer passengers a credit for the fare on a future cruise.

On Sunday, another passenger was transported by the U.S. Coast Guard from the Grand Princess cruise ship to a hospital on the mainland for treatment of medical condition not related to COVID-19. Coast Guard officials said the ship’s captain notified them of the man – in his early 60s – who needed emergency medical treatment on Saturday night. Watchstanders from the Coast Guard consulted with the duty flight surgeon and Center for Disease Control who recommended the passenger’s removal from the ship. The man and his wife were transported via the Coast Guard cutter Tern to Coast Guard Sector San Francisco on Yerba Buena Island, where emergency crews and CDC officials were waiting Sunday morning.

On Sunday evening, the Coast Guard transported seven California Department Health and Human Services personnel on the cutter Pike to the Grand Princess to assess passenger and crew prior to the ship’s arrival in the Bay Area.

SF confirms 5 new cases of coronavirus, bringing total to 13. The five patients are currently in home quarantine and are in good condition, according to the department. All five are known to have come into contact with another person who is confirmed to have the virus. Further information about the patients is being kept confidential to protect their anonymity.

Over the weekend, the city issued orders barring large and non-essential gatherings at city-owned properties and visitors at Laguna Honda Hospital. The city’s social distancing recommendations also remain in place.

Most public schools in the city have remained open and have not reported any potential exposure to the virus. However, the San Francisco Unified School District closed Lowell High School on Thursday after officials learned a student’s relative was being treated for the virus. The school remained closed Monday. The Immaculate Conception Academy Cristo Rey and Archbishop Riordan High School also announced closures after people related to each school tested positive for the virus. ICA Cristo Rey announced that it will be closed until March 20 after a staff member tested positive for coronavirus, while Archbishop Riordan said it will close Monday because a parent of a student tested positive for the virus. The Riordan campus will receive a deep cleaning during the closure.

Local health officials and the Centers for Disease Control and Prevention reminded residents to take precautions against contracting coronavirus, including washing hands with soap for at least 20 seconds, staying home if sick, covering coughs and sneezes, and avoiding contact with other peoples’ hands.

SF Residents can receive health and safety updates about coronavirus by visiting sfdph.org or by texting “COVID19SF” to 888-777.

NASA’s Ames Research Center in Mountain View has been closed and employees ordered on telework status after an employee tested positive for the virus, NASA officials said late Sunday. “We believe the exposure at the center has been limited, but – out of an abundance of caution, and in consultation with NASA Headquarters and the NASA Chief Heath and Medical Officer in accordance to agency response plans – Ames Research Center will temporarily go to a mandatory telework status until further notice,” officials said in a statement.

Marin County Public Health officials have announced the creation of a hotline for residents to call with coronavirus questions or concerns. It is scheduled to open Monday at (415) 473-7191 and will operate from 9:30 a.m. to 5 p.m., closed 12 p.m. to 1 p.m. Recorded information will be available on the line at all other times.

The Wells Fargo Foundation announced a donation of up to $6.25 million in donations to support domestic and global response to the infection on Sunday. The San Francisco-based bank said up to $5 million will be donated at the local level in the coming months.