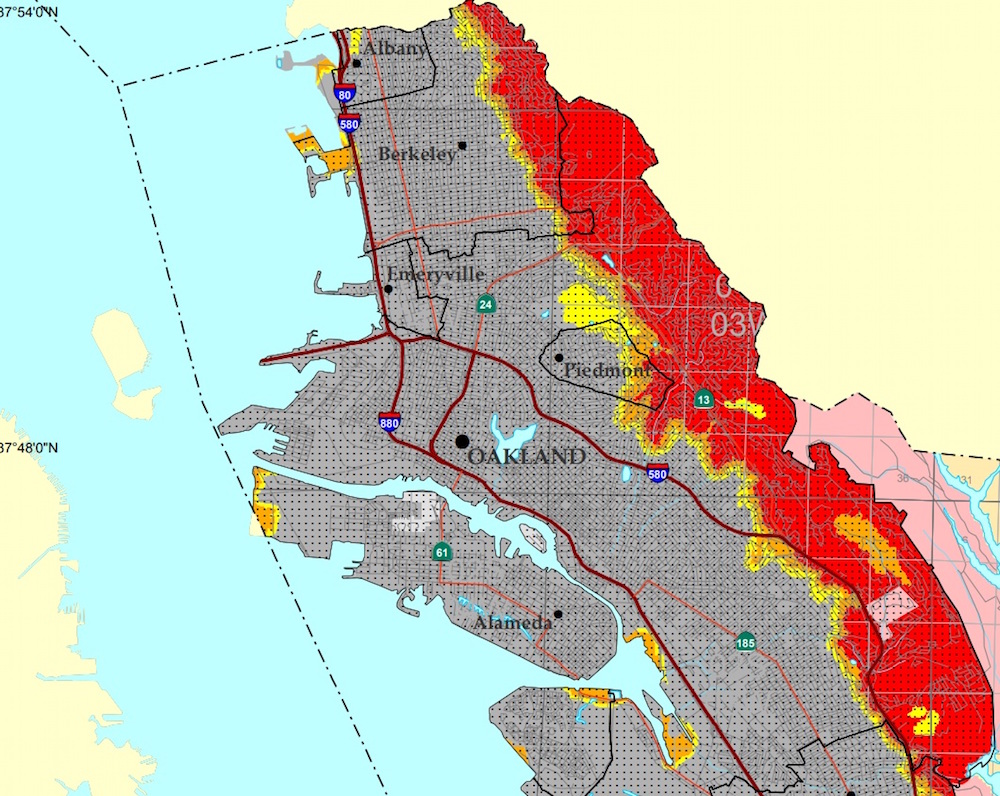 The City Council voted Monday to strengthen various local building, fire, and other codes, including some that will require extra fire prevention measures in a climate-change era when wildfires are a greater hazard than ever.

Likely the most significant change will be the new definitions of “vegetation management compliance” and “wildland-urban interface fire area” in the California Building Standards Code. The codes are amended so that every part of the city will fall within a wildland-urban interface zone. That designation, the city says, means new “fire hardening” construction standards within Piedmont.

Such codes are updated every three years. Cities, towns, and counties are required to adopt state building standards as a minimum, and can also adopt more restrictive codes as they see fit. While most of the codes will remain largely the same, several notable revisions were approved Monday night.

It was the designation of all of Piedmont as a “wildland-urban interface fire area” that drove most of Monday’s discussion. Councilwoman Betsy Smegal Andersen had concerns about what the costs of this fire designation would be to city residents, particularly related to insurance premiums.

“I think we’re all tuned in to the fact we live in an area susceptible to wildfires,” she said. “But what comes along with that designation?”

Fire Chief Bret Black and City Attorney Sergio Rudin said that designation likely will affect homeowners’ insurance premiums, but that it is only one of many factors by which insurance companies set rates.

According to United Policyholders,  a nonprofit insurance policyholder advocacy group, insurance companies typically look at compiled trends over time before changing rates. They also look at specifics — including how well a home is fortified against fire, how well “defensible space” is created around a house or other building — before setting individual policy premiums.

Rudin told the City Council that the insurance market is a key factor in what premiums tend to be. Black said that, in addition to the general risks of living near a state-designated “very high fire severity zone,” that individuals’ own actions to make their properties safer also affect premiums, for the better.

Council members said they realize designating the entire city a “wildland-urban interface fire area” could cause some alarm, and that city officials will have to begin an education effort as to the benefits of making such a designation. That effort, Mayor Robert McBain said, will start before the second reading of these new ordinance, planned for the council’s Feb. 16 meeting.

Councilwoman Jen Cavanaugh said that getting in front of this situation is a good thing. Knowing the city did all it could do to protect itself from a potential devastating wildfire is worth it, she said.

“This stuff terrifies me, and we don’t have that many tools to get out from under climate change,” she said.

Other more conventional code changes were included in Monday’s updates, including:

*** Designating the city’s Planning Commission as the board of appeals;

*** Prohibiting wood shake or shingle roofs except if necessary for repair or replacement of existing wood shingles on existing dwellings and accessory structures;

***  Electric vehicle charger infrastructure will be required for existing dwellings with private garages for which a building permit application with a project value of $50,000 or greater and that includes an electric service panel upgrade;

*** Updating the city code’s deck fire protection requirements to conform to the exterior wildfire exposure provisions of the 2019 California Codes.