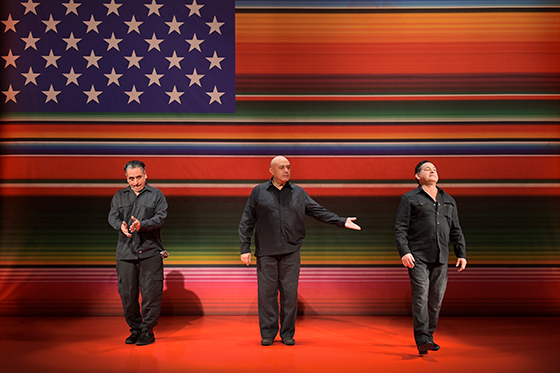 In ways both silly and sincere, searing and subtle, the Chicano comedy troupe known as Culture Clash reveals the futility, ferocity — and the funny — of everything and everyone in America today.

Founded in 1984 in San Francisco’s Mission District, members developed their craft on East Bay streets in Oakland and Berkeley. They return to Berkeley Rep with an updated show, Culture Clash (Still) in America, that shines an unsparing spotlight on the current culture and political climate, with the border wall between the United States and Mexico a central theme.

The 90-minute, no-intermission production performed by cast Richard Montoya, Ricardo Salinas and Herbert Siguenza, led by The Rep’s former associate artistic director Lisa Peterson, is a collection of skits in which almost no one escapes the group’s full-out, hilarious, assault.

Highlights included an early trope-filled episode in which a married couple in Miami simpered at the attention of an interviewer, sniped discreetly and not so discreetly at each other, and talked over each other to marvelously funny results. Montoya as a Puerto Rican in New York, a “New Yorican,” described how to tell Latinos apart based on how they dance the salsa. His delightful physical humor showed Mexicans flap their arms happily, Central Americans shimmy their backsides, Dominicans merengue at warp speeds, spirits flow when Cubans salsa, and Puerto Ricans perform suavely, with mock-serious attitude.

While making audiences laugh, the production offers something deeper, posing the question: Is a country that allows a young girl to be pulled away from her father or where xenophobia can poison the serenity of the morning coffee routine shared by people of different races still recognizable as America? In asking the uncomfortable question, Culture Clash allows us to laugh and to learn simultaneously – and by doing so suggests a roadmap to progressive change, reclaimed democracy and social justice for all.

For tickets and info: berkeleyrep.org