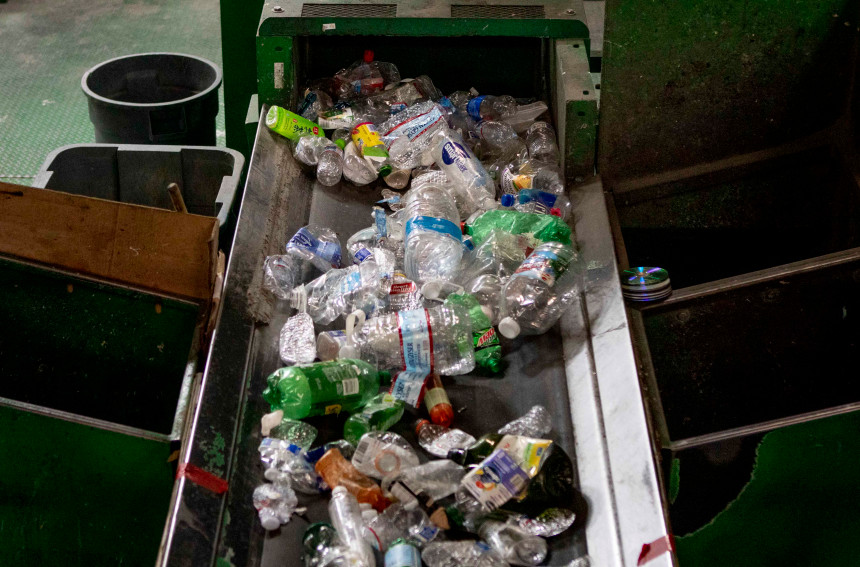 Plastic bottles on a conveyor belt at greenwaste recycling facility in San Jose on July 29, 2019. Photo by Anne Wernikoff for CalMatters.

Even the special interests that helped kill a California Senate bill aimed at reforming beverage bottle recycling say the state needs to fix its broken system. And one lawmaker who voted no on the bill says he might just introduce his own.

Authored by Democratic state Sen. Bob Wieckowski of Fremont, the Beverage Container Recycling Act of 2020 would have required beverage distributors to design a new recycling program — and to help pay for it themselves. But the bill failed a critical juncture after it fell four votes short of passage.

Wieckowski’s bill was one of a handful aimed at addressing two major problems plaguing California’s recycling industry. One is the turmoil in global recycling markets that kicked off when China decided to stop importing much of the world’s waste. The second is the home-grown death of California’s bottle recycling businesses.

That’s the one Wieckowski’s bill aimed to fix. “My hope was to reshape the recycling industry in California so that we have a system that makes it convenient for consumers,” Wieckowski said. “No one — in California or outside California — thinks that the current system in California is working.”

Special interests and legislators instead are focusing on a set of identical bills collectively called the California Circular Economy and Pollution Reduction Act. The Act aims to curb waste from single-use packaging and food service items like containers, forks, and stirrers that Californians use once, and then toss.

Spearheaded by Democratic lawmakers Sen. Ben Allen from Santa Monica and Assemblywoman Lorena Gonzalez of San Diego, the effort calls for cutting three-quarters of the waste from these single-use products in the next ten years. It also requires manufacturers to make such items 100 percent compostable or recyclable starting in 2030.

Those bills are “the big game that we’ve been seeing,” said Tim Schmelzer, vice president of California state relations at the Wine Institute, an advocacy organization that represents the California wine industry.

Wieckowski’s bill, Schmelzer said, “was kind of an unfortunate distraction here in January, and we can get back to work on the real bills.”

Allen voted to pass Wieckowski’s bill — saying it was an important conversation starter.  “If anything, conversations that I had during the debate over the Wieckowski bill gives me confidence that the members understand what a big problem there is, and they are interested in a comprehensive solution to our waste management problems,” Allen said.

But Allen and Gonzalez’s Act — on which Wieckowski is a coauthor — stalled in September. As the Act wound its way through the Legislature, its focus shifted from curbing plastic pollution to reducing waste from all materials. It picked up amendments that ended opposition from plastic and beverage companies represented by powerful trade groups — the American Chemistry Council and the American Beverage Association. It even won support from the plastic company Dow Inc.

The Act also, however, picked up opposition from the glass and wine industries. The Wine Institute’s Schmelzer said the industry was concerned by what he called “unfettered authority” granted to CalRecycle. His organization would also like to see clearer rules surrounding industry plans to meet state recycling targets.

Scott DeFife, president of the Glass Packaging Institute, said his organization needs to see more before switching positions. “We support the goals of the circular economy legislation,” he said. Still, “The details of those issues matter, and need to be fleshed out a little bit before we can really consider changing a stated position.”

“We are going to hold you responsible for doing your part.”

No amendments to the Act have been publicly posted since it stalled in September, so its current breadth is unclear.  But Schmelzer and Allen’s team have been working to resolve the Wine Institute’s concerns so it can drop its opposition. “We’re not this hard, throw-our-bodies-across-the-tracks, we-should-never-try-to-recycle type of objections. It’s like, let’s make this bill work a little better,” Schmelzer said.

In the process, Allen said he’s made an effort to understand industry issues first hand. “I’ve toured secondary [materials recovery facilities], I’ve toured glass bottling facilities. I’ve been to the mattress recyclers, carpet,” he said. “I’ve been to a water bottling facility for plastic bottles, I’ve got the chance to sit down with city waste management people and haulers and recyclers. This is all complicated stuff.”

Ultimately, he said, the bill sets goals — and manufacturers will have to figure out how to meet them. “At the heart of all this, of our efforts, is a message to manufacturers,” Allen said. “We are going to hold you responsible for doing your part, but we’re going to let you do what you need to do.”

“There needs to be a major overhaul.”

Like Wieckowski’s bill, the Act includes beverage bottles that Californians can currently return for rebates— but only starting in 2026.

That’s not soon enough, said Jeff Donlevy, general manager for recycling company Ming’s Resources – East Bay and a board member of Protect CRV, a coalition of recycling centers and processors.

“Recycling centers need help this year, this session — and if we don’t get some legislation this session, we’re going to need the governor to step up with some budget solutions,” he said. “Because more recycling centers will close, especially in the higher operating cost areas like Northern California.”

Under California’s “bottle bill,” Californians pay an extra 5 or 10 cents for most beverages — except milk, wine and hard alcohol. Then, they can trade empty beverage bottles and cans for a refund at recycling centers, or, if there are none nearby, at certain supermarkets. Not all the grocery stores obligated to participate actually do, however, opting instead to pay a fee of $100 a day.

Recycling centers have been shuttering for years, however — leaving Californians who rely on the income in the lurch. The shutdowns culminated with the closure of major California recycler rePlanet’s remaining 284 facilities last August, which the company attributed to high operating costs, lower returns for recycled materials, and insufficient state fees — despite a $25 million payout in 2018 from CalReycle.

Wieckowski’s Beverage Container Recycling Act of 2020 would have scrapped the program, and started over. The bill would have tasked companies and manufacturers that sell beverages to dealers in California with developing a new system and helping to cover the costs. The program would also have included beverages currently excluded from the bottle bill: wine and liquor.

Protect CRV would have supported the bill had it been amended to include more support for existing recycling centers, Donlevy said. “It’s disappointing because it was the only true bottle bill legislation going forward,” Donlevy said. “We supported the overall idea of comprehensive reform, because there needs to be a major overhaul. And Sen. Wieckowski took the lead on it.”

The beer and wine industry raised concerns about requiring beverage distributors to lead the effort. “Distributors are in no position to dictate recycling policies to our suppliers, retail customers, and local governments,” according to a statement from California Beer and Beverage Distributors, a trade association that opposed the bill.

Schmelzer said the Wine Institute also objected to including wine bottles in a redemption program, instead favoring recycling at the curb. “We don’t think a redemption-style program where people have to haul in our wine bottles is an effective way to recycle our products,” he said.

One senator who voted no, Democratic Sen. Bill Dodd of Napa, said he believes the wine industry’s concerns are valid, calling the bill “a bandaid to a major problem in the recycling program.” Still, Dodd said, “The days of them not being involved, and not paying into some sort of program, have to be over.”

While Dodd hasn’t seen the most recent amendments to Allen and Gonzalez’s joint effort, he said it’s fair to say he supports it. And he told CalMatters that after voting no on Wieckowski’s bill, he’s considering introducing his own.

“You can’t say no to something like that, and then not be responsible and offer an alternative,” Dodd said. “What I’d really like to do is to present a bill, an alternative going forward, to bring glass and aluminum and plastic beverage containers all together in a more effective program.”

Dodd said his bill would make producers responsible for the program, not distributors — although his team is still working on what exactly “producer” encompasses. It could include wineries, or major soda companies, or even glass manufacturing companies — “all of them having that stake,” he said.  “If we put it on the producers, they’ll figure out the best way forward.”

Californians might be able to weigh in themselves.  Recology — an employee-owned California recycler — continues to collect signatures for a ballot measure it’s funding. The measure bans polystyrene food containers and takes aim at single-use plastic packaging, containers, and utensils — requiring that manufacturers pay a one-penny tax on these items, sell 25 percent fewer of them, and ensure that what theysell is reusable, recyclable, or compostable by 2030.

The tax, according to a financial analysis, would bring in “a few billion dollars annually.” The goal is to help pay for improvements to recycling infrastructure and offset costs, according to Eric Potashner, Recology’s vice president and senior director of strategic affairs.

Early polling suggests the measure could be a popular one; 64 percent of Californians surveyed said they would definitely or probably vote yes, according to a report Potashner shared with CalMatters. “We’re on schedule to collect enough signatures to get it on the ballot,” he said.

And California Gov. Gavin Newsom nudged the Legislature in January to take action, saying in his budget proposal: “The Administration is committed to working with the Legislature so producers have the responsibility and flexibility to meet recycling requirements for products that ultimately end up in the waste stream.”

Newsom said at a budget press conference that he gave recycling a shout-out to show “a desire to move and a deep desire to look at packaging — to look holistically at the whole recycling space.”