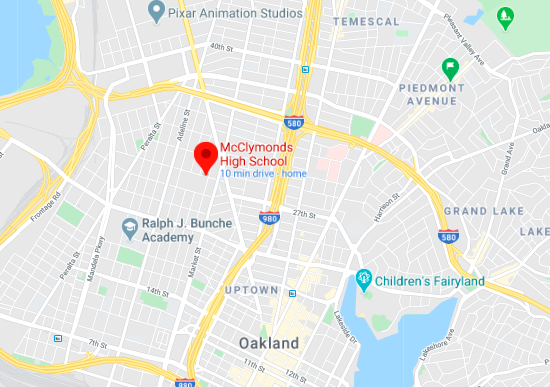 Residents and business owners near Oakland’s McClymonds High School may be affected by a cancer-causing chemical that was found in the school’s groundwater because the contamination apparently originated off the school’s grounds, according to a city councilwoman’s office.

Councilwoman Lynette Gibson McElhaney said in a statement released Thursday evening that, according to the Alameda County Environmental Health Department, the source of the cancer-causing chemical was “a former industrial site a few blocks from the school.” The school is located at 2607 Myrtle St. in West Oakland.

Gibson McElhaney is calling on the California Department of Toxic Substances Control to test the neighborhoods near the school and begin a plan to mitigate and remedy the threat from the carcinogen trichloroethylene. McClymonds High School will be closed “until the ACEHD determines the level of risk to students and educators,” Gibson McElhaney said.

After an expedited review period and a meeting with district officials last Friday, the county and the district elected to test for a potential chemical plume, Sasaki said at a Thursday afternoon news conference. Sasaki and Dilan Roe, the chief of the Alameda County Department of Environmental Health’s Land and Water Division, said the closure was due to the chemical’s potential to vaporize into the campus’ air. “We are concerned that it could be vaporizing … particularly in our buildings,” Sasaki said.

District and county officials know of at least three nearby sites that have high levels of trichloroethylene, which is often used as an industrial solvent and in metal processing. District and county officials could not say for certain how long the compound may have been in the school’s groundwater, but Roe suggested the closure was “really, really conservative” and later added that the campus is the main focus for now. “Right now we don’t have any data that says there is (contaminated) groundwater in the neighborhood,” she said.

School district board member Jumoke Hinton Hodge and Gibson McElhaney both said the contamination is indicative of a long history of environmental injustice in West Oakland.”This is an ongoing concern,” Gibson McElhaney said. Ultimately, Sasaki said, the task of mitigating the public’s exposure to toxic chemicals like trichloroethylene falls at the feet of state environmental health officials and the state Department of Toxic Substances Control.

Roe said the county’s Department of Environmental Health will test the school’s air over the weekend for the chemical’s presence and its concentration will determine the next steps and how soon the school can be reopened. If the closure extends to next week, Sasaki said a temporary location would be found to accommodate the school’s faculty and roughly 350 students. The district is actively seeking an alternate location in the event it becomes necessary to continue school as scheduled.

“We’re going to find a space as quickly as we possibly can to get this back on the road,” Sasaki said. Gibson McElhaney said in her statement Thursday evening that leaders of Oakland faith communities have offered to make their churches available for temporary classrooms if the school district decides that space is needed for classes to resume next week.