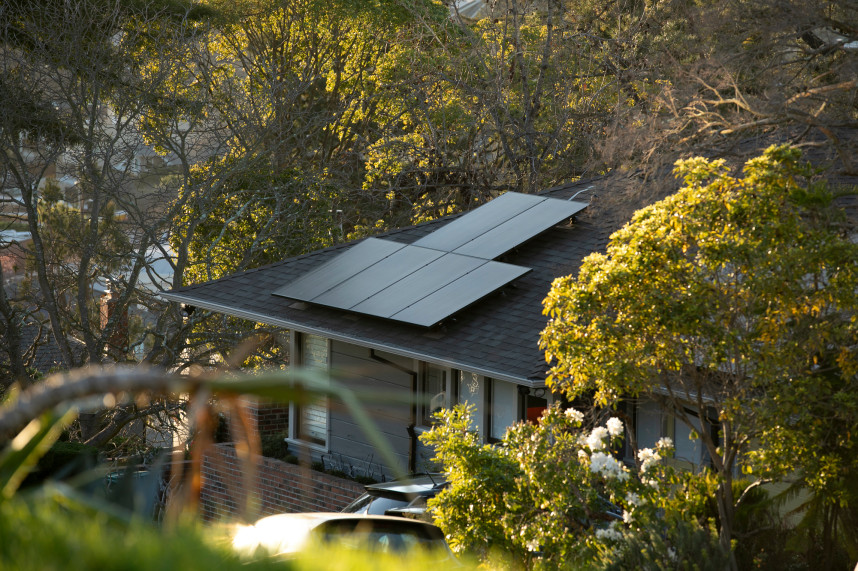 Rooftop solar panels on a home in the Rockridge neighborhood of Oakland. Photo by Anne Wernikoff for CalMatters

Regulators eased off the state’s groundbreaking new law requiring solar rooftops on most new homes, agreeing to allow developers to use a Sacramento utility’s off-site solar installations instead.

The California Energy Commission’s decision ended a months-long standoff between rooftop solar advocates and the Sacramento Municipal Utility District, commonly called SMUD. SMUD had asked regulators to allow developers to use its offsite solar installations rather than the rooftop solar panels required in California starting Jan. 1.

California’s solar regulation already allowed new developments to be powered by an alternative option called community solar, particularly some apartment buildings or shaded homes. The energy commission chose to leave the term community solar essentially undefined, but today’s decision loosens the regulation, allowing developers to decide themselves whether to use rooftop or SMUD’s community solar.

“I think this is something that’s bold, it’s cutting-edge, it’s something that we haven’t seen folks do before,” commission Vice-Chair Janea Scott said at the hearing.

“The concern is that if it’s cheaper for developers to not put solar on people’s homes, then they’re going to opt for that choice,” Laurie Litman of climate group 350 Sacramento said. “That’s going to undermine the solar homes mandate throughout the state because then other areas and other utilities will ask for that waiver as well.”

Other utility companies have not yet said whether they will follow SMUD’s lead but signaled their interest in the outcome. Community-owned public utilities like the Los Angeles Department of Water and Power and the Modesto Irrigation District submitted letters in support of SMUD’s plans. Even investor-owned utility PG&E sent a letter of approval.

Still, major investor-owned utility San Diego Gas & Electric Company does not “have plans to put forth a similar proposal at this time,” said Robert Iezza, communications manager. That’s because municipal utilities like SMUD have more leeway in what they can do compared to their investor-owned counterparts, which are overseen by the California Public Utilities Commission, said Ethan Elkind, director of the climate program at UC Berkeley’s Center for Law, Energy, and the Environment.

SMUD originally proposed drawing from an existing solar installation in Fresno to power new housing developments within its service territory, over 100 miles away. But that plan was fiercely criticized by some environmentalists and rooftop solar advocates who said it was too big, too far away — and already built. The new plan approved today instead proposed to power the homes with solar from a new installation that will be in Sacramento County.

SMUD also pledged it will use only projects that are inside its service territory, 20 megawatts or less and newly built rather than pre-existing.

“There’s absolutely applications where Neighborhood SolarShares makes a lot of sense, and we are trying to fill that gap with options for builders to use instead of restricting them to only a rooftop solution,” said Ed Hamzawi, director of advanced energy solutions with SMUD, of SMUD’s solar program. Even so, he said there’s still “room for both” community and rooftop solar.

Rooftop solar advocates remain unconvinced. SMUD’s program requires participating developers and homeowners to commit to a 20-year contract. While homeowners are able to add solar on their own at any time, advocates say they will miss out on the benefits that make it affordable.

“What is so objectionable about SMUD’s proposal is they’re essentially blocking the growth of rooftop solar so that they can get an edge on their solar farms,” said Dave Rosenfeld, executive director of the Solar Rights Alliance. “What they should be doing is encouraging solar in every possible way.”

SMUD spokesperson Lindsay VanLaningham said their offsite solar program has no upfront cost to residents, guarantees solar power even on cloudy days and is maintained by SMUD, not the homeowner.

Such community solar will matter to some residents. “It’s a viable option for low-income people that cannot pay the upfront cost of getting their solar or are renters,” said Boris Lukanov, co-author of a study on solar power and environmental justice.

Because the new home solar mandate is so new, the energy commission’s decision carries a lot of weight for the future of its enforcement, according to Elkind.

“There is a really strong precedential value here,” he said. “This is a new regulation that just went into effect, and this community solar piece of it hasn’t really been tested, and so it’s going to set a precedent for years to come for how utilities and real estate developers will respond to this regulation.”

Though many environmental groups opposed SMUD’s proposal, like Sierra Club California and 350 Sacramento, the National Resources Defense Council submitted a letter of support for the offsite solar program. Senior scientist Pierre Delforge with the NRDC said “there are things that could be improved” about SMUD’s program, but “it’s a step in the right direction.”