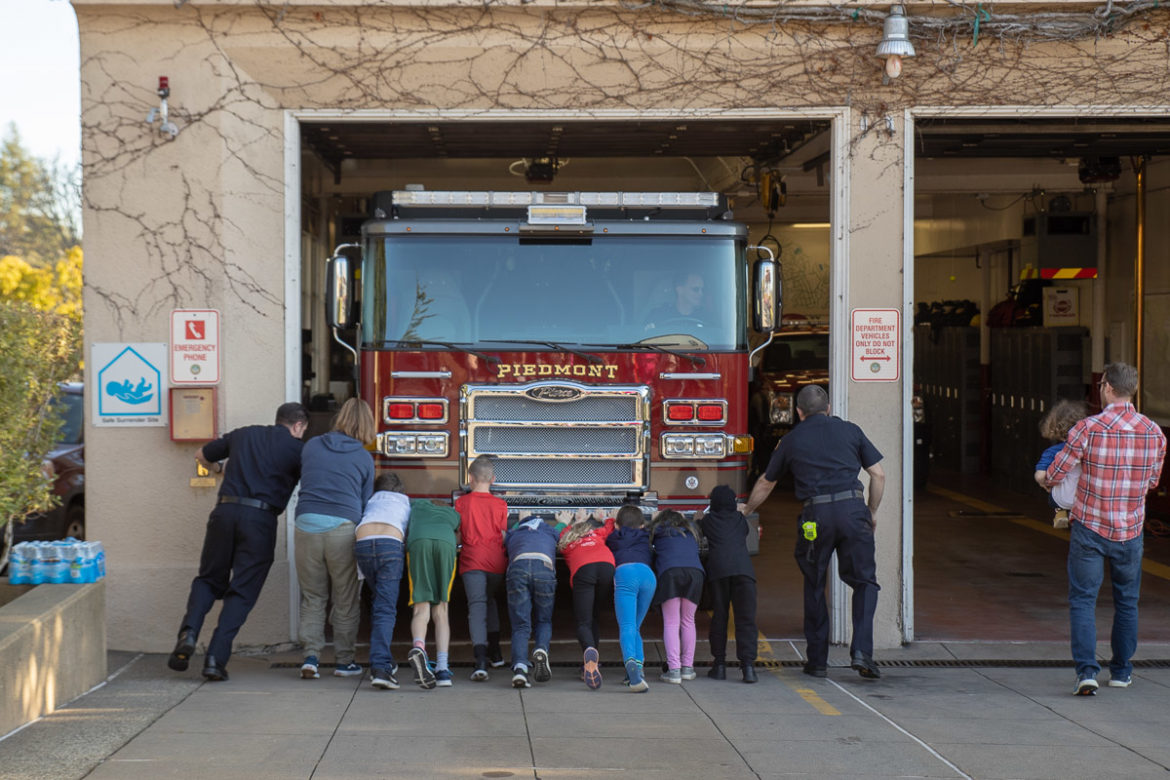 Bret Black said tradition is one of his favorite things about Piedmont, a city he said is willing to embrace them. And on a beautiful, crystal clear Friday afternoon, Black — Piedmont’s fire chief — took an old firefighters’ tradition and made it new in this little city.

“It’s one of the oldest traditions in firefighting,” Black said Friday, as firefighters, city officials and about 50 other people waited for the new unit to arrive at the Vista Avenue fire station.

“We’re a city of traditions,” Black said. “We need to hold on to our identity as much as we can, and highlight our innovations as they come.

“This is one of the most innovative fire engines in the country,” Black said.

The “push in” tradition dates back to the days of horse-pulled, steam-engine firefighting units, which were the standard until the early 1900s. When horse-drawn units returned to the firehouse, getting those units back inside required more precision than the horses generally could provide. At that point, firefighters unhitched the horses and pushed the wagon back into the station themselves.

It’s been 100 years since the last fire horses were put out to pasture, but the “push in” tradition is carried on today by departments all over the United States when a new truck joins the fleet.

The new truck, which  was recently driven to Piedmont from Pierce Manufacturing’s plant in Appleton, Wis., has plenty of modern features. Its braking, steering and suspension are state-of-the-art, handy with this city’s hills and curves. The diesel engine meets current Environmental Protection Agency exhaust standards, and the “clean cab” is both quieter than older designs and better keeps out airborne carcinogens that are a prospective hazard at  almost any fire.

Vista Avenue was closed off Friday afternoon ahead of the push-in ceremony, with the department’s other two trucks brought outside. The new truck had been staged at the city’s Corporation Yard on Moraga Avenue, and at the appointed time Friday rolled up Moraga and onto Highland Avenue for the trip to the firehouse. Its horn marked its arrival at Vista, and the gleaming new truck rolled up for positioning in the firehouse.

Then, for the push-in, Black enlisted kids, about eight of them, along with a few adults. The truck’s engine was turned off, and the young pushers successfully got the engine backed up into the firehouse.

Were the kids really strong enough to do that? “Gravity played a role,” Black said.

The ceremony, and the subsequent rides given to kids of all ages in the new truck, helped accomplish another goal, Black said.

“We want the fire department to be more visible to the community, and this is a way to do that.”

As for the “old 2841,” its career is probably not over. Black said it will be sold to a broker, and that the truck will likely find a home with another department.

“So long as it doesn’t have the same life experiences as in Piedmont, with all these hills, it should have a good long life.”