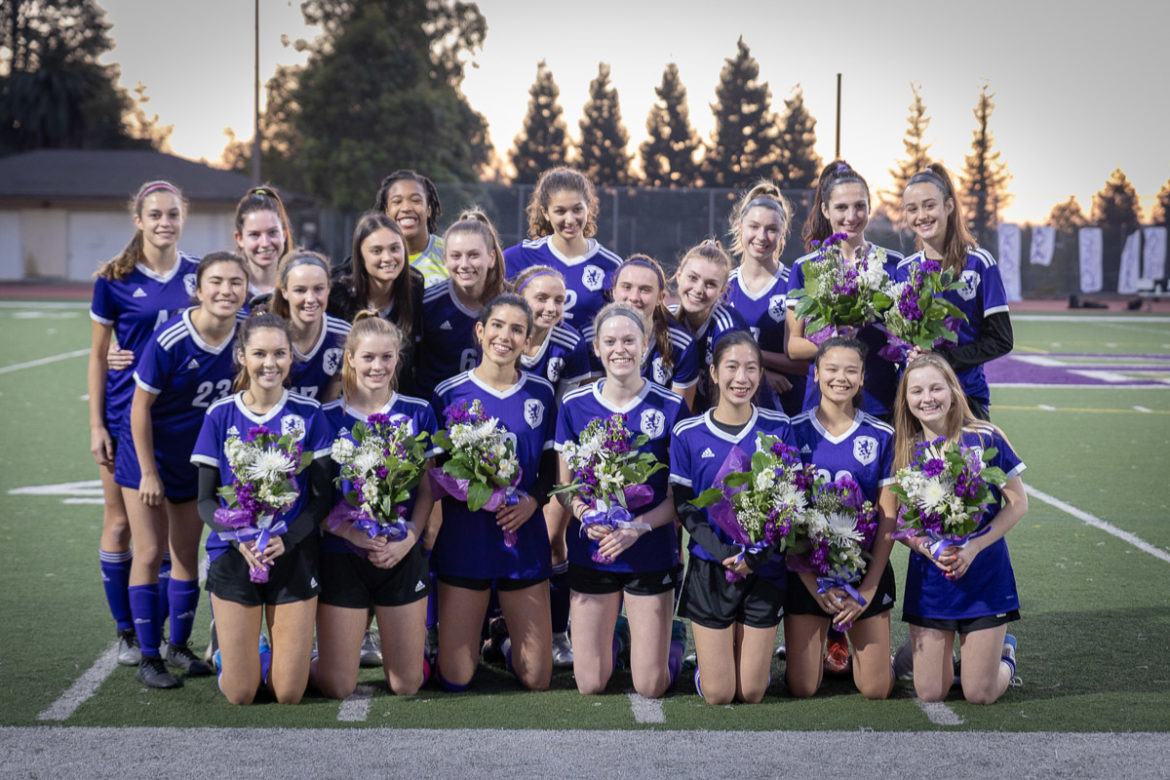 In the opening round of the North Coast Section Division IV playoffs, the #12 seed Piedmont Highlanders upset #5 seed Urban School of San Francisco by a score of 2-1 in a come-from-behind victory at Kezar Stadium on February 19.

The Blues struck first on a quick counter-attack just five minutes into the game.  Urban’s junior stand-out Julietta Seirmarco beat Piedmont down the right flank, drew Piedmont’s central defense toward her, then sent a beautifully lofted cross to the far post, setting up her open teammate for a straightforward one-time finish.

The Highlanders nearly evened the score a few minutes later, as Ceci Brien received a pass on the right sideline, beat one defender, then slotted a diagonal ball through to Peri Ozsoy as she flashed down the center of the field. Ozsoy was able to beat the oncoming Blues goalkeeper to the ball, touch the ball to the outside past the keeper and get a shot off angled back toward the goal, but a quickly recovering Urban defender raced in to clear the ball off the goal line to prevent the score.

Piedmont continued to battle, keeping Urban on its toes, substituting in fresh legs on the flanks and the front line, and rotating positions among the steadfast senior foursome of Brien, Ozsoy, Ashley Nelson, and Fiona Hunter.

With Nelson moving up to the front line in the closing minutes of the half from her defending midfield position, she was fouled near the corner flag as her defender held her back from turning the corner toward goal. Nelson served up the free kick into the center of the box, where Hunter won the ball in the air, heading it down just inside the post to tie the score with three minutes remaining in the half.

But Piedmont would not be satisfied with just leveling the score. With the Highlanders deep into the Blues’ end, Zozo Tahawi served a ball into space across the top of the box. Outside back Tucker Donahue charged and launched a one-time shot toward the far corner of the goal. Urban’s goalkeeper was able to deflect the shot, but in the ensuing scrum, Emily Fitzgerald pounced on the loose ball and sent a low diagonal shot into the corner for what proved to be the game-winning goal.

The only damage Urban was able to inflict on Piedmont in the second half was some hard fouls, as the game became increasingly physical and both teams worked to shut down the other’s scoring threats. Urban’s attempts to send long balls forward were thwarted by the combination of Piedmont’s center backs, with sophomore Nina Goldberg providing strong clearances out of the air, and speedy senior Lucy Barrett tracking down everything else.

The Blues best chances of the second half came on long range free kicks, but the Highlanders’ freshman keeper Morgan Hunt snagged the high shots cleanly out of the air each time. As the end of the game neared, the Highlanders were able to possess the ball and run out the clock, bringing the Blues’ season to an end, and earning a spot in the NCS quarterfinals.