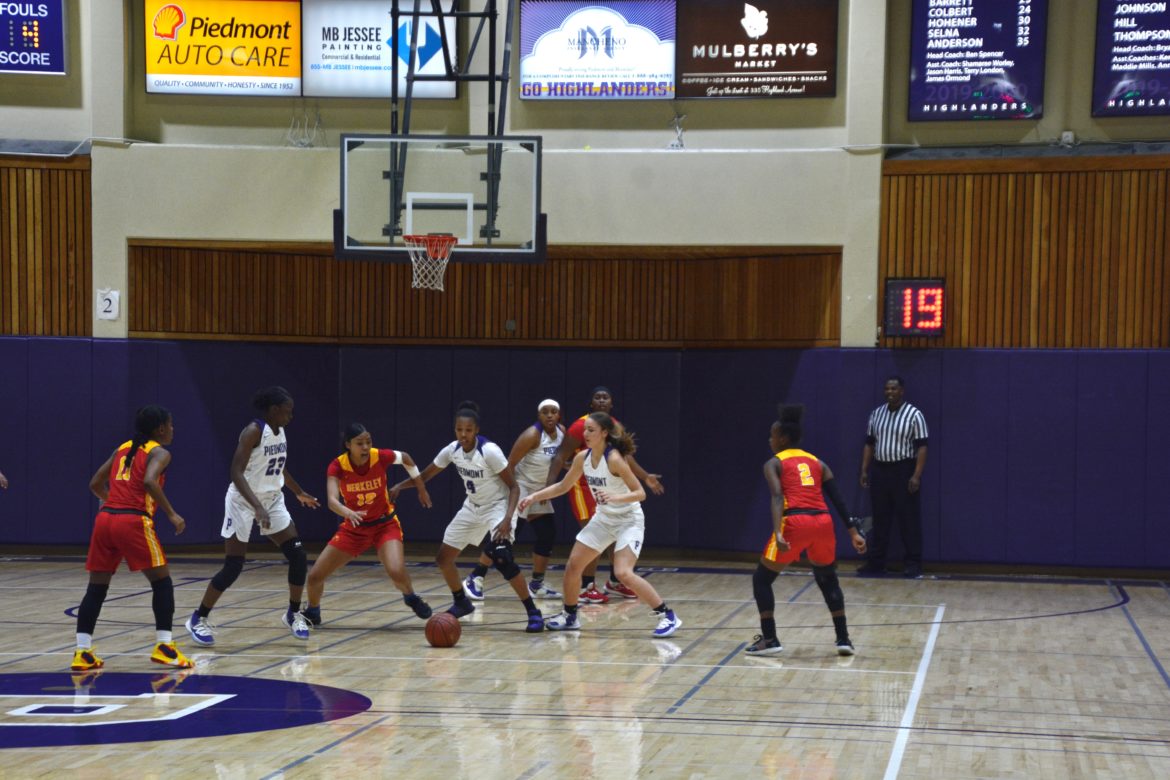 Nakilah Johnson scored 14 points and Maddie Hill added 12 to help lead the Highlanders to a 49-43 win over visiting Berkeley on February 12.

The Highlanders are now 19-6 on the season and 6-3 in West Alameda County Conference play. They conclude the regular season by celebrating senior night on February 14 prior to their home game against Alameda at 7 p.m.

Piedmont used a 19-0 run from early in the game into the second quarter to take the lead. With the score 23-7, the Highlanders allowed the Yellowjackets to close the gap to three at one point and six at the end.

“I thought we started out pretty well,” Piedmont coach Bryan Gardere said. “The ball was moving, shots were going in, and then we just kind of stalled out a little bit.”

“At the end of the day, we’ll take the win. We need to probably clean it up a little bit, but at this point we’ll take them any way we can get them.”

Berkeley took an early 7-4 lead before Piedmont went on its big run. Johnson scored seven of the first 12 points to get the Highlanders going.

The problem came in the later stages of the second quarter. The Yellowjackets got their first points of the quarter when Isabella Jensen-Williams scored with three minutes, eight seconds to go until halftime. Piedmont went scoreless the rest of the half.

The good news is the Highlanders defense remained stout, and Berkeley managed just a 6-0 run to close the half, with Piedmont taking a 23-13 lead into the locker room. The Yellowjackets’ Jade Brewer, who had been scoreless in the first half, scored her team’s first nine points of the second half. Berkeley closed to 27-24 on a pair of Jensen-Williams free throws.

Trinity Zamora and Johnson got Piedmont going again with back-to-back 3-pointers. The Highlanders pushed the lead back to 11 in the fourth quarter and made it home on top.

Gardere noted that Hill, a freshman guard, is a key for Piedmont beyond the big three of Johnson, Zamora, and Meadows.

“I think when she (Hill) scores double-figures, we’re a much better team,” Gardere said. “You need your regulars to kind of step up, but you need others to do the same. Maddie, when her shot’s dropping or she’s finishing, it really helps us out offensively.”

Said Hill, “I’ve improved a lot on my shooting percentage and handling the ball. It’s a lot of responsibility.”

The Highlanders played with 10 players against Berkeley – the fullest bench they’ve had since the beginning of the season. Gardere said February 11 was the first time the varsity team could scrimmage five on five in months.

“We had 10 varsity Piedmont basketball girls yesterday,” he said. “It was different. We want to be healthy. The last two or three Saturdays we’ve had shooting practices or optional. We’re trying to regroup. Trying to ice, stretch. Do the best we can to try to make a run at the end of the year. And getting people healthy and getting fresh is probably the most important thing.”