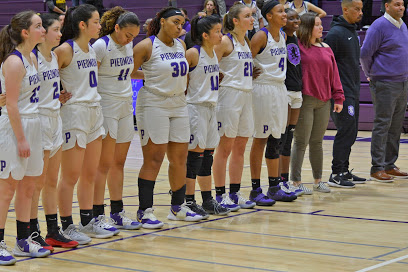 It seemed like the golden opportunity the Highlanders had been waiting for all night long. Down in the second half at Lick-Wilmerding-San Francisco on February 22, Piedmont forced the Tigers’ star sophomore guard Annabel Schneiberg to the bench with foul trouble. Highlander energy was up and it was a nine-point game.

In the final two minutes of the third quarter, Ava Grey made three 3-pointers for Lick-Wilmerding, the final two from Steph Curry distance, the final one at the buzzer. Suddenly, the lead was 19 – the biggest of the night. The Tigers went on to a 69-45 win, eliminating Piedmont from the North Coast Section Division 4 playoffs.

“I was a little surprised … that third quarter, we had a small spurt where we were pretty aggressive,” Piedmont coach Bryan Gardere said. “And other than that, I didn’t think we played very well. We were pretty surprised by that, I thought we were over that. But you have to give them credit. They shot the ball really well, we didn’t shoot the ball well at all, and that’s a bad combination.”

The Tigers led from the start, opening the game by scoring the first five points. Piedmont was in the game early, trailing just 10-7 at the end of the first quarter. In the second quarter, Schneiberg got going, scoring 10 of her game-high 23 points, including two 3-pointers and a traditional 3-point play. Lick-Wilmerding opened up a 29-13 lead before Maddy Meadows hit a late 3-pointer for Piedmont to make it 29-16 at the break.

In the third quarter, Schneiberg picked up her third foul and headed to the bench with three minutes, 12 seconds left. Trinity Zamora had scored a basket on the play, making the score 38-26. Zamora missed her free thrown (the Highlanders missed 11 of their 19 free throws in the game), but Piedmont closed to 38-29 on a 3-point play by Maddie Hill with 2:08 to go.

Grey then responded with the first of her 3-pointers. Piedmont scored just one free throw the rest of the quarter, and Grey hit the other two daggers. In the final period, the Tigers opened up a 30-point lead.

Schneiberg finished with 23 points, 10 rebounds, two assists, and a blocked shot. Her ball-handling belied her youth as she seemed to dribble through any defense the Highlanders threw at her. Grey finished with 14 points and 11 rebounds. Daisy Maunupau had 13 points and 10 rebounds, and Dominique Cabading added 12 points for Lick.

Lick-Wilmerding (28-1) advances to the semifinals against top-seed St. Mary’s-Albany on February 26.  The Tigers also clinched an automatic berth in the California Interscholastic Federation (CIF) tournament.

The Highlanders’ season is possibly over at 21-7. Gardere expressed the hope that his team could still earn a berth in the CIF tournament as an at-large team (the top four teams in the Division 4 bracket earn automatic berths). However, the NCS basketball playoff guide indicates that preference will be given to teams in divisions 1-3, as only two teams in those divisions receive automatic berths.

“Most definitely, I want to play again,” Johnson said. “I would tell (the seeding committee) we have the heart. We deserve the chance.”