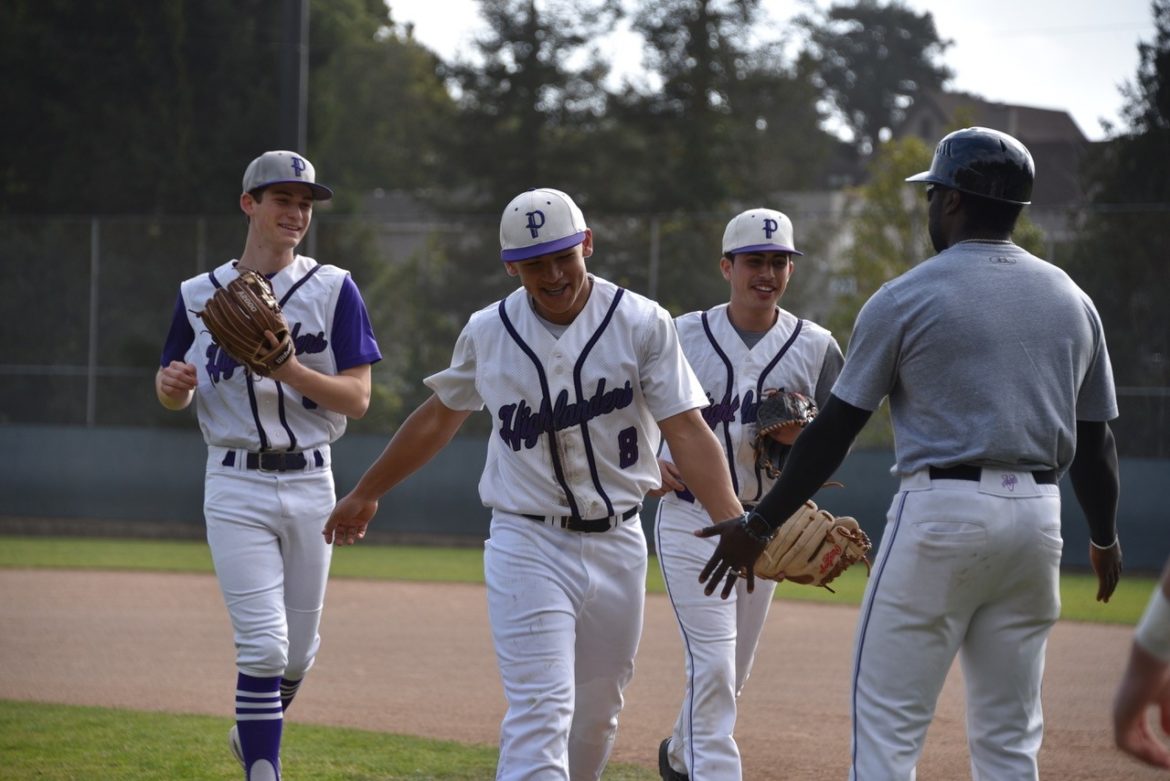 The Highlanders beat long-time rival St. Mary’s 3-2 at Witter field on February 26 in their first game of 2020. Three pitchers, with help from the defense, combined to limit the Panthers to two runs, and the hitters put just enough well-placed balls in play to prevail.

The Highlanders jumped out in front 2-0 in the top of the first inning. Freshman second baseman Michael Aikawa walked with one out. Singles by rightfielder Kyle Spanier and third baseman Lars Derr loaded the bases. Catcher Cal Barna drove in the first run with a sacrifice fly to right, and pitcher Ben Levinson knocked in the second run with a single to left.

Clutch defense helped maintain the lead for Piedmont. In the third inning, Barna made a perfect throw to second to catch a would-be base stealer and stifle a St. Mary’s rally. In the fourth, a Panther double plated one run, but the Highlanders cut down the tying run at home plate on a quick relay from centerfielder Brian Cain to shortstop Nico DeFazio to Barna, who made an athletic tag on the throw up the third baseline.

Piedmont came right back in the bottom of the fourth with a run to extend the lead to two. After Barna and Levinson singled, first baseman Abe Barnes advanced them to second and third. Leftfielder Aiden Mitchell drove in the run with a sharp single past the drawn-in St. Mary’s infield.

That third run would hold up with the help of more strong defense. With Barnes pitching in the fifth, Aikawa and DeFazio turned a nifty 4-6-3 double play. After the Panthers scored a run to narrow the lead to 3-2, and with runners at first and third and two outs, Barnes picked the runner off first, and DeFazio tagged him out before the tying run could score.

Derr came on and shut St. Mary’s down the rest of the way, striking out the side in the sixth and recording the save with a 1-2-3 seventh. Derr struck out four in his two innings of work, allowing no hits and one walk.

Coach Eric Olson was pleased with the effort and result: “Great team win. Pitching was excellent, especially Ben Levinson with three great innings to start the game and Lars Derr with a six-out save. Timely defense and hitting were key to edge out the 3-2 victory. We have a lot of improvement to make, but an opening day win against a quality opponent is a great start.”

Next up for the Highlanders are the St. Helena Saints at Witter field on February 29 at 2 pm.