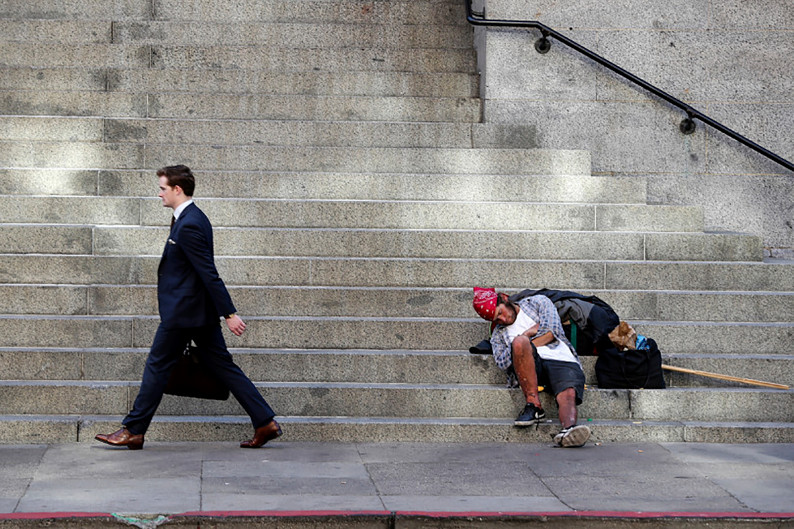 In his call to action on the state’s homelessness crisis, Gov. Gavin Newsom zeroed in on the need to treat serious mental illnesses and substance use disorders among people who are chronically homeless.

About a third of homeless people have serious mental illness, according to the Treatment Advocacy Center — even by conservative estimates, that encompasses tens of thousands of Californians. Many of them end up cycling in and out of emergency rooms and jails; close to a third of inmates in California’s jails have a documented mental illness.

In his annual State of the State address today, here’s what the governor proposed to deal with people who have fallen through holes in the safety net:

Newsom, in calling for changes to the state’s involuntary treatment laws, described the importance of people “being capable of accepting help, to get off the streets and into treatment in the first place.”

“Some, tragically, are not,” he said.

But changing the law — especially the definition of “grave disability” — is highly controversial, and has been for a long time.

The Lanterman-Petris-Short Act, which passed in 1967, imposed specific timeframes on involuntary confinement and limited involuntary holds to those deemed a danger to themselves or others, or gravely disabled.

Families say the law can prevent them from helping loved ones who don’t recognize that they are ill and need treatment. Disability rights advocates worry that compelling treatment is ineffective and can violate people’s civil rights.

In recent years, several bills that have attempted to alter the law have failed.

That may change with an audit of Lanterman-Petris-Short, which State Auditor Elaine Howle is expected to release in March, along with specific recommendations.

A pilot project to expand conservatorships without altering Lanterman-Petris-Short is underway in San Francisco, and Newsom said in his speech that he wants to see that pilot expand statewide.

But, even without the controversy, changing laws to expand conservatorships isn’t a simple fix. County conservators have been overwhelmed with a huge influx in new clients in recent years, even as the number of appropriate facilities to house them is shrinking.

Newsom himself noted: “Policy is an empty promise without creating more placements.”

He also mentioned changing the conditions imposed on counties to make it easier for them to implement Laura’s Law — currently, some counties haven’t adopted the law because doing so requires them to provide an array of intensive services. The law, which passed in 2002, was named for Laura Wilcox, a college student who was shot and killed by a man who had refused psychiatric treatment.Counties that adopt the law can compel people to accept community-based outpatient treatment through the court system.

Another proposal that’s already proving contentious is the call to expand the kinds of services that can be funded through Proposition 63, the Mental Health Services Act.

When voters passed the act in November 2004, they imposed an additional 1% income tax on millionaires in the state. That money was intended to expand county mental health offerings.

Since then, the Mental Health Services Act has brought billions of dollars into a long under-resourced system. But some critics have been frustrated to see the money sometimes fund programs like horse therapy for troubled teens while the seriously mentally ill go without other important treatments. Others have pointed out, as Newsom did in his remarks, that many counties have not spent all their funds — sometimes sitting on huge reserves.

A state audit in 2018 found that counties and mental health agencies had accumulated hundreds of millions in unspent Mental Health Services Act funds, and required stronger state direction and oversight.

Newsom underscored his frustration in his address, criticizing counties for currently having more than $160 million in unspent funds. “My message is this: spend your mental health dollars by June 30th, or we’ll make sure they get spent for you,” he said.

But loosening the restrictions on what the funding pays for has some county mental health directors nervous, because they don’t want to see dollars diverted away from mental health services.

The California Behavioral Health Directors Association released a statement applauding much of Newsom’s speech, but emphasizing that the state should “consider the need for additional investments, rather than shifts” in what the Mental Health Services Act funds.

Simplify the treatment path for people in crisis

Newsom devoted a significant portion of his speech to CalAIM, which was recently rebranded Medi-Cal Healthier California for All. That initiative seeks to dramatically overhaul the state’s Medi-Cal system by integrating mental health, substance abuse treatment and physical health services, increasing funding and making access to mental health care simpler.

Low-income people with serious mental illnesses often have to navigate various bureaucracies to get the help they need — being shuffled from one agency to the next feels can be overwhelming. In the pilot programs Newsom wants to expand, individuals are provided with health and medical treatment as well as social services.

“Doctors should be able to write prescriptions for housing the same way they do for insulin or antibiotics,” he said.

The initiative hinges on two important federal waivers, which allow California to operate its Medicaid program according to special rules. These waivers are expiring this year, which could present an opportunity to change how the Medicaid program is both funded and run — assuming the Trump administration permits them.

For some people with serious mental illnesses and substance use disorders, hope of recovery can be severely impeded by the lack of a place to sleep. Services without housing don’t work well for them; neither does housing without services.

One problem the governor referenced in his address: The state’s spate of board and care home closures. Newsom said he wants to stabilize and expand the number of these homes, but that will prove costly. This week, San Francisco officials announced a plan to purchase two such homes.

The homes are rarely viewed as an ideal housing model for low-income people with mental illness and other disabilities — some are plagued with rat and bedbug infestations.

But they are often the only relatively affordable housing option available to a very vulnerable population. Tenants pay a government-set monthly rent of $1,058 out of their monthly federal SSI checks to cover housing, 24-hour-care and three daily meals.

These homes are fast disappearing. Many owners are selling their properties because they are highly valuable. Once they go to the private market, they’re unlikely to come back.

One topic that the governor did not bring up during his State of the State was his desire to strengthen enforcement of mental health parity laws, which hold private insurers accountable for providing equal access to health and mental health care.

He spoke forcefully on the topic when he revealed his budget plan in January, saying he plans to go “aggressively on the parity issue as a mandate and a mission.” At that time he also chastised the Department of Managed Health Care, saying it will be “getting in the business of real enforcement. Not tacit enforcement….They just need to do their damn job, and they need to go aggressively on parity.”

What that increased enforcement will look like remains to be seen, and today’s speech didn’t shed any further light on it. The governor is expected to be more specific in the spring, when he releases his revised budget.

The statewide shortage of mental health providers is another significant issue that wasn’t discussed during the State of the State, but will be a key component of any efforts to reform the state’s troubled mental health care system.