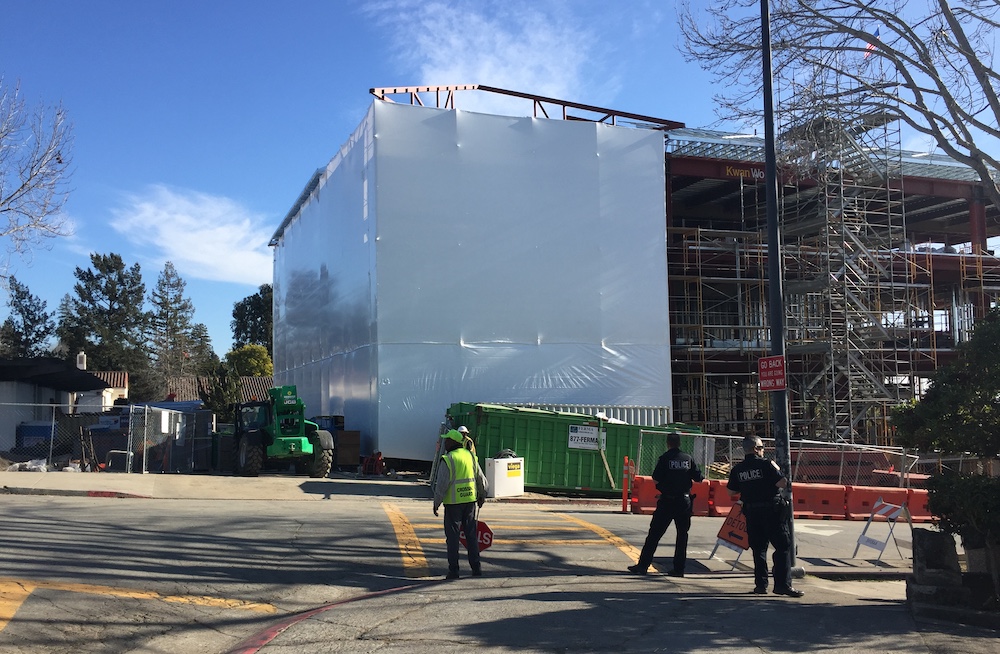 PUSD Director of Facilities Pete Palmer presented the latest Measure H1 construction update at the Feb. 12 School Board meeting, including a schedule of key milestones between now and completion of the new $31.1 million STEAM building, which is expected in early August.  He also described the measures in place to ensure that the STEAM project remains on schedule.

Palmer reported that the District has completed the structural components of the STEAM building, a critical milestone, and the State agency that oversees public school construction has signed off on these structural elements.  The District is now completing the roof structure and skinning the building with large white panels that will temporarily water-proof the building. This water-proofing will make it possible to install wiring, duct work, sheet rock, and other internal components that cannot be exposed to moisture.  The white panels have already been installed on the south side of the building, facing the Quad and Student Center, and will wrap around to cover the east side next, then the north side, and finally the west side to fully enclose the structure.

Palmer praised the contractors and subcontractors, saying their “hitting the milestones has been spot on.”

There are weekly meetings to keep the STEAM project on schedule for completion for the start of the 2020-21 school year.  “Each week there is a six-week look-ahead to discuss key milestones to keep all work areas on track,” Palmer said. Also, there is a master schedule that is reviewed weekly, to ensure the proper sequencing of tasks.  Some of the contractors have been working 10-hour days and some Saturdays to keep on schedule. Palmer thanked community members for being “understanding, patient, and cooperative” during the construction.

Palmer explained that the sequencing of work is critical to timely completion.  For example, interior work in the STEAM building will start on the second floor, followed by the third floor, then the first floor, and finally the basement, because there are 50 workers and “the crews can’t be on top of each other.”

School Board member Cory Smegal said parents often ask her whether the STEAM building will be done for the start of school.  “Yes! It’s going to be done!”, she said.

Superintendent Randall Booker praised staff and students for their patience and flexibility, acknowledging the disruption caused by construction on campus.

Also this summer, the District will be doing site work, landscaping, and repaving some of the street and sidewalk near the STEAM building.  At the same time, the District will empty and tear down the 10s building, completing the noisy and dusty demolition work before staff return to campus on August 7. Classes will start on August 11.

In response to student questions, Palmer said that the lockers currently in the 10s building may be moved into the basement of the 30s building.  No lockers are planned for the STEAM building, to keep the hallways as wide as possible.

Palmer gave an overview of facilities improvements planned for the February break that are unrelated to the STEAM building.  The District will begin installation of new climate-control equipment at Havens.  This installation will be completed this summer. The District will begin painting the interior of the Piedmont High School 20s building.  This painting, too, will be completed this summer.

Wrapping up his report on the work planned for this summer, Palmer said, “We’re going to really stress for community members to stay away from Magnolia this summer.”