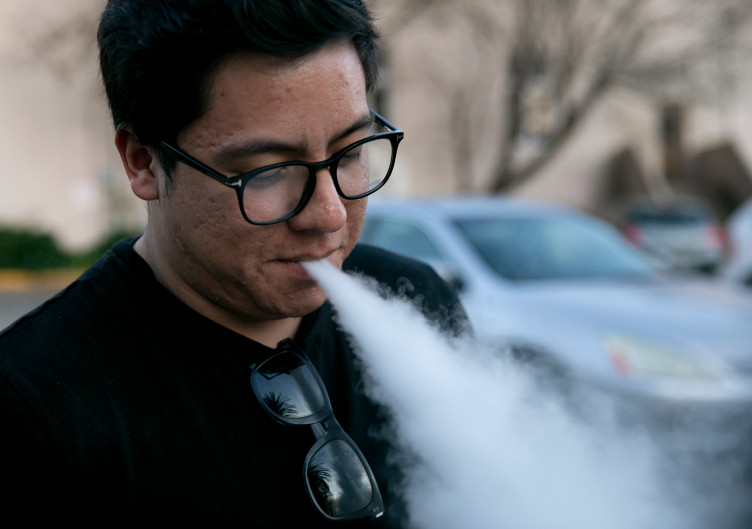 Jorge Hernandez, 21, vapes near UC Berkeley campus. Hernandez has been vaping for a year and half. Photo by Anne Wernikoff for CalMatters

Officials here pride themselves as national leaders in protecting the health of Californians — so much so that conservatives deride it as the “nanny-state.” And that’s particularly true when it comes to its youth.

Yet California is behind some other states and the Trump administration when it comes to cracking down on flavored tobacco and e-cigarette use — nor has it moved to block the sale of flavored vape products containing cannabis. San Francisco-based Juul Labs Inc., maker of vape pens and nicotine pods, poured hundreds of thousands into lobbying and political campaigns — and until now successfully quashed bills to ban flavored tobacco in California.

This year could change that. The skyrocketing use of flavored vape products among kids, a rash of vape-related hospitalizations and deaths, and the governor’s public support for a ban on flavors could turn the tide. So could a market shift at Juul, which amid evidence that flavors entice teen users, has stopped U.S. sales of flavored pods including mango and mint.

Last year eight other states, temporarily at least, banned flavored e-cigarettes, prompting legal challenges. Several states similarly prohibited the sale of flavored cannabis products. So far in 2020, of at least 184 vaping bills in 20 state legislatures, 47 include flavor restrictions, according to the National Conference of State Legislatures.

At least 60 California cities and counties have taken matters into their own hands by banning flavors or restricting the sale of e-cigarettes. In San Francisco, the first e-cigarette sales ban in the nation went into effect in January.

“Politics gets down to money,” said Jim Knox, director of government relations for the American Cancer Society Cancer Action Network. “The tobacco industry has been for decades, and remains, a very substantial power at the state Capitol.”

When e-cigarettes hit the U.S. market in 2007, there was little regulation of sales, advertising or use. They were typically touted as a tar-free alternative to smoking, a way to reduce cigarette consumption. But they also surged in popularity among new, younger users. As of last year, 1 in 10 middle-schoolers and a quarter of high-schoolers reported using e-cigarettes in 2019, according to the Centers for Disease Control and Prevention.

Among recent middle-schoolers users, 49 percent said they used a flavored product in 2018. Among high school tobacco users that number was 67 percent.

That led some California legislators to try to regulate vaping — triggering fierce opposition from tobacco companies and the vape industry.

Last year in the Assembly, a bill to ban the sale of flavored tobacco products was killed without even a hearing in the Assembly’s Government Organization Committee, chaired by Merced Democrat Adam Gray.

The committee is “the main vise the legislative leadership has used to deliver for big tobacco,” said Stan Glantz, UC San Francisco professor of medicine and director of its Center for Tobacco Control Research and Education.

“Of all the tobacco control policies that are out there,” Glantz continued, “the one they are most desperate to stop is flavor bans. Because that goes to the key of how they get all of these kids addicted.”

A similar 2019 flavor ban proposal in the California Senate grew so weakened by amendments that its author abandoned the bill.

Then reports of vaping tragedies nationwide began mounting — as of last week, vaping had caused 2,600 hospitalizations and 60 deaths nationwide. The majority of those who became sick were vaping tetrahydrocannabinol, or THC, a cannabis product, according to the Centers for Disease Control and Prevention, which identified the culprit as the additive vitamin E acetate. But the mounting health toll heightened awareness of the rising trend of teens vaping cannabis and tobacco.

President Donald Trump initially called in September for a ban on all flavored e-cigarette products, but then backpedaled. Instead, in January his administration issued a more limited mandate that manufacturers stop selling certain products, such as pre-filled flavor pods. Exempted are menthol cartridges and also tank-based systems that allow users to re-fill vape pens with their choice of flavored liquid.

The governor also has said he supports a new flavor-ban bill sponsored by the same senator whose bill was stymied last year — and like last year’s, the new state bill would bar more types of flavored products than the Trump administration has restricted.

“This is affecting our youth,” Hill said. “The gateway is the flavored product, and we can’t leave it to the industry to police themselves, because they failed to do that.”

“We are going to do more than the federal government did on the flavors,” Newsom said when he released his proposed budget earlier this month. “And I just want to thank Jerry Hill and everybody else upstairs for their leadership on this. I’m all in on what they are doing.”

Hill’s bill faces opposition from some quarters of the tobacco and vaping industries, and millions of smokers or vapers who oppose any restrictions.

“The unintended consequences of policies like these could be more young people smoking cigarettes or switching to illicit THC cartridges,” said Gregory Conley, president of the American Vaping Association, in a statement. “Prohibitionist groups can complain all day long but the reality is that flavored vaping products do help adult smokers quit.”

Juul spokesman Ted Kwong said Juul does not have a position on the proposed flavor ban. The company stopped its U.S. sales of mint-flavored pods in November and had previously ended sales of other flavors including mango. Only its menthol products would be directly affected by Hill’s flavor-ban bill, although critics note that teens who start vaping flavored pods made by other companies could eventually “outgrow” sweet flavors and switch to Juul’s products.

In a statement, Juul said, “We remain focused on resetting the vapor category in the U.S. and earning the trust of society by working cooperatively with lawmakers, regulators, public health officials, and other stakeholders to combat underage use and convert adult smokers from combustible cigarettes…..Our customer base is the world’s 1 billion adult smokers and we do not intend to attract underage users.”

Still, last year Juul spent more than $600,000 on political donations and lobbying activities in California, including $20,000 it gave to the Los Angeles Democratic Party, according to state records. At a state Democratic Party convention last summer, logos identifying Juul as a sponsor flashed on big screens.

“The tobacco industry will make every conceivable effort to curry favor, and that makes them a very formidable adversary,” said Knox. “They have untold amounts of money and they are spending it on lobbying.”

Partial reports for last year indicate that Juul gave Assemblyman Gray’s Valley Solutions ballot committee $4,700. The year before,  Gray received $8,000 and the committee received $25,000. In total, since 2014, Gray has received more than $200,000 from Juul, RJ Reynolds and other companies. On the American Cancer Society Cancer Action Network’s tracker of elected officials who take tobacco money, Gray is at the top of the list.

“Clearly we have a chair who is friendly to the tobacco industry,” Knox said. “And that’s not new, he carries on a tradition that has been going on for decades.”

Gray’s office said that his positions arise from him balancing the issues of adult choice, government interference and the rising risk of teens using tobacco.

In an email statement, he said, “If you want to support my agenda, my voting record, and the things I stand for, I’m happy to receive that support. But it has zero role in how I represent my district or how I make decisions on public policy.”

A pending bill by Gray would treat vape products more like alcohol — with restrictions on ads and signs, and stronger penalties for retailers who sell to minors. It originally would have restricted candy and fruit flavors but not mint or menthol, but those provisions were struck from the bill in previous committees.

This year, Gray intends to amend the bill to include a tax on pods of nicotine used in e-cigarettes to match how packs of cigarettes are taxed, at about $2.87 a box, according to his legislative director, Adam Capper.

Gray has argued for focusing attention on what he has characterized as a critical but under-emphasized problem: cannabis vaping. In a commentary for CalMatters last September, he stressed that vaping hospitalizations and deaths have primarily occurred after the person vaped marijuana products. Capper said his boss is considering options to regulate flavored cannabis vape products by including it in his existing bill or doing so through another vehicle.

Flavored vape cartridges and liquids made with THC are used in vape pens and sold in legal vape shops, and illicitly. Like nicotine, they also come in a variety of fruit and candy flavors including grape, pineapple, sherbet and gelato.

It’s unclear how many Californians are vaping cannabis but nationally, in five states including California where marijuana is legal, vapes made up nearly a quarter of the share of sales of cannabis in the first three quarters of 2019, according to BDS Analytics, a global cannabinoid market research and analytics company based in Colorado.

The research links the vape-related lung illness outbreak last year to a drop in cannabis vape sales. The industry saw the monthly sales of cannabis vape products, including flavors, drop from a high of $160 million in August to $119 million in October, BDS Analytics reported for the states of California, Arizona, Colorado, Nevada and Oregon. And in California, cannabis vape sales dropped 20 percent between August and September, when sales totaled $66 million.

Those figures do not include the sales of illicit cannabis vaping products, which the federal government says are mainly to blame for the vape-related lung illness. In California, experts estimate that market is still larger than the legal market because of the challenges to enter the industry.

The Bureau of Cannabis Control has been conducting seizures at unlicensed marijuana shops, and in December confiscated more than 10,000 illegal vape pens in Los Angeles. Those products were tested and the state found they contained undisclosed additives and also had less THC than they claimed to have. To help consumers ensure they are buying from a legitimate cannabis retailer, the state has launched a campaign to get users to scan a QR code linking to the state’s online license database.