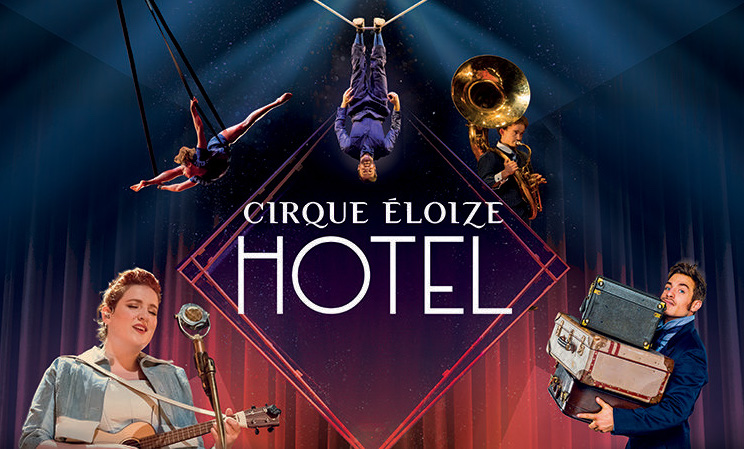 Yesterday’s circus acts under the big top have long been eclipsed by the cutting-edge technology and sophisticated sensibility of the contemporary circus – the likes of which Montreal-based Cirque Éloize brings to Zellerbach Hall this weekend in their 2018 production, Hotel.

To the delight of young and old alike, 85-minutes of uproarious comedy are delivered through a mix of acrobatics, aerial routines, and live music.

From the moment you ‘check in’ to this show, set as a plush Art Deco hotel, Hotel provides a platform for all manner of entertainment and silliness. There are bellhops on tightropes, janitors juggling objects and, often enough, each other. Hotel staff perform heart-stopping aerial stunts on trapeze, ropes, slack wire or silks, while chambermaids and a maître d’hotel animate hoops and poles.

There are spectacular group and solo displays involving somersaults and ballet-worthy pirouettes in Cyr Wheels (see below). Whether right-side up or upside down, hotel guests are likely to burst into song, blast a trombone, toot on a trumpet or wail on a saxophone.

Scaled down for concert hall venues, Cirque Éloize is still grand in its ambition, offering the 3.5 million audience members—over 5,500 shows in more than 350 cities in their 27-year history—stories relevant to real life. Delighting audiences of all ages with physical feats of strength, coordination and daring, the company takes on topics like home, family, privacy, community, celebrity culture and adventure.

Hotel benefits from songs written by Éloi Painchaud, whose indie pop tunes are sung in both French and English throughout the production. In another nod to multiculturalism, Chinese music, dance, and circus arts, infuse much of the action – as if to say, this hotel is a place that is not French, American, Chinese — or belonging to any other nation in the world. Rather it is a place that reflects the universal desire to belong.

In the case of Hotel, however, rarely does the gravitas of contemplating one’s position in the universe bring so much delight and joy as the comedic display of this gravity-defying entertainment.