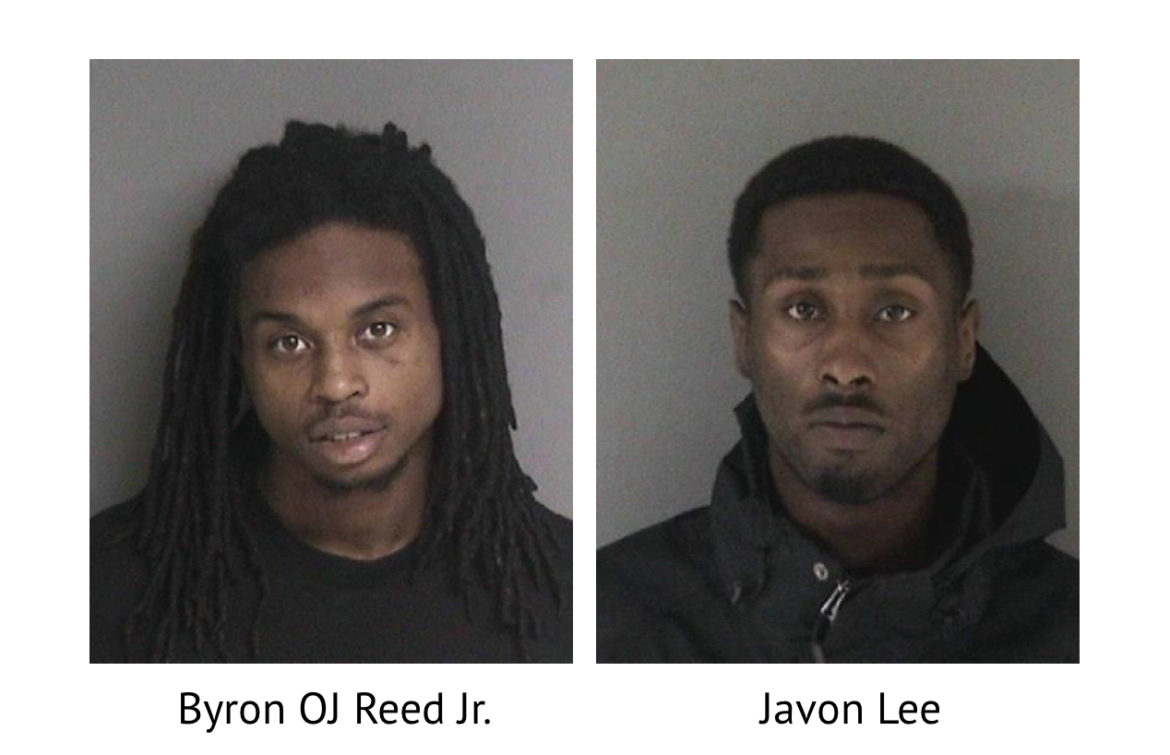 Two convicted robbers were arraigned Friday on charges stemming from their roles in the death of a man who died from injuries he suffered while he was trying to get back his laptop computer, which was stolen last Jan. 31 while he worked in a coffee shop in Oakland.

Byron OJ Reed Jr. 22, of San Francisco, and 21-year-old Javon Lee, in yellow jail uniforms, appeared in court as Alameda County Superior Court Judge Barbara Dickinson read the charges against them. However, as deputies escorted Reed out of court he shouted, “I love you!” to his sister Shaquila Reed, 30, of Oakland, who attended the brief hearing with another female family member.

After Dickinson said that Byron Reed would be held in custody without bail, which is standard practice when defendants are first charged with murder, Shaquila Reed shouted, “Why no bail?” but the deputies who were guarding the courtroom didn’t take any action against her.

After Shaquila Reed left the courthouse she got into a confrontation with two of Lee’s family members. They apparently were upset that Reed had told reporters before the hearing that she thinks her brother is innocent because he was babysitting her child at her home in East Oakland at the time of the laptop robbery and he is hanging around “with the wrong kind of people.” Four deputies had to separate Reed and Lee’s family members.

Reed is charged with murder and the special circumstance of committing a murder during a robbery for the incident in the 2000 block of Mountain Boulevard shortly after 11:30 a.m. last Tuesday that ultimately claimed the life of 34-year-old Shuo Zeng.

Zeng was taken to a local hospital to be treated for his injuries but died there a short time later, according to police.

Surveillance video shows two individuals snatching a laptop from Zeng and then fleeing into a waiting vehicle, Oakland police Officer Gerald Moriarty wrote in a probable cause statement. Zeng chased the suspects to their getaway vehicle, which authorities believe Reed was driving, and a struggle ensued but he was struck by the vehicle and ultimately succumbed to his injuries, according to Moriarty.

According to Zeng’s Linkedin profile, he was a native of China, graduated with a degree in physics from Sichuan University and got a doctorate at Kansas State University. Zeng’s profile indicated that he moved to the Bay Area in 2015 to work for Aspera, an IBM company in Emeryville, as a research scientist and engineer.

Shaquila Reed told reporters before the hearing that her brother couldn’t have been involved in the crime because “he was home with me all day” but later admitted that she left him with her child at one point while she did errands so she can’t account for all of his time. Reed said her brother is “a very loving person” and said killing someone “is one mistake he wouldn’t make.”

Lee, whose bail was set at $255,000, and Byron Reed are scheduled to return to court on Monday to be assigned attorneys and possibly enter pleas.