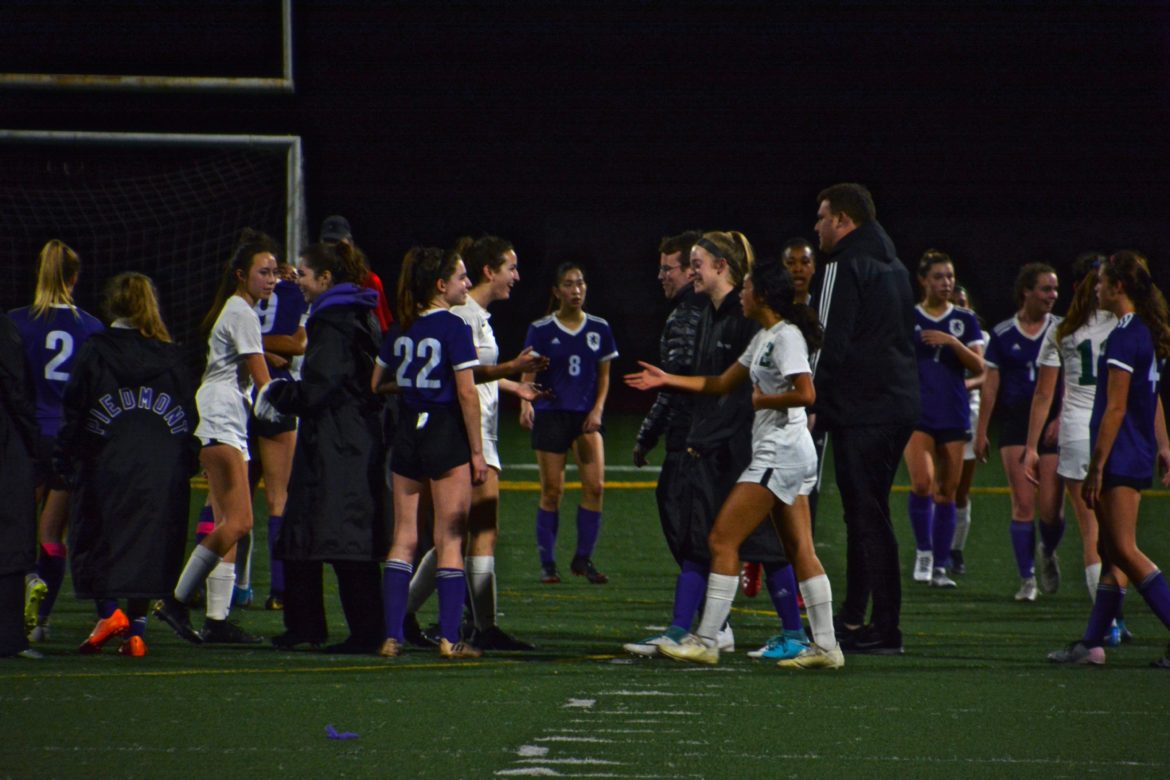 The Highlanders played two more league opponents, resulting in two more draws.  A 3-3 result against Castro Valley on January 24 followed a scoreless match against Berkeley on January 22. Along with the draw at Bishop O’Dowd the week earlier, Piedmont now has played three league matches and tied all three.

The Castro Valley Trojans came to Piedmont with recent losses to both Berkeley and O’Dowd, and for the first half hour of the game, it looked very much like they would go home with another loss. Senior Ceci Brien, returning to action this week after being out with a foot injury since December, started off the scoring for the Highlanders. With her back to the goal about 25 yards out, Brien held off a defender on her back, scanning the field for options. Seeing none, she decided to create one for herself, turning on her defender and quickly firing a line drive left-footed shot into the upper corner of the net.

Seizing the momentum from Brien’s goal, the Highlanders stole the ball following the Trojans kick-off, and senior Peri Ozsoy dribbled up the middle toward the top of the box. As she lined up her shot, she was fouled from behind, setting up a free kick opportunity. Piedmont’s strong-footed center back Nina Goldberg and Ozsoy stood over the ball as the Castro Valley defenders formed their wall. Goldberg ran over the ball as a decoy, and Ozsoy blasted a shot over the wall with such power that the keeper had absolutely no chance to make a save.

Piedmont maintained the 2-0 lead until the closing minutes of the half, when Trojan Myla Ogle took advantage of a defensive miscommunication to make it 2-1 at halftime.

The Highlanders came out with fire to start the second half, putting immediate pressure on the Trojans. Castro Valley had to call upon all parts of the goal frame to keep the ball out of the net in the opening minutes, as Emily Fitzgerald glanced a shot off the crossbar on a feed from Abby Gallagher. Fiona Hunter careened another one off the post, which was cleared for a corner kick.

Fitzgerald then served up a dangerous corner kick into the goal mouth. The Castro Valley goalie could only get her fingertips to deflect the corner kick, and Brien pounced on the loose ball and sent it decisively into the back of the net to put the Highlanders back up by two.

Castro Valley’s Ogle struck again ten minutes later, moving aggressively on a loose ball in Piedmont’s end and finishing clinically. That goal seemed to energize the Trojans, as they came back just one minute later to score the tying goal.

The Highlanders avoided tragedy five minutes later, as the Trojans had another goal off a corner kick called back due to a foul.

In the final 20 minutes of the game, senior Ashley Nelson sustained Piedmont’s energetic efforts from her defensive midfield position, holding off Castro Valley’s offensive attempts and keeping the score 3-3.