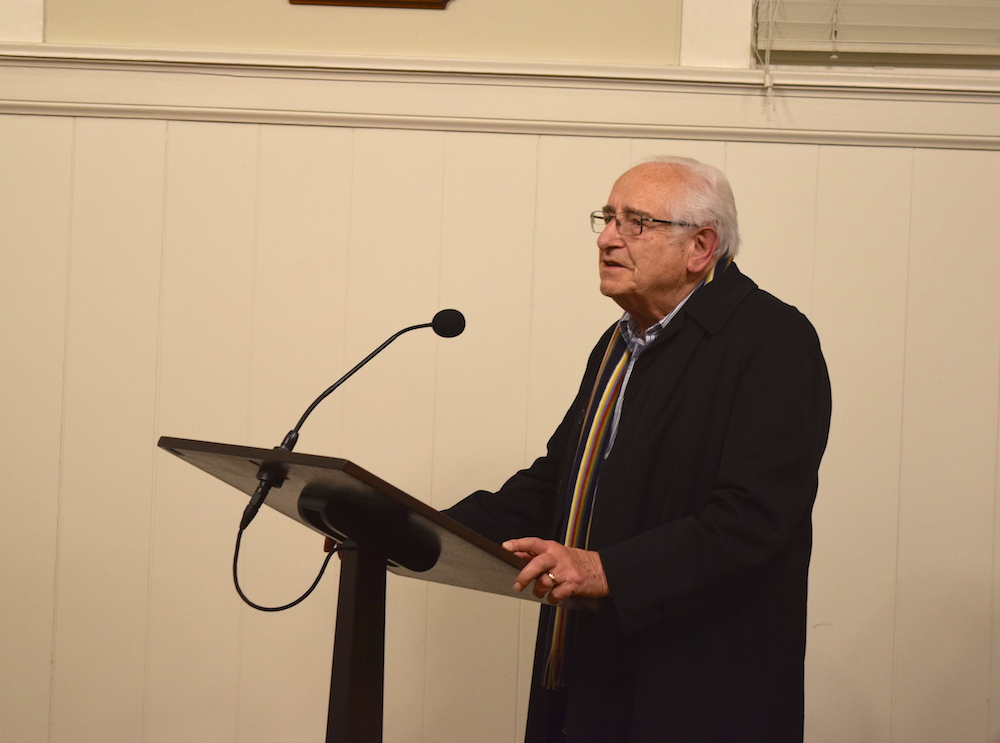 Hellmuth Zieleniewicz, a 45-year resident of Cavendish Lane, thanks the Piedmont City Council for their work to fully restore his street.

PIEDMONT — With the completion of major repairs to Cavendish Lane on Piedmont’s east edge, the long road to restoring a short lane is almost at its end.

Though on paper it may have been a simple official City Council project signoff, Tuesday night’s approval of the Cavendish Lane work as complete was something more profound, almost the end of a nearly three-year ordeal, a complicated project both politically and technically, with the city and contractors moving fast to make sure it happened the right way.

And at the end of the day, it came in at almost 8 percent under budget.

“It’s quite gratifying for us; it took a lot of work, and will have a daily impact on Piedmont residents,” Mayor Robert McBain said about the Cavendish Lane repair work.

The narrow street, which begins at Park Boulevard in Oakland, was fully reopened earlier this month, the temporary steel plates replaced by a fully paved and restored roadway.

Cavendish Lane reaches over Piedmont’s easterly city limit to give four Piedmont households vehicle access to the outside world. That access was interrupted in February 2017 when part of the road fell in; officials from both cities believe  a property owner on nearby Trestle Glen Road (on the Oakland side of the line) performed “unsupported grading work” that caused slide damage undermining Cavendish.

Even though the damage occurred on the Oakland end of the street, it was the four Piedmont households who were feeling the effects. The City of Piedmont spent $54,000 on temporary repairs immediately after the slide damage occurred, and steel plates made the narrow land passable for more than two years, until the final work was recently completed.

The City Council in September awarded a $290,269 contract to Castro Valley-based A-1 Construction to make permanent repairs to Cavendish. That award was made at a special meeting held specifically to award that contract ahead of the winter rains that could have created major delays. The next regular council meeting was two weeks later, and City Administrator Sara Lillevand said that extra time was crucial.

“The two weeks we gained holding that special meeting really made a difference,” she said. “This could have become a decade-long disaster.”

Piedmont is paying, for now, the bill for the major restoration work — approximately $367,000 — because Oakland officials told them this repair work likely wouldn’t be on their city’s to-do list for several years. The end of this journey for the city will be getting reimbursed by Oakland for the work.

Piedmont officials are counting on eventually receiving money from a settlement of a lawsuit filed by Oakland against the Trestle Glen property owner accused of doing the unsupported grading work. Piedmont City Attorney Michelle Kenyon told the council Tuesday night that the lawsuit is still in process.

Plenty of praise was handed out Tuesday night related to the Cavendish Lane work. Council members and city staffers cited A-1 Construction officials Tuesday night for the quality of the work and its cooperative attitude. Public Works Director Chester Nakahara said A-1, which the city had not previously used, was the only company to submit a bid on the project. He also said it’s likely the city will team again with A-1 in the future.

Vice Mayor Teddy Gray King was lauded as the council’s leader in negotiating with Oakland officials to arrange for Piedmont to move ahead with repair work — “That was no small matter,” Lillevand said. King, for her part, said Sally Baack, whom she called “The Mayor of Cavendish Lane,” was key in spurring the work.

Hellmuth and Eva Zieleniewicz, who have called Cavendish Lane home for 45 years, were at Tuesday’s council meeting, as they’ve been at several others where the road repairs were discussed. They walked out of Tuesday’s meeting smiling.

“It feels great that it’s finally completed,” Hellmuth said after the meeting. “It’s good to be back on the road with everyone.