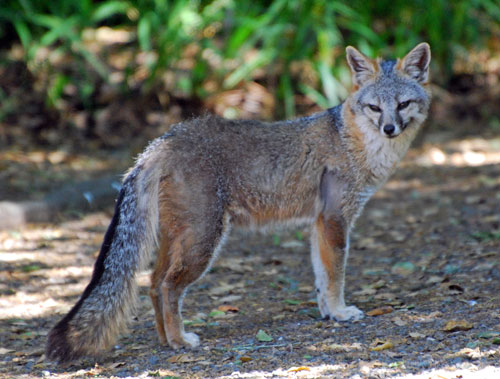 Several foxes in Piedmont are believed to have been infected with a highly contagious and deadly virus known as canine distemper. The causes of this small outbreak are still unknown. Four of the five foxes found had to be euthanized.

The first three sightings were in upper Piedmont (Red Rock Road, Scenic Avenue, and Pala Avenue) beginning on Nov. 26. Two more calls to Animal Control were made in early and late December with sightings on Harvard Road and Glen Alpine Road. Audrey Beil, Piedmont Animal Control Officer, responded to the incidents and found the foxes had symptoms similar to that of rabies.

“We picked up three foxes total that were all displaying the same symptoms,” said Beil.  “They were immobile, seizing, and had nasal discharge. The foxes that we picked up were pretty late in the virus.”

A Piedmont Police Department Facebook post made about the foxes speculated that the foxes could have ingested rat poison due to poisoned animals found in Piedmont in the past. Animal Control advises residents against using rodent poison and relying on more humane methods.

Four of the five foxes found were taken to Berkeley Animal Care Services to be euthanized. The fourth fox found was first euthanized then sent to a health lab for rabies testing. The fifth and last fox found was already dead upon discovery.

“We tested one of them and it came back negative for rabies,” said Beil. “We do believe it was distemper, and not rat poison, that caused the symptoms we saw in these particular foxes.”

According to the American Veterinary Medical Association, canine distemper is a contagious and serious disease caused by a paramyxovirus that attacks the respiratory, gastrointestinal, and nervous systems of puppies and dogs. Canine distemper is spread through the air by direct and indirect contact with an infected animal. Typical symptoms include nasal and ocular discharge, lethargy, vomiting and diarrhea, seizures and paralysis.

Viruses like distemper strike younger animals or old animals that have weakened immune systems. The virus can also be found in wildlife such as foxes, wolves, coyotes, raccoons, skunks, mink, and ferrets and has been reported in lions, tigers, leopards and other wild cats as well as seals.

All of the foxes found in Piedmont were at most a year old or younger. Beil is unsure whether the foxes could have come from the same litter.

“It was very unusual as well that we had it in several foxes in a time period that was so close together,” said Beil. “We have not picked up any more sick foxes recently and are hoping that this wave of illness has passed.”

According to the California Department of Fish and Wildlife (CDFW), there has been a large number of canine distemper virus cases in gray foxes statewide being diagnosed this winter.

“We diagnose distemper cases every year, but every so often we have years where we see a lot of distemper caused mortalities,” said information officer Ken Paglia. “Distemper is by far the most common viral infection we diagnose in carnivores in California and is sadly frequently fatal.”

Paglia said that gray foxes are the most common species the CDFW diagnoses distemper in in California, followed by striped skunks and raccoons. Transmission occurs from contact with infected saliva, urine, feces or respiratory secretions. Factors that might be associated with the increased number of cases could be an increased number of gray foxes on the landscape or a change in the virus that makes it capable of causing more severe illness.

There is currently no cure for canine distemper. In some cases, supplemental treatment, such as fluids through an IV, anti-nausea medication or anti-diarrhea medication, may be provided to alleviate symptoms.

“You want to catch [viruses] really early on,” said Beil. “We have to take into consideration the amount of stress that we’re going to be putting the animal through in order to treat it.”

Beil said that when Piedmont Police and Animal Control responded to the scenes, their main concern at that time was to remove the foxes out of harm’s way to limit exposure from people and pets. Their next concern was to humanely euthanize the foxes to prevent further suffering.

As far as preventative measures go, Beil suggests keeping an eye on pets, checking yards and keeping food and drink bowls inside. Distemper virus and rabies can be transferred from an infected animal drinking out of a bowl and then an uninfected animal drinking out of that same bowl. Dogs and puppies should be vaccinated and kept up to date with DHPP, which prevents distemper, adenovirus [hepatitis], parainfluenza, and parvovirus. Piedmont Animal Control hasn’t received calls from residents about rabid dogs or pets with distemper virus yet.

The best thing residents can do if they see an injured or sick animal is to keep children and pets away and contact the non-emergency number for the Piedmont Police Department at (510) 420-3000. All questions can be directed to Piedmont Animal Control at (510) 420-3006.