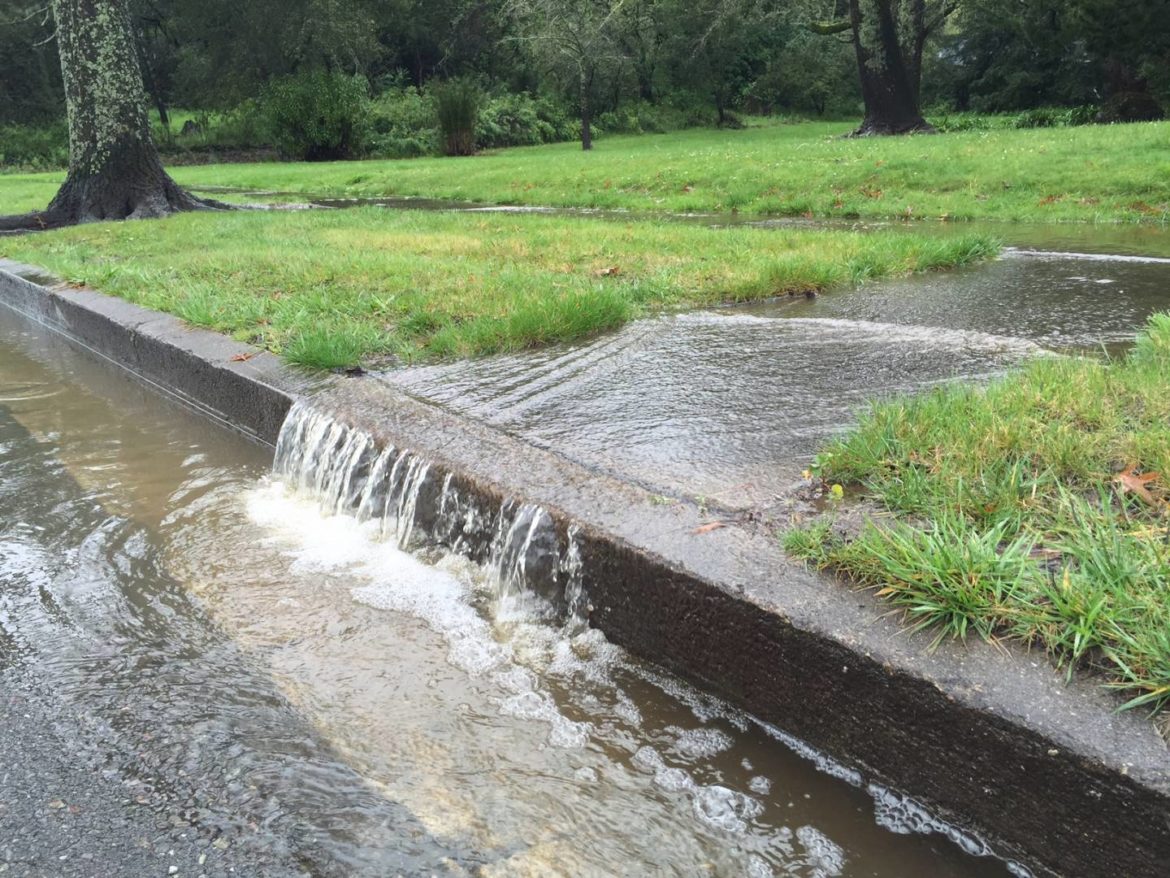 Storm runoff cascades into the street

The City Council on Monday night approved a one-year agreement with planning and design consultants Kimley Horn to provide professional services related to the city’s compliance with the Alameda Countywide Clean Water Program and the Municipal Regional Stormwater Permit regulating stormwater discharges from cities in the Bay Area, including Piedmont.

But before doing so, they heard from several local residents who urged that the city integrate projects on its Bike-Pedestrian Master Plan list onto the Green Infrastructure Program list of projects, of which the stormwater program is a part.

“If you can designate these (bike-pedestrian projects) as green infrastructure projects, I think you’ll enhance their ability to receive funding from other sources,” said Keating, a formal Piedmont councilman.

Councilwoman Jen Cavanaugh agreed that bolstering the relationships between the green infrastructure projects and that bike-pedestrian projects could improve the possibilities of increased outside funding. For example, a traffic control “bulbout” could also collect and help purify storm runoff. But providing irrigation water for a planted intersection bulbout may also cancel out the environmental good a bioswale there would do, so it’s a balancing game.

The main goal of these programs is to limit the amount of pollution draining into San Francisco Bay via area cities’ storm drain systems. Cities including Piedmont do what they can to keep the rain water that flows along curbs and into storm drains as clean as possible. In Piedmont, Public Works Director Chester Nakahara said, that encompasses a series of “trash-capture devices” meant to keep cans, bottles, paper and the like out of the storm drains. More such traps could be installed, he added.

The approved contract will pay the Oakland-based Kimley Horn as much as $83,868. The primary services cover green infrastructure plan support, trash load reduction support (minimizing the trash that ends up in Piedmont’s storm runoff water), annual reports and other “as-needed support services.”

From 2017 until Dec. 18, 2019, when its last contract expired, Nichols Consulting Engineers had done similar consulting work for Piedmont. The cost for the new contract is about the same as the old one, Nakahara said, plus an inflationary bump. The new contract, while for one year, can be extended up to two more times for one additional year each.