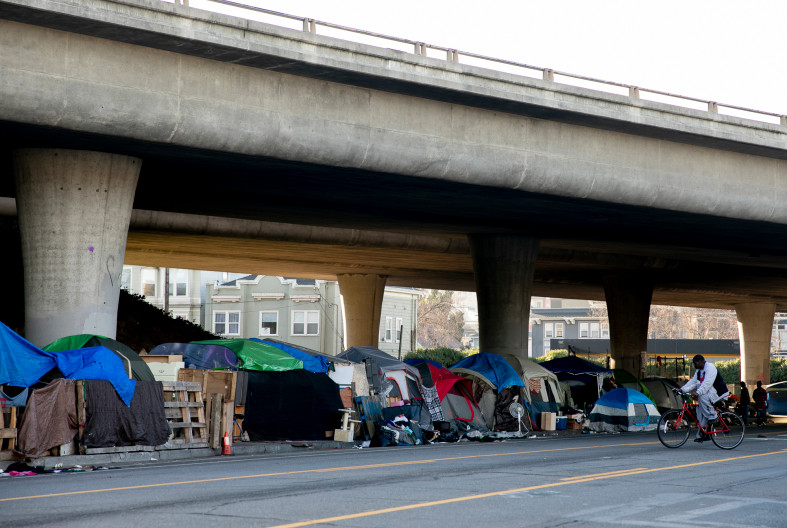 A tent encampment off of Grand Avenue in Oakland. Photo by Anne Wernikoff for CalMatters

The Berkeley City Council on Tuesday night will consider a proposal to develop a homeless camp for up to 120 tents below a bridge on University Avenue that connects Fourth Street and the city’s waterfront.

The proposal by City Councilwoman Kate Harrison, which is supported by Mayor Jesse Arreguin and council members Cheryl Davila and Rigel Robinson, says the proposed emergency outdoor shelter “should be seen only as a temporary fix.” But the proposal says that even though there have been gains in building permanently affordable housing and provide services to lift people out of homelessness, “We are still unable to serve all homeless people in Berkeley simultaneously and there are still gaps in service.”

Harrison and the other three city officials say, “An emergency outdoor shelter with durable tents and sanitation services is a short-term option that is safer and cleaner than the status quo of unsanctioned camping throughout the city.” They say the intention of their proposal is to “create a limited number of sanctioned encampments operated in an organized fashion.”

The proposed location is on land surrounded by light industry manufacturing to the north, south and east and Interstate Highway 80 to the west. Arreguin’s spokesman Stefan Elgstrand said Tuesday afternoon that half of the land is owned by the city and the other half is owned by Caltrans, which leases that section to the city for storage purposes.

Elgstrand said questions have been raised about whether Caltrans property could be used for homeless services but noted that Gov. Gavin Newsom issued an executive order last week directing agencies under his command to identify state land that could be used as temporary shelter locations for the homeless. The proposal asks the city manager to consider amenities in the outdoor shelter such as climate-controlled, wind-resistant durable tents with wooden pallets for support, portable toilets and handwashing stations, shower and sanitation services, garbage pickup and needle disposal and an agency to manage the program, which would be open 24 hours a day.

The four city officials who back the proposal say Berkeley had about 1,100 people experiencing homelessness during the last official count, including 813 who were unsheltered, meaning they sleep in a tent, on a street, a sidewalk or in a park. Harrison and the other city officials propose a 180-day suggested length of stay in the program and indicate the possibility of more than one camp in Berkeley, although only one location is listed in the report.

The City Council meeting is scheduled to begin at 6 p.m. at the Berkeley Unified School District’s board room at 1231 Addison St. in Berkeley.