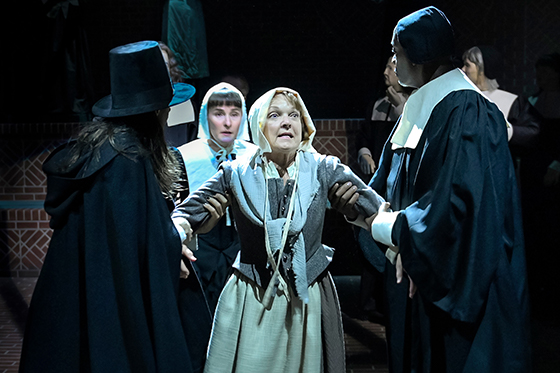 In her sixth outing with Berkeley Rep, Pulitzer-nominated playwright Sarah Ruhl displays a bewitching array of talent in her latest work, Becky Nurse of Salem. Becky is a stern correction to Arthur Miller’s The Crucible, the classic, if grossly inaccurate, play of the Salem witch trials emblazoned on the memories of American theater audiences and most high school students. Although a few subplots in Ruhl’s play hang like loose threads and the ambitious, revisionist work grapples in early scenes to find footing, the two-hour-45-minute production nevertheless offers another example of Ruhl’s striking, whip-smart grasp on contemporary culture, humor, and language.  A top-tier cast makes liberties taken in character development easy to forgive. Fresh, feminist perspective based on real facts provides valuable insight into the public hysteria that led in 1692 to the witch trials and 14 women sacrificed.

Becky has much to say about the 2016 presidential campaign in which Donald Trump caused commotion at rallies by shouting, “Lock her up!”, to which supporters replied, “Hang the bitch,” referencing candidate Hillary Clinton. The “witch hunt” wording, that in 2019 occupies Trump’s Twitter feed and public comments, compelled Ruhl’s return to Miller’s fact-skewing story of John Proctor and his lust for 11-year-old Abigail Williams, a tale that led to accusations of devilry and Rebecca Nurse’s hanging from a tree on Gallows Hill in 1692.

Becky Nurse (Pamela Reed) is a rebellious grandmother and descendant of Rebecca Nurse. Fired from her low-paying job as tour guide at the Salem Museum of Witchcraft, she visits a witch (Ruibo Qian), casts a spell on her ex-boss Shelby (Elissa Beth Stebbins), steals a wax statue from the museum, dives into an affair with bartender and very-married Bob (Adrian Roberts), agonizes and feels responsible for her daughter’s addiction to pain killers and suicide, and is on the skids with Gail (Naian González Norvind), the granddaughter left for Becky to raise. Oh, and there’s Gail’s boyfriend, Stan (Owen Campbell), a goth-like fellow with black eyeliner and nail polish who Becky doesn’t trust.

A flank of wax statues (witches, judges, and John Proctor) fly overhead on broomsticks or are animated by actors who move the deadpan-faced puppets in crossover scenes that have Becky on trial or in jail countered by recreations of Rebecca Nurse on trial. Scenic designer Louisa Thompson’s sparse set and eery lighting by lighting designer Russell H. Champa are effective throughout.

Director Anne Kauffman is magically attuned to Ruhl’s channel. It’s no easy task to weave a seamless journey that passes effectively through centuries to arrive at the play’s remarkable end: a Disney film-like scene with Becky, Bob. and Gail exuberantly stomping on overturned ice cream cones (that resemble witch hats) to celebrate the brokenness of life and shout manifestos of human independence and resistance to oppression. Ruhl suggests in program notes her reasons for writing Becky Nurse may remain unknown or untold, but one thing is clear: Abigail Williams and the other women of Salem are finally freed from historical stigma and Miller’s original Crucible prison.

Becky Nurse of Salem is by Sarah Ruhl and directed by Anne Kauffman. Berkeley Rep/Peet’s Theatre from December 12, 2019 to January 26, 2020. Tickets on sale here.