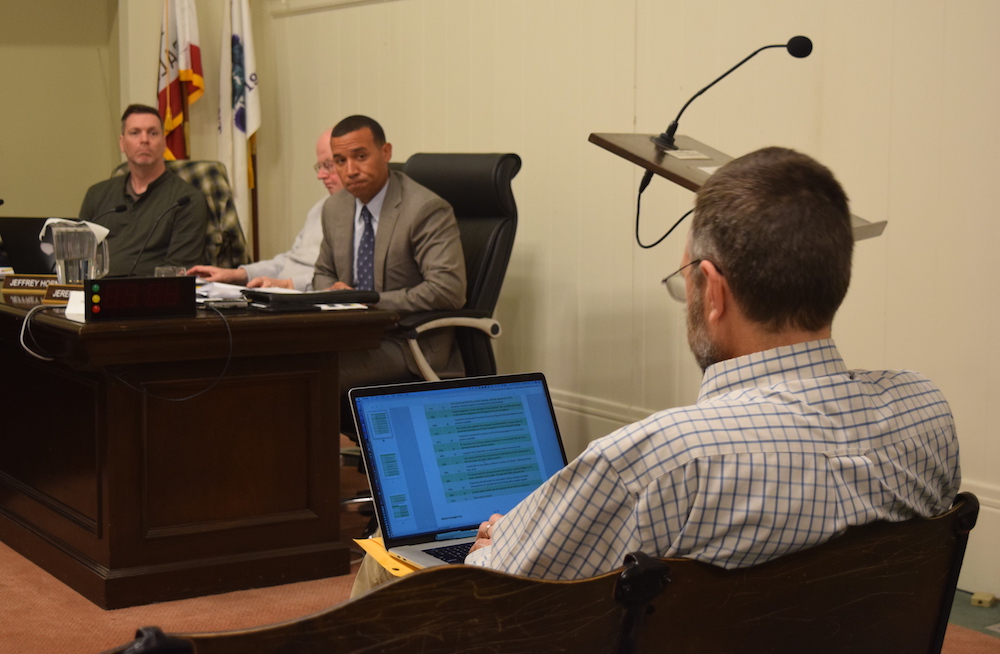 Piedmont Police Chief Jeremy Bowers thanks democracyGPS founder Chris Krenn, who conducted his own survey of how Piedmonters feel about public safety cameras.

This comes as the city contractor is still analyzing results of a survey conducted in late September and through October asking Piedmont residents (and others) their opinions on these public safety cameras, including whether they want them at all. The survey was accessed through the city’s website.

The survey was part of an ongoing public outreach concerning the surveillance cameras. The committee held a special public meeting in March dealing specifically with surveillance cameras, and there have been a series of neighborhood meetings where the cameras were discussed.

While the information gathered from the online survey is still being processed and analyzed, retired Judge Jeffrey Horner — a member of the city’s Public Safety Committee — said the neighborhood meetings yielded pretty clear results.

“The input from the people at these meetings was very positive; there was no negative feedback at all,” Horner said at Thursday night’s Public Safety Committee meeting.

A separate online survey about public safety cameras was conducted by democracyGPS, a website founded by a computational physicist and Piedmont resident Chris Krenn. He told the Public Safety Committee Thursday that 42 people had weighed in on that survey. There was some negative feedback on that platform, Krenn said.

“There is significant concern about facial recognition,” Krenn said.  In addition, there is a group of respondents distrustful of government in general, and of the safety cameras in particular. “There is a set of people against the cameras,” Krenn said.

The city survey and the democracyGPS survey are unrelated efforts, though Bowers thanked Krenn at Thursday’s meeting for his survey work.

Several intersections have been identified as prospective locations for camera installations. If the City Council approves a camera program, the first installations would be at the intersections of Grand and Wildwood Avenues, Grand and Rose Avenues, Sunnyside and Olive Avenues, Trestle Glen Road and Cavanaugh Court, and Kingston and Monte Cresta Avenues. Bowers said those locations could change for a variety of reasons, including cost.

The city has had a trial public safety camera installation — three cameras at Grand and Oakland Avenues at Piedmont’s main southern entrance — since 2012.

Echoing a statement she made in September, Committee Chair Lynne Wright said Thursday that the Public Safety Committee will not make a formal recommendation about the public safety cameras to the City Council in January.