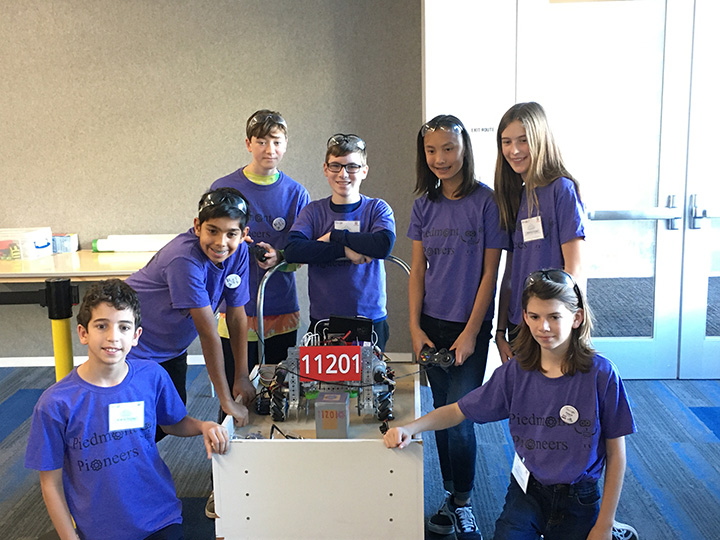 On Dec. 14, the Piedmont Pioneers, a middle school FIRST Tech Challenge (FTC) robotics team, competed in their first tournament of the season at Google Headquarters in Sunnyvale.

FTC teams (up to 15 team members, grades 7-12) are challenged to design, build, program, and operate robots to compete in a head-to-head challenge in an alliance format in each round. The objective of this year’s theme, Skystone, is to attain a higher score than the opposing alliance by picking up 4x4x8 inch blocks called stones, moving them across the field and stacking them into a tower upon a platform called the foundation.

Points are also awarded for performing these tasks autonomously and navigating to specific parts of the playing field. The Pioneers placed 12th overall in the tournament against a field mostly comprised of high school teams after overcoming several obstacles during the course of the day, including problematic wiring connections, losing a stone intake wheel, and having only a minimally operating autonomous code.

Nevertheless, the Pioneers and their alliances won 2 of the 5 qualifying rounds. And, in recognition of all of their hard work off the field, the Pioneers were awarded the Connect Award during the Concluding Ceremonies.

The judges noted: “This team demonstrated impact at many big public events. A student-led digital presence helps spread their message. They are really outreach pioneers.” The Connect award is given to the team that most connects with their local science, technology, engineering and math (STEM) community. A true FIRST team is more than a sum of its parts and recognizes that engaging their local STEM community plays an essential part in their success. The recipient of this award is recognized for helping the community understand FIRST, the FIRST Tech Challenge, and the team itself. The team that wins the Connect Award aggressively seeks and recruits engineers and explores the opportunities available in the world of engineering, science and technology.

This team has a clear team plan and has identified steps to achieve their goals. The team had a lot of fun and returned to Piedmont enthused to tweak their robot, taking into account all of the lessons learned, in preparation for their next tournament on February 1.

In another exciting aspect of the tournament, East Bay Community Energy (EBCE) filmed the Pioneers throughout the day and conducted interviews with team members and parents which will be used to produce a 90 second video highlighting the work of Piedmont Robotics. This video will be the second installment in EBCE’s hyperlocal series and will be posted to the Pioneers’ website.

The Pioneers would like to thank their mentors: Henry Lambert, Levon Barseghyan, and Frank Zhao and their sponsors: Piedmont Makers, East Bay Community Energy, Zenni Optical, Subway (Montclair), E&M Machinery, The Grubb Company (D.J. Grubb and Matt Heafey), and 2 Anonymous donors for all of their support.

The team will be accepting student applications in March through the Piedmont Makers to join for Fall 2020. Interested students and donors can find more information about the Pioneers at https://piedmontpioneers.wixsite.com/mysite