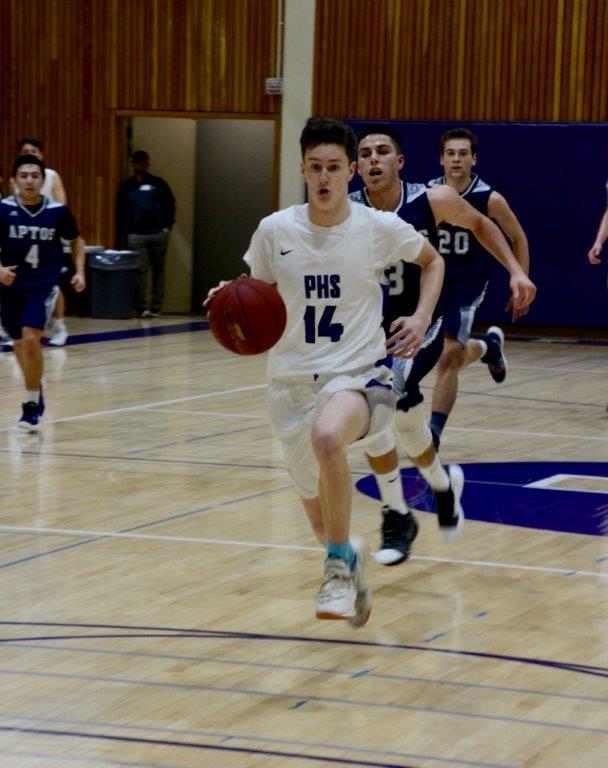 The Highlanders came this close to beating Branson-Ross in the finals of the Piedmont Varsity Tournament on December 7 before falling, 50-47.

Luke Harris got a 3-pointer off in the final seconds for the Highlanders, but the Bulls’ Miles Keefe got a hand on the ball to deflect it short of the basket.

“It was a tough L,” Piedmont coach Ben Spencer said. “We had it. The boys played their hearts out. Great defense the entire game.”

“Branson was a good team and played great D in the second half,” Spencer said. “We had a hard time scoring.”

Harris led Piedmont with 21 points, and Luke Barrett had 11 points, but just three in the second half. No other Highlander scored more than five.

Spencer said Barrett had five blocks in an earlier game. Along with Paul Davies, they are keys to Piedmont’s interior defense.

“We give up a little in terms of girth inside, but we’re kind of sneaky long,” Spencer said. “The best thing about them, they are really smart defenders. The shots they block are from being really intelligent and having a high basketball IQ.”

Head-Royce was able to hang on early, but by the end of the first quarter, the Highlanders led 24-13. They used a 27-9 second quarter to blow open the game. Piedmont handed out 14 assists on the night.

The Highlanders (4-1) next host Tenison Wood from Australia on December 10 at 7 p.m. They then travel to the Rob Vares Tournament at Washington-Fremont high school, beginning December 12. The Highlanders open up with El Camino-South San Francisco.