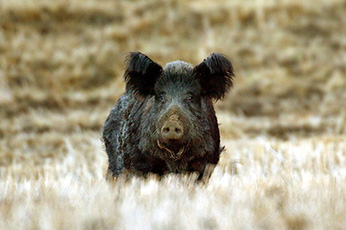 The city of Lafayette has called in a trapper to help ease the city’s problems with wild pigs tearing up sports fields and posing a danger to people and dogs on local hiking trails, city officials said.

The city’s Parks, Trails and Recreation Department is coordinating efforts with the Lafayette Police Department and the California Department of Fish and Wildlife to make sure the pig population is controlled safely. In addition, the city also is closing some nature trails to minimize possible exposure of people and pets to the pigs. The trails will be reopened when it’s deemed the wild pigs no longer pose a notable threat.

The wild pigs, fairly common in Contra Costa County and elsewhere throughout California, are a mixture of European wild boars, hybrids (crossbred domestics) and feral domestics. Though accounts differ, one story is that boars were first introduced into California by George Gordon Moore, who brought them from North Carolina to the Carmel Valley at the San Francisquito Ranch in the 1920s for sport hunting, and spread rapidly from there.

They are the very definition of “invasive,” destroying wildlife habitat and competing with native species for food. That food can be almost anything — nuts, grubs, acorns, seeds, roots, fruit, rodents and small reptiles. Their search for food often involves aggressively tearing up the landscape, turning up soil for grubs, moles, seeds or anything else under the surface that’s edible.

The feral pigs have caused that kind of damage in many parts of the Bay Area, notably in and around Alamo, Diablo, San Ramon, Dublin, Morgan Territory, the Sunol Wilderness and other communities near Mount Diablo. In past years, they also have been reported in San Jose’s East Foothills and in the hills of San Mateo County.

While having poor eyesight, they have keen senses of smell and hearing. And as they can be vicious, people should stay away from them.