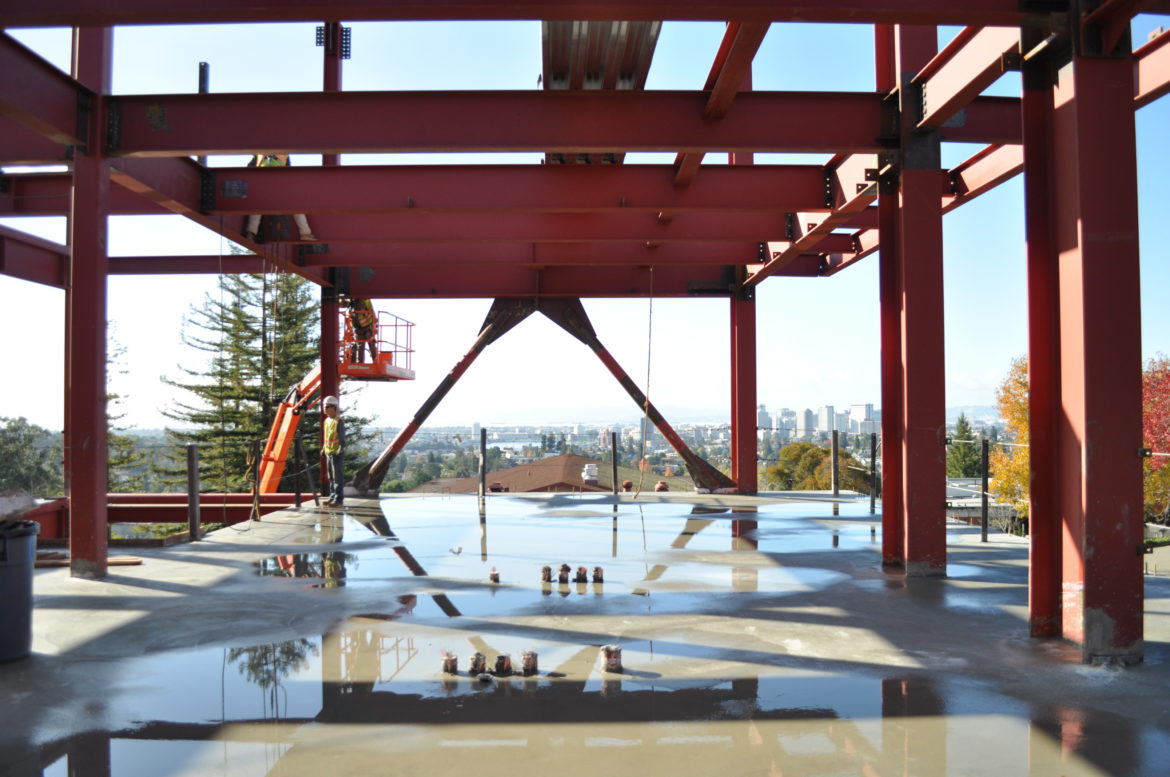 Best view in the city? On the third floor of the STEAM building, Dec. 14

While students are tackling final exams this week, construction crews working on the new STEAM building will be hammering away on the structure three stories above them. Although this part of the project has been noisy, PUSD Director of Facilities Pete Palmer said during a tour of the site on Saturday, Dec. 14 that they’re trying to find a balance between the noise and staying on schedule.

“This is our critical path,” said Palmer. “We’ve got to get the steel and concrete installed so we can start framing the exterior skin.”

Meanwhile, in the basement, crews are working to pour topping slab on top of a hydroponic piping grid with foam insulation underneath, before winter break starts. Palmer calls this “the state of the art part of the building.”

“We loop the hydronic piping through this grid and it’s zoned according to the rooms,” said Palmer. “This is super high tech and probably one of the most efficient ways to heat and cool a building; it’s zero net energy.”

“We’re doing all this work as we’re doing steel, plumbing, and electrical,” said Palmer. “We’re pushing so hard because it is pretty amazing to do a project of this size in this short period of time. I’m just concerned about finishing and opening this building come August. Any little hiccup and we could miss it.”

At the Dec. 11 School Board meeting, H1 Construction Program Coordinator Michael Brady described a building shrink wrap treatment for the STEAM building. Palmer said that the wrapping will weatherproof the project and allow the crew to work through the rainy season.

“We’ll take shrink wrap and wrap the whole thing,” confirmed Palmer. “That enables us to be relatively weather-tight to do all our exterior skin: the DensGlass, the stucco paper, the windows, door frames; everything is getting enveloped.” This work will happen over several days in the next couple of weeks.

So far, the project remains on time and budget, but not without a bump or two along the way. Palmer recalled a pretty large hiccup with the STEAM building’s steel fabrication early in the fall. “We were in panic mode there for a few weeks, because the original steel fabricator wasn’t able to finish fabricating all the steel,” said Palmer. Fortunately, they found a secondary shop to finish fabricating all of the third floor and roof steel without delay.

Budget changes for Alan Harvey Theater will be announced mid-January

At the Dec. 11 meeting, H1 Construction Program Coordinator Michael Brady informed School Board members of changes required for the 20,946 square foot Alan Harvey Theater. The Division of State Architecture approved the permit and final plans, but with conditions/modifications. Those modifications now have to be factored into the budget and timeline. The budget change will be presented to the School Board in January.

“It’s seismic upgrades that the Division of State Architecture is requiring above and beyond what we had in our guaranteed maximum price with Overaa,” said Palmer. “It’s out to pricing now and we should have a good idea soon what the theater is going to cost.” Palmer said they have $850,000 set aside for contingencies.

The new Alan Harvey Theater will be built where the PHS administration building is now and is scheduled to open in fall 2021.