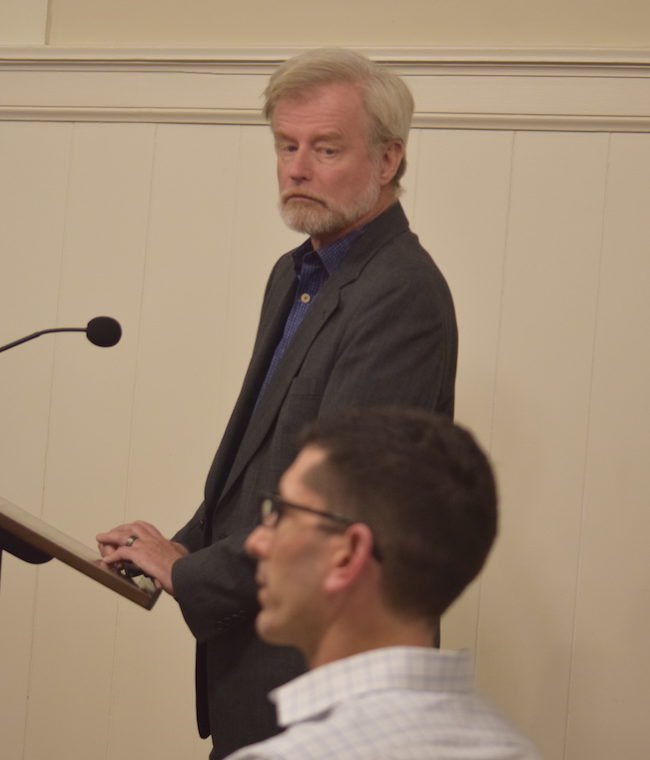 Tom Jakobsen of ClientFirst Technology (standing) and Adam Schwartz of Computer Courage talk with Piedmont City Council members about the city's IT system and a newly approved one-year extension of Computer Courage's contract to provide support.

The City Council on Monday unanimously approved a one-year extension of its contract with an Emeryville-based firm as City Hall continues its long-term technology upgrade — with an increasing emphasis on security.

We’ve come a tremendous way using this IT master plan as a road map for that,” Deputy City Administrator John Tulloch told the council.

Adam Schwartz of Computer Courage told the council that, three years ago, his firm came to Piedmont to find an underfunded, aging and outdated computer system, and that the system has come a long way.

“I think you’re in excellent shape,” Schwartz said of the city’s IT system. “But you can always do more.”

Schwartz and Tom Jakobsen of ClientFirst Technology, a consultant hired by the city, said some of this year’s planned improvements will be new employee workstations, increased capabilities of the city’s new website rolled out in September including online citizen bill paying, and — perhaps most importantly — continuing to upgrade the city’s computer system from outside security threats, including ransomware with which hackers can freeze city data. Some cities, Schwartz said, have paid significant cash ransoms to have their own data decrypted, or kept from being spread publicly.

Schwartz told the council that cities’ IT systems can be especially vulnerable, since a relatively high proportion of material is available to the public, making inroads by bad actors more possible. Email security, Schwartz said, is especially crucial.

Several Piedmont council members said they have ongoing fears this happening to their data, and showed particular interest in talk about beefing up the city’s IT security.

“Security and productivity are two of my top directives,” Schwartz said. And Jakobsen added that, in his opinion, Piedmont has “a model security system.”