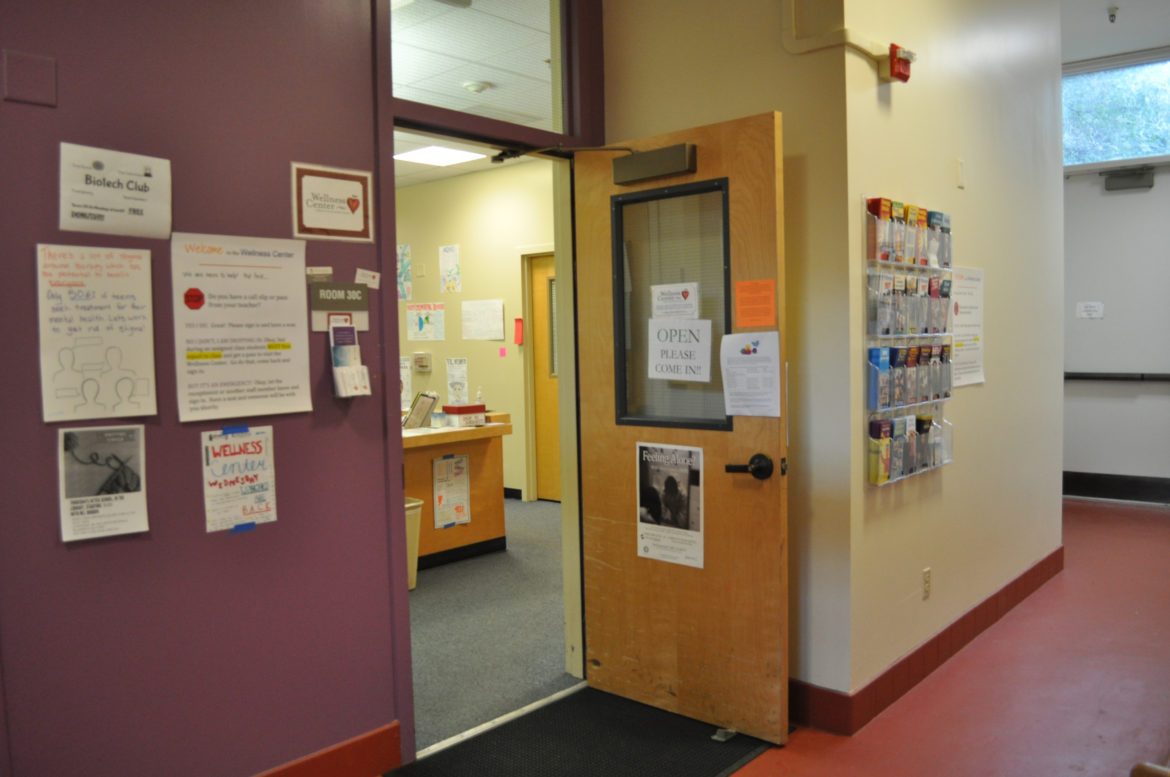 It may take a village to raise a child, but it takes more than that to keep them socially and emotionally healthy as they wend their way through adolescence.

That recognition is one of the driving forces behind Piedmont High School’s Wellness Center. The Center provides resources, treatments, and not least — a quiet place where middle and high school students can go for help in navigating the sometimes bewildering terrain of modern adolescent life.

Set inside PHS’s 30s building next to the library, it is a place that sees lots of activity, especially during final exams season in December. One-third of high school students and one-quarter of middle school students say they have used the Center at least once per year.

Since opening in 2007, the Wellness Center has been a front-line resource for dealing with common psychological maladies like stress, depression, grief, and family and friendship conflicts. It also supports the school district’s overall academic and social mission by working to help students fend off or eliminate anxieties or behaviors that might lead to bigger problems: such as substance abuse, suicidal thoughts, or even self harm. “Every year we have a handful of students going through a major crisis,” said Wellness Center counselor Laurie Misra.

Students may walk in to the Wellness Center if they choose, although they may experience a wait. They can also be referred by school administrators, teachers, and academic counselors. Students not in distress are usually returned to class and given a call slip to return when a therapist becomes available. According to annual reports compiled by clinical supervisor Alisa Crovetti, most students report anxiety or stress as the primary reason for their visit.

A 2017-18 California Healthy Kids Survey (CHKS) revealed alcohol consumption by Piedmont students exceeded the rates of other high schoolers in the county and even many in the state. Forty-six percent of 11th graders reported using alcohol or drugs in the month before the survey, a number 20 percent above the Alameda County rate. Thirty-one percent of Piedmont students reported heavy drinking and 15 percent reported heavy drug use. Among eleventh graders, alcohol use at Piedmont scored second highest in Alameda County. PHS principal Adam Littlefield has previously expressed concern about alcohol use by PHS juniors off-campus.

Even though Piedmont students consistently perform at or near the top of California schools on academic measures, they typically grapple with pressurized social environments that include high demands and high expectations of success. Add to that mix social media, school lockdown drills, and illicit temptations such as vaping and alcohol, and it becomes easier to see why affluent school districts like Palo Alto and Piedmont often report high student stress levels.

“When kids are anxious and depressed, they’re not available cognitively,” says former Wellness Center director Brooke Zimmerman. “So it’s not unusual for grades to decline and kids to try to numb those feelings in other ways. It’s important that we teach students how to take care of themselves in a different way.”

The goal isn’t for students to establish a long-term relationship with the Wellness Center therapists, but to work on addressing their issues in a timely manner. “There is a ten-session limit using solutions-focused therapy, rather than long-term [therapy],” said counselor Laurie Misra.

Depending on the level of crisis, a team of therapist interns, a clinical supervisor, district nurses, and an administrator may be assigned to help the student in need. The police may be also called for support and to meet with the team. Parents are then usually contacted.

“There’s a determination or a health risk assessment that’s done by counselors, police, maybe [the] fire [department] depending on the issue,” said PHS superintendent Randall Booker. “There’s a lot of conversation about what needs to happen, then there’s all the follow-up. It’s a tremendous amount of person power and resources.”

The follow-up includes determining whether the student will be released to their parents or taken to a hospital, which school staff will accompany the student to the hospital, family debriefing, a re-entry plan for the student, and how the community can support the family during times of need.

We’ve been remarkably fortunate that [suicides] occurrence have been extremely rare,” said Booker. “We’ve been so fortunate to not have to experience a student suicide in a very, very long time.”

Administrators have zeroed in on student tobacco use and vaping as one of their primary concerns. CHKS results showed that 24 percent of 12th graders and 23 percent of 11th graders vape. 10th graders followed closely at 17 percent use. Vaping has come under fire after recent studies linked vaping to chronic lung illnesses.

This school year the Wellness Center began working with the Piedmont Police Department’s new juvenile officer, Nicole Casalnuovo, whose position is funded by the California Department of Justice’s tobacco grant program. Part of the tobacco grant goes towards funding a health educator and a part-time mental health therapist to partner with Casalnuovo to create a tobacco diversion program. Both positions will be filled at the beginning of the second school semester.

When Booker came to the district as PHS assistant principal in 2005, he noticed “a tremendous amount of alcohol use” by students. In 2006 he started a conversation around wellness with then-PHS parent club president Anne-Marie Lamarche, then-superintendent Connie Hubbard, and then-assistant superintendent Michael Brady. Booker, Lamarche and former Wellness Center counselor Karen Blanpied (who was at the time the social psychology teacher at PHS), visited Berkeley High School’s Health Center, which is run by the city of Berkeley. Booker recognized quickly that Berkeley’s model — which offered medical screening, diagnosis, and treatment — was bigger than the Piedmont team’s scope.

When the Wellness Center opened its doors, director of student services Brooke Zimmerman stepped in as its first director. Zimmerman recalled being given the opportunity by Booker, who was by then PHS principal, and former superintendent Connie Hubbard. Zimmerman received support from a group of Piedmont parents, along with a $10,000 grant from Kaiser Permanente, funding from Assembly Bill 3632, and other community donations.

The 2019-20 school year saw cuts to the budget supporting the Wellness Center. Intern stipends were eliminated entirely, and reductions were made to intern training, nursing supplies, office supplies, and healthy snacks for students.

The Wellness Center has a support committee composed of local parents that organizes events for the community every year. Their goal is to fill financial needs and raise funds to sustain the Center’s programs.

The Wellness Center tracks its success by looking at whether students are meeting their personal goals, as well as school-wide graduation rates, matriculation data, attendance data, participation in a variety of activities, and students’ general connectedness to the schools.