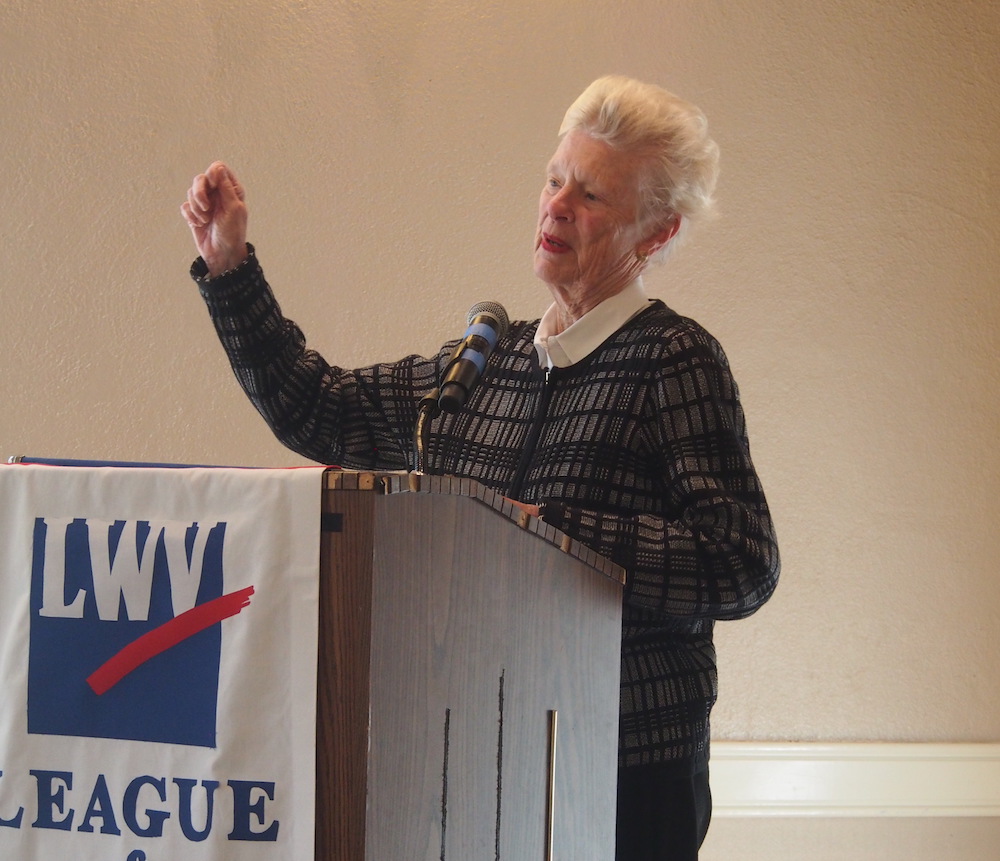 From the days of the “Fairness Doctrine” in broadcasting during the administration of President John F. Kennedy to current legal actions against opioid abuse and the dangers of vaping, Louise Renne has had a long involvement as a public lawyer using the legal system to address social  issues.

The former San Francisco supervisor and City Attorney, in a Dec. 6 talk to the Piedmont chapter of the League of Women Voters, cited experiences in her long career to illustrate the role of the public lawyer in bringing about change. “Whether at the state or federal level, there clearly are opportunities — for good or bad — for an attorney to do the kind of work that the federal state agency has been involved in,” Renne said at the LWV holiday luncheon at the Community Hall.

As the elected city attorney of the City and County of San Francisco from 1986 through 2001, she initiated legal action against six tobacco companies over marketing practices for ads targeted kids.

“We filed to stop Joe Camel,” she said of the class action. “We were actually successful with that.”

The resulting $500 million settlement in the mid-1990s was divided among states that participated in the action, with half of the proceeds going to cities and counties.

She noted that while many jurisdictions used the funds to balance their budgets, she suggested to Mayor Willie Brown that settlement funds could be used for needs at Laguna Honda Hospital, which was under threat of state closure. “He said ‘Renne, you’re on.’”

After leaving the public sector, Renne helped found the Renne Public Law Group, which carries on the same kind of focus she brought to the city attorney’s office, fighting many of the same battles under similar circumstances.

Where her city office challenged Big Tobacco decades ago, the legal firm is taking on the deceptive practices of e-cigarettes and opioid manufacturers. “Manufacturers told the FDA and doctors that use of opioids would not be addictive, which was not true at all,” she said. Similar lawsuits have been filed nationwide and 3,000 cases have been consolidated in the District court in Cleveland. “I’ve heard about some settlements and there will be more and more in the next few months,” she said, adding that unlike the tobacco settlement, money must be used directly to help solve addiction.

“I think I’ve been very lucky in my career because I’ve been fortunate enough to be involved in the public realm,” she said. “Little did I know this was where it was going to be.”

Renne, a native of Pittsburgh, said her initial thoughts after graduating from Columbia Law School in 1961 were directed toward business law — “But it turned out the business schools I was looking at didn’t accept women,” she said. Renne and her husband Paul instead got their early professional experience in the Justice Department under the new administration of Kennedy. He went to the Civil Rights division, while she was in the legal department of the Federal Communications Commission at the time the Fairness Doctrine was enacted.

The doctrine, known as equal time, was introduced because many TV and radio stations in Southern states “were used as outlets for the Ku Klux Klan,” she said. The FCC mandated that broadcast outlets must air opinions from both sides of a contentious issue. Renne lamented that the policy has since been repealed, saying, “Speaking for myself, I think today we might have more civilized dialog on the issues if we had the Fairness Doctrine.”

Renne went on to become a California deputy attorney general in the environmental and criminal divisions from 1966-77. Her tenure there under Attorney General Evelle Younger included brokering a settlement with logging interests that ended clear-cutting of timber outside Redwood National Park.

Renne was thrust into the political side of government following the tragic 1978 assassinations of San Francisco Mayor George Moscone and Supervisor Harvey Milk. Renne was selected to fill out the term of Dianne Feinstein, who had been named to serve out Moscone’s term as mayor.
Renne served two terms on the board before Feinstein named her city attorney in 1986.

“I found out you learn a lot more as an attorney for a city agency than you do sitting on the Board of Supervisors,” she said.

San Francisco is unique in California as both a city and county, meaning the city attorney’s duties include both. The office “literally represents departments A to Z, the airport to the zoo,” as well as properties outside the city limits such as the airport and Hetch Hetchy reservoir, Renne said.

Her duties sometimes included defending policies she didn’t support. She cited legal action over the hiring practices of the police and fire departments that excluded persons of color and women. She said she defended the departments, but also enacted guidelines that clearly set out steps for hiring.

Her office took on another discrimination issue over the admittance policy of the private Olympic Club, which excluded women and people of color. Renne pointed out that three holes of the club’s golf course are on public land.

“I said you have a choice,” either change the policy or have a course with 15 holes.

Renne took on the discriminatory admittance policy of the private Olympic Club which had three golf holes located on public land.

The policy was changed, but Renne said her husband was shunned by some members of the club. On the other hand, “I got calls from fathers who were so happy that their daughters could now be admitted to the Olympic Club,” she recalled.

Renne noted that next year is the centennial of women gaining the right to vote and said the struggle continues today. “Being able to vote, as a practical matter, is a huge issue in the United States,” she said, and faces threats from gerrymandering and other exclusionary practices.

Renne’s 45-minute talk, delivered without notes or prompts, left listeners awed by her long list of accomplishments and important work. “Louise is inspirational,” said Piedmont School Board member Andrea Swenson, who was in the audience, “She was by far the sharpest and most compelling speaker I’ve heard all year — and I’ve seen a whole host of famous, household names give speeches lately. None held a candle to this woman. Really fantastic.”

One thought on “Attorney Louise Renne, then and now, takes on big issues of the day”