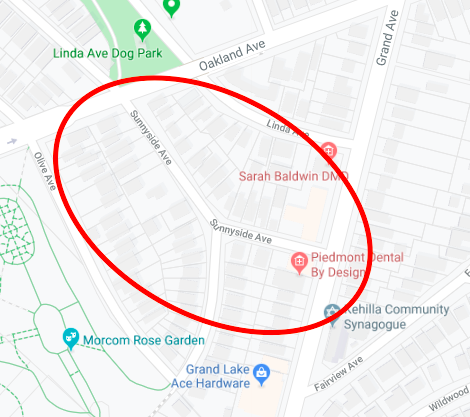 On Tuesday, Dec. 3 at around 8:25 p.m. an armed robbery occurred in front of a residence on Sunnyside Avenue. Piedmont Police Department responded to the call made shortly after by the female adult victim.

She told officers that an unknown male suspect had run up to her with a black handgun and demanded her purse. The victim dropped her purse out of fear for her life. The suspect then took the purse and ran southbound on Sunnyside Avenue towards what was described as a white boxy SUV. The vehicle left towards the direction of Grand Avenue.

There were no reported injuries. The loss was a purse containing several bank cards, identification cards, a silver iPhone, house keys, and $60 in cash.

According to Piedmont Police Capt. Chris Monahan, PPD has information that may lead to one of the suspects and are making progress on identifying the suspect vehicle and possibly one to two occupants of the vehicle. Oakland Police Department was notified of the incident. The investigation is currently active.