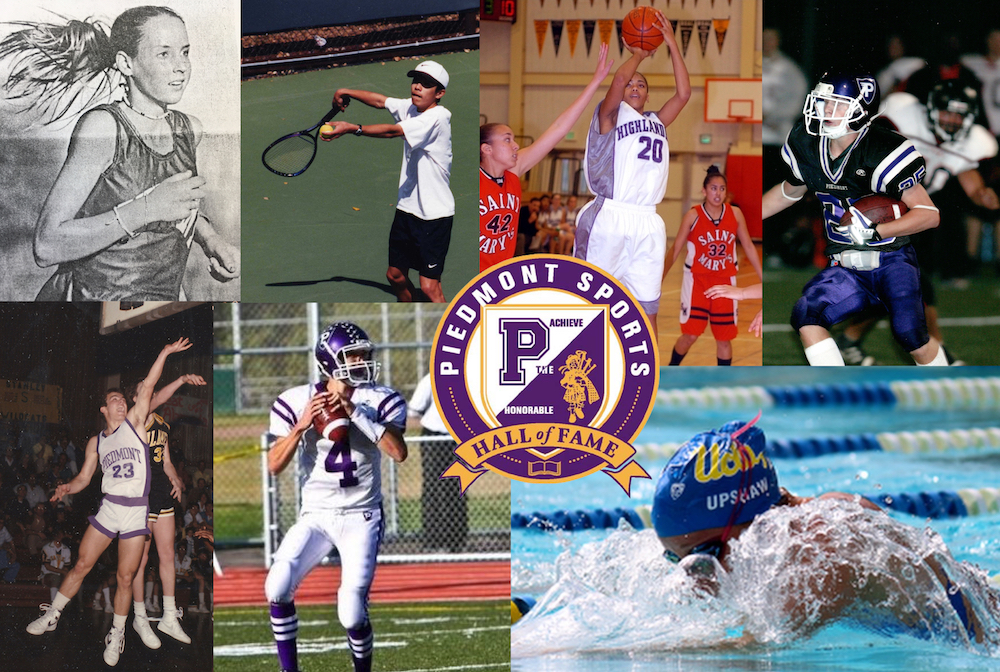 Families, boosters and the general public are invited to purchase tickets and join the celebration to be held at the Claremont Country Club. Purchase tickets HERE.

The bi-annual Induction Ceremony to celebrate honorees and is being held at the historic Claremont Country Club in Oakland on February 8, 2020 at 6:00 PM. The event is open to families, boosters and the general public as ticket availability permits. Please click the button below to purchase tickets for this wonderful celebration of Piedmont Athletics.

George, a 2009 PHS graduate, earned varsity letters in Football, Soccer and Baseball. He was named to the “2009 Top 100 High School Athletes” list by the East Bay Times. In Football George was selected twice to the 1st team BSAL All-League team (junior and senior years). He was the team captain both in his junior and senior years as well as the team MVP his senior year. George was a four (4) year varsity member in soccer. He was a two (2) time 1st team All-League; two (2) time team captain; and two (2) time team MVP in both his junior and senior years. He helped lead his team to the NCS finals three times (2007-2009). In baseball George earned honors at a 2nd Team All-League and team defensive MVP. He helped the team become NCS Champions in 2008. George went on to UC San Diego where he captained the club soccer team to the Open Division National Championship in 2011. He graduated with in Management Science with a Minor in Business. George currently lives in New York City where he works for a data software startup running the Client Development team.

Gibson, a 1998 PHS graduate, earned three (3) varsity letters in Cross Country, two (2) varsity letters in Track, and one (1) varsity letter in water polo. She began cross country as a sophomore where she led the team to a third place in the NCS finals and placed 25th in the state. In her junior year, Heather led the cross-country team and dominated the ACCAL Cross Country league by winning every league race where she competed. She set a new course record in the league finals at the Joaquin Miller cross country course shattering the old record by almost 30 seconds; a record that stood for many years. Her course record helped the team win the league title that year. Gibson continued her winning ways at the NCS finals, winning the championship by 30 seconds. At state, she placed 6th with a time of 19:38, leading the PHS women’s team to 6th place at State. Gibson was a three (3) time All-League recipient from 1995-1997 and additionally was selected to the 1996 All-NCS team. Heather ran the 3200 in track at PHS, qualifying for the Meet of Champions in the springs of 1997 and ’98. She earned an athletic scholarship to attend U.C. Davis. At U.C. Davis Gibson continued to excel in Cross Country and track, becoming a four (4) time All American, twice in cross country and twice in track. At UC Davis, Heather helped the Aggies win the cross country CCAA championship and qualify for the DII NCAA national championships all four years. In 2000, Heather was a big part of UCD’s 3rd place overall D II national finish, placing 20th (2nd on her team) and earning her first All American honors. UCD again placed 3rd nationally in 2001, with Heather placing 3rd on her team and 25th overall. She was voted MVP of the cross-country team in 2000 and 2001. In track, Gibson qualified in the 5k for the NCAA DII National Championships in 2000. She dominated the CCAA in the steeple chase and 5k in 2001 and 2002. At the CCAA championship meet in 2002, she won both the steeple chase (setting a new record in the event) and the 5K. She placed 3rd nationally in 2001 and 2nd in 2002, earning All-American honors both years. In addition to being chosen MVP of the women’s track team those years, she was also voted “most inspirational” by her teammates in 2002. She furthered her education at the Santa Clara University School of Law, graduating in 2005. She qualified for and competed in the 2004 US Olympic trials in the steeplechase. After law school, she focused on the 10K. She placed 9th at the USATF championships in Indianapolis in 2006, qualifying as an alternate for the US Team for the Pan American games. In 2008, she focused on the Olympic Trials. In the spring of 2008, she ran an “A” time putting her in the top 22 female 10K runners in the country and qualifying her for the 2008 US Olympic trials. Gibson started her own law firm in Santa Clara, focusing on fighting health insurance companies who do not pay their members’ medical bills even when they should be covered under the applicable policies. Gibson is married to Jon Burke with two children: a son, Thomas, age 6 and a new baby daughter, Jaye, age 3 weeks old.

Lee, a 1999 PHS graduate, earned four (4) varsity letters in tennis. During that time, he helped lead the team to three ACCAL championships, one ACCAL team runner-up, and to the 1998 Northern California CIF finals. He is a 1-time ACCAL singles champion, 1-time ACCAL doubles champion, and 2-time ACCAL singles runner up to his older brother Garrett Lee. He concluded his high school tennis career with an undefeated season in 1999. After high school, Greg attended UC Davis where he played #2 singles and #2 doubles his freshman year and #1 singles and #1 doubles his remaining three years. In his collegiate tennis career, he was a 4-time All-American. During the summer after his junior year, Greg earned a professional ranking on the ATP Tour. In 2003, he received the distinction of being named UC Davis Male Athlete of the Year among all UC Davis varsity sports, receiving the prestigious Babe Slater Award. He was also the recipient of a NCAA Postgraduate Scholarship, which is given to the top 16 male student-athletes among all divisions in the sport in the nation. In 2011 he was inducted into the UC Davis Athletics Hall of Fame. He also served as the assistant tennis coach for one year at UC Davis and for two years at UC San Diego. Greg went on to obtain his master’s degree in computer science from UC San Diego in 2006. He has been working full-time at the Lawrence Livermore National Laboratory (LLNL) since 2006, where he is devoted to helping scientists make sure their simulations run correctly and efficiently on LLNL’s supercomputers. Greg currently resides in Pleasanton, California. In 2008 he married his wife Nancy whom he met at UC Davis, where she competed on the UC Davis Women’s Tennis Team. In 2015, Greg and Nancy welcomed their son Andrew into the world.

McGrath, a 1988 PHS graduate, earned three (3) varsity letters in football and baseball and four (4) varsity letters in basketball. In football Matt earned awards as a 1st Team All-League Wide Receiver; 1st Team All-League Free Safety; Oakland Tribune Prep of the Week; Team MVP; and East Shore Athletic League Player of the Year. During his time on the team they made the NCS playoffs and ended a 10 year losing streak to Miramonte. In basketball, McGrath was selected as the team MVP. He was selected as a team captain his senior year to the football, basketball and baseball teams. In addition to athletics, Matt was selected as the senior class president, 1988 Male citizen of the year and senior athlete of the year. McGrath continued to Princeton where he played two years for Princeton Football and continues to be an avid coach and advocate for youth sports.

Newland, a 2007 PHS graduate, earned three varsity letters in football and three varsity letters in lacrosse. On the football team he earned three (3) BSAL 1st team All-League honors and a two (2) time team Defensive MVP. In his senior year he was selected team captain and was awarded BSAL Player of the Year. In lacrosse, Newland was a two (2) time team captain and selected DVAL 1st team All-League as a junior and senior. Brendan continued his athletic carrier at Trinity College in Hartford, CT, where he was a four-year letterman and a captain his Senior Year. He finished his career with 15 goals, 5 assists and 105 ground balls and named to the NESCAC All-Academic team his Junior and Senior Year; Brendan graduated with Honors in 2011 with a Double-Major in Economics and Political Theory. Upon Graduation, Brendan returned to the Bay Area and married his high-school sweetheart, Brooke.  The two of them currently live in San Francisco. Brendan works as a Property Insurance Broker and Vice President at Ryan Specialty Group.

Nunes, a 2006 PHS graduate, earned four (4) varsity letters in basketball. She was a member of the 2005 CIF State Championship team. In her senior season Chazny received the following honors: CIF All-State Team; All-Metro Team; All-Bay Area Team; BSAL Player of the Year; BSAL All-League first team. In her junior and senior years, the team won the North Coast Championship. Nunes earned a full scholarship to the University of Missouri, Kansas City (2006-10). She was the 2009 Summit League Player of the Year and is UMKC’s all-time leading scorer with 1,806 points. Morris was a first-team All-Summit League selection in both 2009 and 2010, while earning second-team honors in 2008. She ranks second in field goals made; three-pointers made (231); free throws made (357) and scoring average (15.3). She is sixth in rebounding (633), three-point field goal percentage (.373) and steals (185), while sitting fourth in blocks (118) and seventh in free throw percentage (.778). Nunes was enshrined into the UMKC Athletics Hall of Fame in December 2016. She played overseas in Reykjavik, Iceland for 4 months, averaging 19 points, 6 rebounds and 2 steals before injuring her knee and ending her professional basketball career. Nunes received her bachelor’s in communications in 2010 and her master’s in Public Administration in 2013 from University of Missouri, Kansas City. In 2017, Chazny married her best friend, Stephen Nunes and in February 2019 welcomed Zayden Anthony Nunes to the world.

Upshaw, a 2012 graduate, earned four PHS varsity letters in swimming and one varsity letter in water polo. She set BSAL records at the league swimming championships each year in the 100 Backstroke and the 200 Individual Medley. She also competed in these events at the NCS championships all four years, placing 3rd in the 100 backstroke her junior year and 2nd in the 200 Individual Medley her senior year. Upshaw was a three (3) time All-American in the 100 backstroke and 200 Individual Medley as a sophomore, junior, and senior. During her senior year, Arlyn qualified for the 2012 U.S. Olympic Trials, competing in the 200 Individual Medley. After graduating from PHS, Upshaw attended and competed for the UCLA varsity swim team, serving as a team captain during her senior year. She received top honors as UCLA’s Female Scholar-Athlete of the Year, awarded to the graduating female student-athlete with the highest cumulative GPA. In 2016, Arlyn qualified for and competed in the U.S. Olympic Trials for the second time. Arlyn currently attends the University of Michigan Law School, from which she will graduate in May 2020.

The PSHOF accepts nominations on a year-round basis for this biennial induction ceremony. Nomination guidelines:

All photos provided by PSHOF