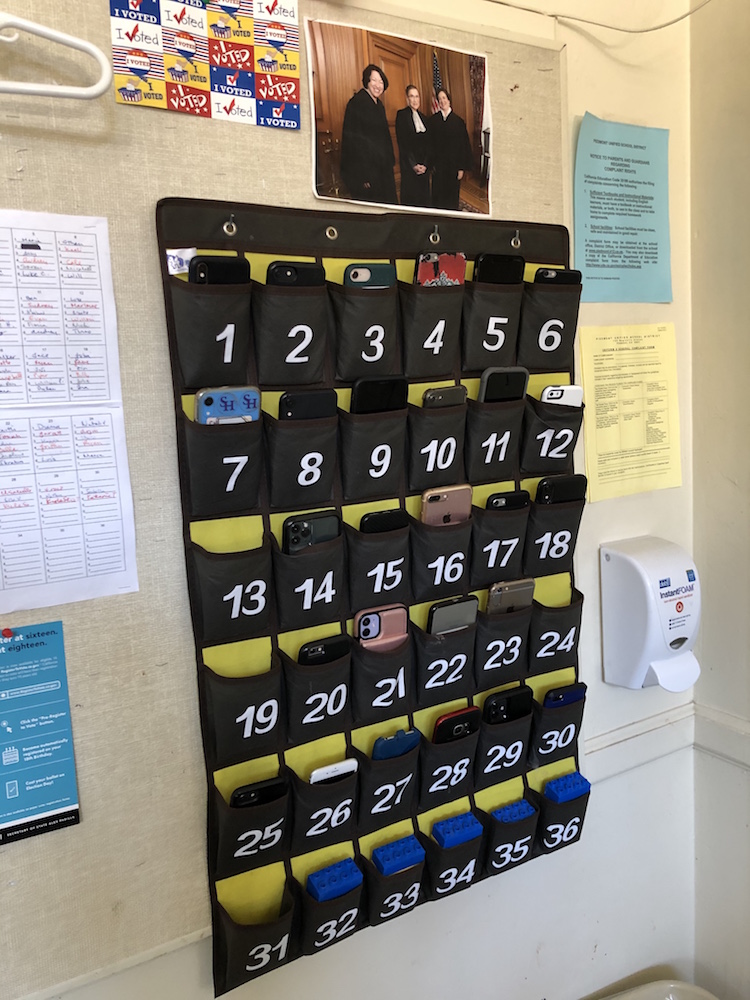 In response to the proliferation of smart phones and watches and the accompanying distraction they pose for students, teachers at Piedmont High School (PHS) and Millennium High School (MHS) are repurposing hanging shoe pouches as “phone hotels” — temporary holders for cell phones or smartwatches during class time.

“It’s become the new normal that students arrive in class and drop off their phones,” stated PHS English teacher and tech/learning coach Debbi Hill in an email.

Smartphones provide a host of distractions, and users can typically receive hundreds of notifications a day, depending on how many apps they have on their phone. According to the Business of Apps, a site that provides news, analysis and data for and about the app industry, the average smartphone user in the U.S. receives 46 app push notifications per day.

The makeshift “phone hotels” are a way to help curb those distractions during class when students need to be focused on learning. “They’re about classroom management and students not having access to their phone at designated times,” said MHS principal Shannon Fierro. PHS technology coordinator Jana Branisa pointed out that students texting and Snapchatting during the last school year was incessant and distracting to her. She also found out that some students had coordinated bathroom breaks together, which she said caused a lot of disruption. She has found the phone hotels to be very helpful.

PHS and MHS have clearly stated technology norms that students are expected to comply with during class. “Not allowed in class: Cell phones and smartwatches (phones must be OFF and in wall pockets,” aka ‘phone hotels’ reads the Student Handbook. While there are classes, like Yearbook, that expect students to use phones on a regular basis, these are the exception to the rule.

“I think that the clearer and the more regulated the policy around cell phone use in the classroom, the higher level of student participation and engagement,” said Fierro. “[Phones are] a major distraction; it’s really hard for any person to resist the temptation of a pocket computer that could show them exactly what they love. To compete with that as a teacher is very challenging.” Fierro noted that using phone hotels increases the burden on teachers as an additional responsibility to manage cell phones.

“It’s a hassle reminding the students at the start of every class to put their phones in them, and it’s a hassle for the students to remember to do it, but the alternative is untenable,” said PHS math teacher Michael Malione in an email. “During classroom time and especially tests, there’s just too much opportunity for inappropriate distraction when the students have access to the phones.”

PHS junior Sophie Eng, co-president of student organization Mindhood Club, first saw phone hotels during her freshman year at PHS. “When I have my phone with me and not in the phone holder, I do use it in class sometimes and I’m definitely more tempted to,” said Eng.

Eng believes that it’s really important to start establishing good habits with phones before college, where students won’t be required to turn in their phones during class, but where the stakes are much higher and the need for focus becomes more important.

Fierro credited the LookUP Challenge recently conducted by Susan Reynolds and Sophie Eng’s Mindhood Club for doing a better job at educating and supporting students around reflecting on their social media and technology use.

Still, not all students are fans of the pouches. PHS senior Max Monical shared his thoughts about phone hotels in an Oct. 15 opinion piece titled “The pitfall of the phone holders” in The Piedmont Highlander, the student news publication at PHS. Monical stated that “the mandatory school-wide phone ‘hotels’ cause more disruption than they prevent” whenever a phone in the hotel rings during class. In Monical’s experience, “phones cry out from their hotel on a day-to-day basis.”

Monical ends the piece urging teachers who use phone hotels to “remind students to silence their phones prior to checking them into their hotel.”

But rules are rules, and there are consequences if students are caught using their phones in class. Fierro stated that teachers are expected to first give a verbal warning to the student. The second incident would result in confiscation and the phone given to Fierro. “Then I talk to the student about it and let the parent know via email,” she continued. “If it’s the second time the phone has been turned in to me, then the parent has to come and collect it.” Fierro stated that fortunately, phone confiscation isn’t a weekly occurrence and that although there have been a couple of students prone to using their phones in class, the habit is not endemic.

To help keep it that way, teachers seem to appreciate the ability to manage check-in at the “hotel.” “I like that students are not constantly checking their phones, sneaking a text, or distracted by the phone’s vibration,” said Branisa, “Not having immediate access to their phone is helping them focus and stay on task.”