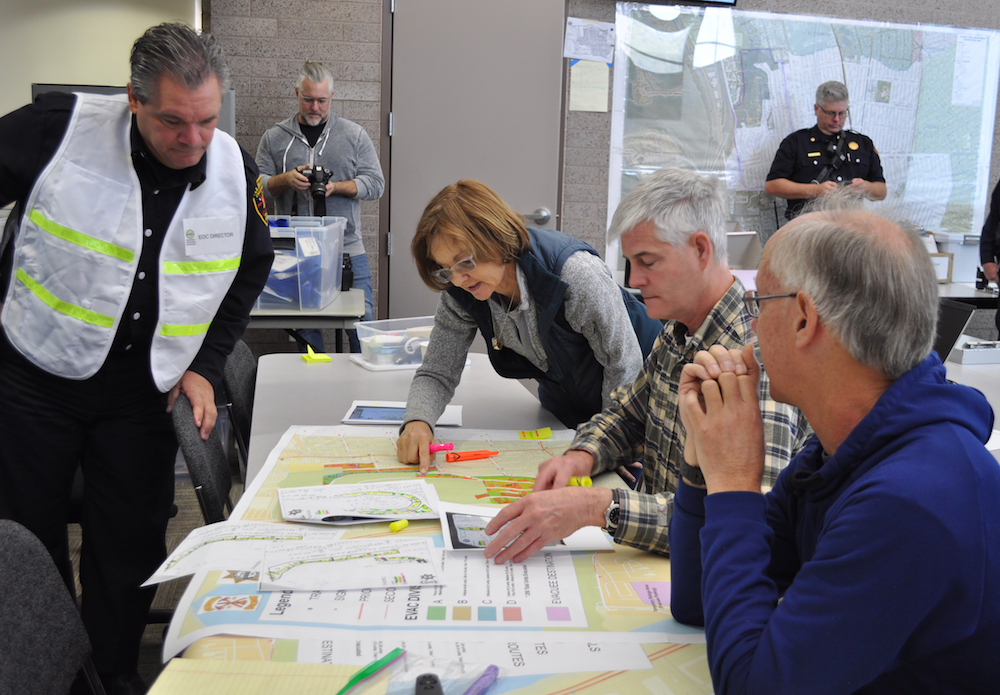 On Nov. 3, city staff from Piedmont, Berkeley, El Cerrito, and Albany participated in a joint evacuation exercise designed to help local cities tackle and identify the challenges during an emergency and evacuation: information sharing, operational coordination, public information and warning, and situational awareness.

Created by the City of Albany Fire and Police Departments, the scenario revolved around a fictional morning wildfire started by an arsonist in a large 18-acre eucalyptus grove sitting at the top of Albany Hill. In the drill, the fire races towards a large residential community in Albany and local fire and police must organize the evacuation of over 250 residential units in the hill neighborhood. Local residents of that area were active participants in the drill.

According to Black, Piedmont Fire has been partnering with Albany Fire for emergency operations training and sees opportunity in partnering with surrounding agencies in the event of disasters. “This will be a learning experience and exercise for residents to prepare for a wildfire,” said Black. “My goal is to support these other agencies that are being really proactive and building these relationships to have an evacuation scenario.”

During the fictional event, Griffin, Kent, and Jackson stayed in the Emergency Operations Center (EOC) with a neighborhood map to track evacuations and gain information about mapping, planning, and zoning. Bowers was in the Command Center with others receiving information from the field and relaying it to the EOC. Black and Carlisle were out in the field notifying and evacuating residents.

According to the City of Albany, there were 55 vehicles and over 150 evacuees that made their way down to the temporary refuge area at Golden Gate Fields where they checked in as “evacuated”. There they were able to browse information booths from Albany Fire and Police Departments, Albany Community Emergency Response Team (CERT), and the American Red Cross. Participating residents received a certificate of completion.

Albany Fire Chief Lance Calkins said that there are multiple ways to notify residents including AC Alerts (Alameda County’s Mass Notification System), landline phones, and instantaneous alerts sent out by field units. “We’re going to put up exact counts of which residents were alerted, which ones aren’t home, and which ones need assistance,” said Calkins during the drill. “People in the city are going to want to know how many houses are damaged. Counts will let us know.”

When asked about evacuating residents with mobility issues, Calkins said that city staff could send a car or ambulance to their residence. Calkin stated that PG&E doesn’t share the locations of medical-dependent residents, so the City of Albany is working on other methods of identification. He said that sending out mailers and surveys could help the city be better informed on which residents would need additional accommodations.

“One of our missions is to reach out to the entire community and map out which residents would need help,” said Calkins. As reports were coming in from the field, Piedmont staff highlighted residential units on a map at the EOC. They marked which units had been evacuated, which units did not answer, and which units needed help.

During the debriefing after the drill, reports from field units shared similar issues of receiving spotty cell coverage in some areas of the hill. There were also some issues with image sharing, as well as some delays in communication from dispatch to the EOC on the initial AC Alert notifying residents of the evacuation. Black recalled his experience going door-to-door on foot and encountering a couple of people who were not informed about the drill due to language barriers. “Carefully planned as the drill was, there were still surprises that you didn’t know about until you did the drill,” said Griffin.

Ideally, a wildfire evacuation would run as smoothly as the Albany Evacuation Drill. However, that just isn’t the reality of disasters. According to the Piedmont’s disaster preparedness guide, “Get Ready, Piedmont!”, Piedmont police and fire departments will be overwhelmed during emergencies and might not receive mutual aid from surrounding agencies, especially if Oakland and large areas of Alameda County are heavily impacted.

The City of Piedmont has 90 full-time employees who are disaster service workers and may be required to report to the city during an disaster.

“We have to make sure that communications in the field and emergency operations center are as good as they can be,” said Jackson. “The drill is all about finding out what can be improved.”

Although Griffin stated that there are enough employees in Piedmont to help with a disaster, both Bowers and Black agreed that residents cannot rely solely on public agencies during emergencies and should take ownership in drawing their own family evacuation plans.

“No amount of pre-planning is going to be perfect,” said Black. “The scenario is going to change. Use your instincts; if you see smoke, go in the opposite direction.”

“When it happens, it’s going to be organized chaos,” said Bowers. “People need to have an all-hazards mindset.”

Because the City of Piedmont has an Emergency Operations Plan and a recently updated Local Hazard Mitigation Plan, Piedmont is eligible for reimbursement from the state or federal Government, depending on the severity of the disaster.  You can also view Piedmont’s disaster preparedness guide, “Get Ready, Piedmont!” at this link.