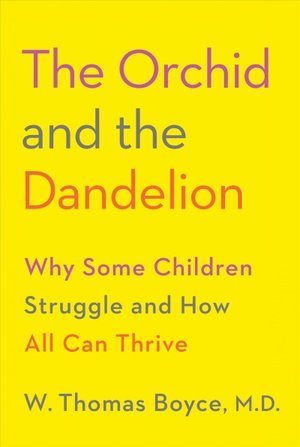 What if the children about whom we worry most are actually those with the greatest promise? What if youth whose lives are marked by turmoil and difficulty are plausibly heirs to the brightest, most creative futures?

These are two questions posed during the third Education Speaker Series event hosted by the Piedmont Education Foundation on Tuesday, Oct. 29 in the Ellen Driscoll theater.

Roughly 85 attendees gathered to hear W. Thomas Boyce, MD, a pediatrician and emeritus professor in the Departments of Pediatrics and Psychiatry at the University of California, San Francisco. He has studied nature, trauma, and adversity facing children and families for over 40 years. His book, The Orchid and the Dandelion: Why Some Children Struggle and How All Can Thrive was published this past January.

In his own words, Boyce describes the story as both “scientific and personal” and “offered as a gift of encouragement and hope for all those who teach, protect, care for, raise or worry over children, as well against those who have struggled since childhood to understand the origin of their own affliction with human differences.”

Most children can, like dandelions, thrive in the harshest circumstances, but a minority of others like orchids, either blossom beautifully or wane disappointingly depending upon the care they receive.

Most children in families, classrooms, or communities are more or less like dandelions, says Boyce. Dandelions prosper and thrive almost anywhere they are planted. Like their flower counterparts, dandelion children “are the majority of children whose wellbeing is all but assured by their constitutional hardiness and strength,” said Boyce.

Dandelion children are kids who are often extroverted. They seem to be comfortable with novel situations, like birthday parties where they might not know anyone else. They move more easily into such circumstances and show more stability and resiliency when confronting low and the high-stress naturally occurring settings.

“We have to learn to make an intuitive judgment about when it is important to push the [orchid] child onto a fearful circumstance in the anticipation that the child will actually be able to cope and try and talk about the experience versus when to allow the child to withdraw and that line is a very difficult thing to discern,” said Boyce.

Boyce’s research has roots in troubling and personal circumstances that he bore witness to at a very young age. His sister, Mary, developed a chronic biomedical disorder at the age of 11 and carried a diagnosis of schizophrenia by the age of 20. During graduate school, she gave birth to a disabled child. “Watching children slip away into dark territory of serious psychological troubles, addiction, school failure, or criminality is an agony almost beyond description,” said Boyce. “Though never having sustained this level of worry as a parent, I have had a direct and indelibly memorable encounter with such anguish throughout much of my life because of my sister.”

This personal experience prompted Boyce to wonder how is it that two children conceived by the same parents, born into the same family, neighborhood, and schools, had such dramatically different life trajectories.

His research led him toward a complex array of reasons why one child in a family may be an orchid (his sister Mary) and another child a dandelion (Boyce). Such causes include an unshared family environment (i.e. siblings raised in “different” families where they experienced separate lifestyles), sibling differences in genetic risk, birth order and gender, or epigenetic interactions between genetic variation and the unshared family environment.

At the end of his presentation, Boyce reminded attendees about the main takeaway: the children we often worry the most about are sometimes those with the most remarkable cause. “That’s a really freeing and amazing kind of reality that we’ve seen enacted over and over again,” said Boyce. “Under conditions of support and care, troubled childhoods are transformable into lives of enduring health, positive development, and astonishing achievement.”

What allows an orchid child to thrive is: being able to own one’s true self in recognition and expression, establishing and following routines, showing “caritas” (or steadfast love) for orchid children, imaginative play, balancing fear with mastery (knowing when to push orchids into fearful circumstances in the hopes the child will cope and develop resiliency) and ultimately, celebrating human differences.

“In the end, it is not vulnerability, but sensitivity, that defines the orchid,” said Boyce. “When given the right support, that sensitivity can blossom into lives of great joy, success, and beauty.”

Boyce’s full presentation on Orchid and Dandelion children (recorded at a different event by Family Action Network) can be viewed here. For a shorter TEDx version of Boyce’s talk, click here.

Parents who have orchid children can read about the personal experience of raising an orchid child in Motherly author Kristy Ramirez’s story.

The next Education Speaker Series, “Cannabis & The Developing Brain” is scheduled for Tuesday, Nov. 19 from 7:30 p.m. to 9:00 p.m. at the Ellen Driscoll Theater.