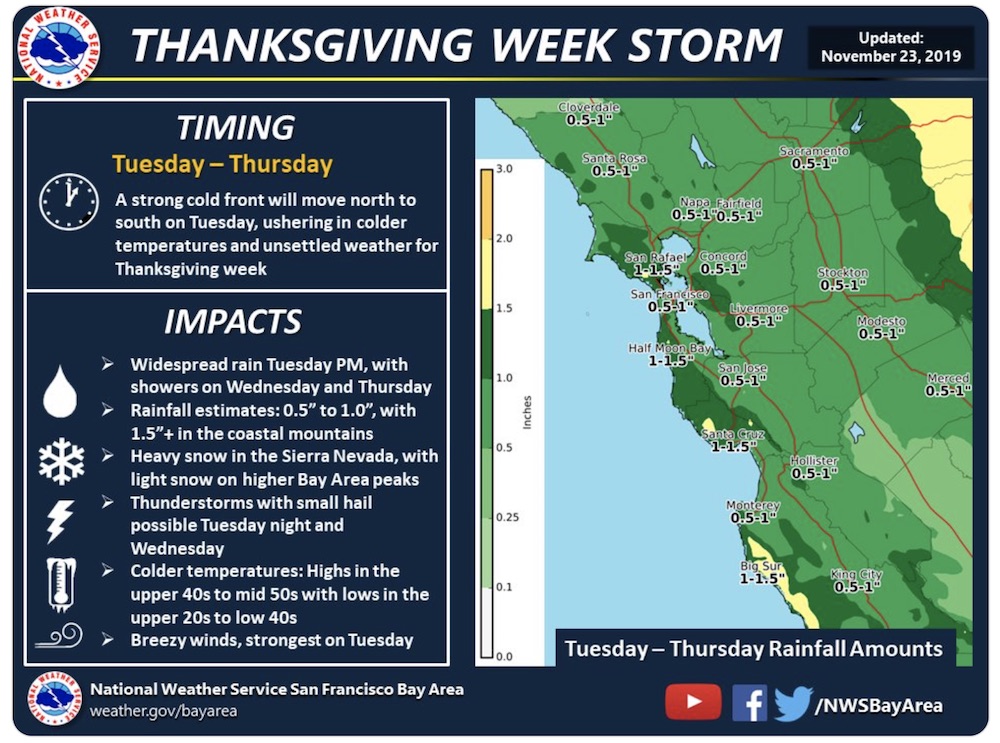 The Bay Area’s first rainstorm of 2019 is expected to arrive just in time for the Thanksgiving Day holiday travel period and immediately after another dry wind event, according to the National Weather Service.

The storm is expected to arrive on Tuesday afternoon into the evening hours across the region, but will be set-up by today’s offshore wind event that was watched closely for increased fire danger.

UPDATE (Monday 2pm) from the Bay Area National Weather Service: A Wind Advisory has been issued for elevations above 1000 feet across the region and along the coast from Sonoma County through the SF Peninsula Coast from 4 pm Tues until 4 am Weds PST. @NWSBayArea

Tuesday will see rain arrive in the North Bay in the afternoon hours, followed by the rest of the Bay in the evening hours, meteorologist Will Pi said. Winds are expected to be the strongest on Tuesday night as the storm arrives, expected to be around 30-40 mph.

Rainfall between Tuesday and Thursday is expected to be between 1/2-inch to 1 inch, with possibly 1.5 inches in the Santa Cruz Mountains and Santa Lucia Mountains.

Pi said showers are expected to continue Wednesday into Thursday, with a dive into freezing temperatures Thursday night and Friday morning. The Valleys are expected to drop into the 20s at night, North Bay areas are expected to see lows in the 30s to 40s and low 30s are expected from San Jose into the Gilroy area. Friday will see the region drying up, with highs staying in the low 50s but lows coming up before an overall increase in temperatures on Sunday, Pi said.

Snow levels are expected to be between 2,500-3,000 feet and may fall as low as 2,000 feet Thursday if moisture remains in the area, Pi said. Travelers going across the Sierra Nevada Mountains are warned to carry chains and be ready for changing conditions as several feet of snow is expected.