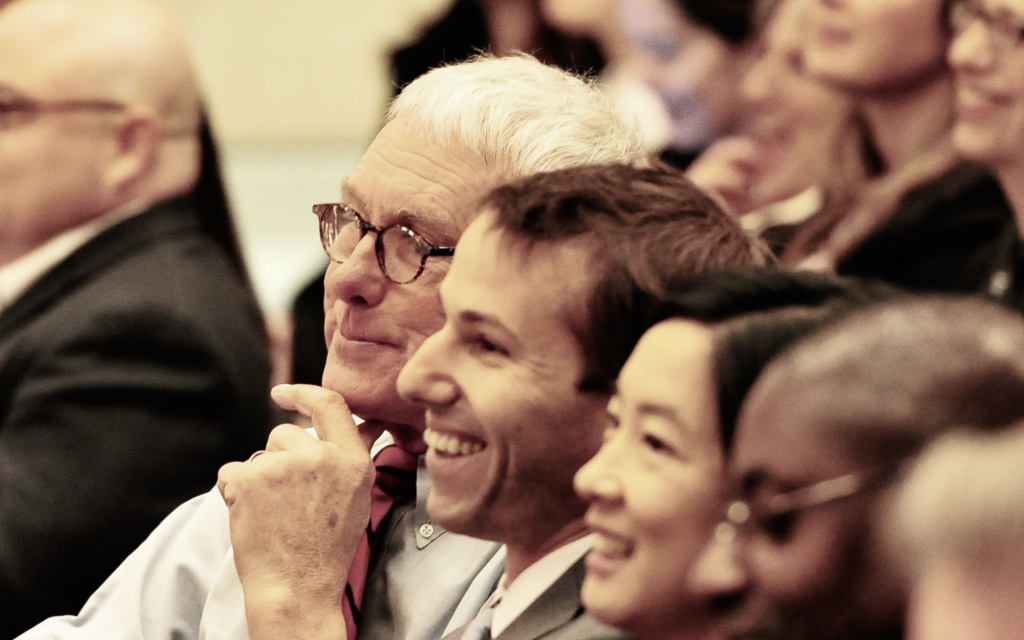 Buck Delventhal, left, and his ‘family’ at City Hall.

This article originally ran in Mission Local and is reprinted here with their permission. The Delventhal name is familiar to many in Piedmont. Buck Delventhal was raised here and graduated from Piedmont High School in 1960.

Forty-one years ago, City Attorney George Agnost had a nightmare.

“George tells me, ‘Jim, I had a dream last night,’” recalls Jim Lazarus, then a fledgling city attorney. And a terrible dream it was: Burk E. “Buck” Delventhal embarrassed Agnost in front of Gov. Jerry Brown by repeatedly interrupting him and talking out of turn.

“I had to fire him!” Agnost told Lazarus, still shaken from the horrible dream. “I had to fire Buck Delventhal! It was a nightmare!”

It was the summer of 1978 and, soon, San Francisco would be beset by a series of nightmares — real nightmares. Delventhal was a youngish city attorney; he had in 1970 listed his prior occupations on his resume — driving a tractor, working as a bookstore manager, working in a Safeway warehouse — but was hired by the city anyway. Was hired, in fact, before he even left the room because it was clear how smart he was — and how decent he was.

Agnost’s dream “shows the strength Buck had in that office,” Lazarus says, even four decades ago. “He was the heart and soul of the governmental side of the city.”

As he would remain until last week, when City Attorney Dennis Herrera had a nightmare of his own. And there was no waking up from this one: On Oct. 24, Herrera penned a sad letter to his staff that, after 49 years and four months on the job, Delventhal would be retiring immediately to deal with a previously undiagnosed medical condition.

Just two days later, Herrera shocked the staff by informing them that Delventhal was dead, one month short of his 77th birthday and eight months shy of half a century on the job.

Like the caretaker of the Overlook Hotel, it felt as if Delventhal had always been here. His longevity — while remarkable — wasn’t the story, though. Plenty of marginal people hold onto jobs.

It turns out the best way to be a wise and smart old person is to start out as a wise and smart young person. Buck Delventhal was a prodigy from Day One, and then he amassed 49 years and four months of institutional memory.

And this matters, because Delventhal didn’t apply himself to amassing profit or power. He worked for you.

Do you like equality? Delventhal did: He played a major role in this city’s groundbreaking equal benefits legislation and, subsequently, its fight for marriage rights.

Do you like the Giants? Delventhal did: In 1992, City Attorney Louise Renne tasked him and Jack Bair to scour the team’s lease after the club announced a potential move to Tampa Bay — and, surely enough, the attorneys found a clause that required notice be given by a certain date, which had passed. During the delay, local buyers came forward and the team was saved.

In fact, Delventhal helped save the Giants twice. He helped win the injunction that prevented the team being sold to Toronto-based owners in 1975, staving off the unthinkable scenario of Gary Maddox patrolling center field with a black-and-orange “T” on his hat.

An article in UC Hastings’ newsletter, where Delventhal earned his law degree in 1969 and taught as an adjunct professor, sums up his area of influence thusly: Delventhal’s successful litigation and legislative works have resulted in environmental protections; increases in public health and safety; support for minority businesses; a stronger, more equitable educational system; additional revenues for the City in the post-Proposition 13 era, and myriad other large and small impacts on the lives of the people of San Francisco.

By the way, the legal memo justifying last year’s Proposition C, which may yet open up $300 million a year in homeless and housing funding — that was Buck, too.

When the City Attorney’s office expresses supreme confidence in the city’s ultimate court victory and the access to that money, now you know why.

Aregurgitation of Delventhal’s legislative highlights, however, obscures his true and deep role in this city. He was, until virtually his dying day, “the go-to lawyer for the city’s toughest questions,” said Sen. Dianne Feinstein, who broke into city government at around the same time as Delventhal. “I relied on him almost daily during my 18 years in San Francisco government.”

And we really do mean until virtually his dying day; he was reviewing legal briefs written by his governmental team in his hospital bed at CPMC Davies up until he lost consciousness.

Delventhal was a human computer and a human encyclopedia; his younger brother, Mark, recalls him telling a colleague exactly what page to consult in the City Charter. “He had a photographic memory,” Mark Delventhal says. “His memory recall was unparalleled,” adds Supervisor Aaron Peskin.

So there’s that. But very few people praised Dizzy Gillespie for remembering all the notes or Daniel Day-Lewis for remembering all his lines. Delventhal remembered everything, and then he refined it with his stellar legal mind. And he would offer the same analysis to Feinstein or Art Agnos or Gavin Newsom or London Breed or any of the 10 mayors he served — because the law was the law.

We are told, in fact, there was a mayor known for saying “Don’t send Buck,” when proposing new ideas. Some people, it seems, would rather not be informed their plans are dodgy, impractical — or illegal. Our sources asked us not to reveal who this mayor was.

But do we even need to?

Mark Delventhal attempted, on multiple occasions, to get his big brother to run for office. He never bit. “He told me he had no desire to stand up and tell people how great he is and how they should vote for him,” recalls Mark Delventhal. “He said he already had the best job in the world. He told me that many times.”

Buck Delventhal was “A legal genius with no ego and no entitlement — but he was a genius,” continued his brother. “So he helped guide the path and see San Francisco did things properly and sensitively and within the law. It was a marriage made in heaven.”

And this happened, as Feinstein said, every day. Her successor, Agnos, confesses that “I used his office as a sanctuary to get away from the huckledebuck of the mayor’s office. I would slip out the back door into his office without anyone knowing, simply to be in the presence of his warmth, good humor, and dazzling smile.”

Matt Dorsey, the former longtime communications director for the city attorney’s office, said that, earlier this month, he found himself grappling with an arcane issue involving overlapping state and local regulations — and the situation altered depending upon whether a referendum or initiative was involved. He called Delventhal, who answered his question in two minutes, and additionally explained the history behind it.

“I tried not to overuse him when I was press secretary,” Dorsey said. “I tried to save him for the hard questions.”

Peskin notes that, “I’ve been in and out of this building for 20 years and I do know what deputy city attorney to call over what issue — but if it was some lofty, super-complicated ‘how-do-I-dissect-this-thing-and-put-it-back-together?’ issue, I called Buck.”

And, yes, Buck had no problem telling Peskin his idea might be dodgy, impractical — or illegal.

“Oh, absolutely,” Peskin says. “But he’d give me that little smile and say ‘No way.’”

Mayor London Breed ordered the flags lowered to half-staff at City Hall following the death of Buck Delventhal — an extraordinary move that was much appreciated by his survivors.

It’s rare to watch the physical and the metaphysical collide like this. But it went further than that.

Delventhal’s 1996 essay was about the real and symbolic role City Hall plays in San Francisco— roles Delventhal was both keenly aware of and helped to shape for the past 49 years and four months.

At the time this essay was penned in ’96, Delventhal had been forced out of the building so it could undergo needed seismic upgrades. And while he longed to walk through its doors again, “it will not be the same. … A building needs aging before ghosts and eccentrics can find a place. Even though City Hall will not reopen for nearly four years, I await that day with a quiet sense of joy that I will be going home.”

City Hall is a building. It is a great building. But it is only a vehicle for the thoughts and hopes and ideas of those who pass through it.

Delventhal spent his life guiding this vehicle. In the hospital, before the end, he had time to converse in fluent Spanish with one of his nurses — one of seven or eight languages he spoke — gently correct the grammar of another — he was a grammar nut — and then lock eyes with his brother and his wife and say: “Hey, I had a great run.”

So, he knew. Buck Delventhal pretty much always knew.

And, as he lay in a coma, his family let it be known that now was the time to come and say goodbye. “And they started coming, and coming, and coming,” says Mark Delventhal. Perhaps 300 people filed through that room at CPMC Davies. Mayors. City attorneys. Supervisors. Secretaries. Everyone. They held his hand. They kissed him. They cried.

That outpouring of love will provide joy to his survivors for the rest of their lives.

In terms of getting its deepest questions answered, the city has sailed off the map. For those who knew Buck Delventhal, it’s a nightmare right now.

But, if there’s any solace to be taken, the man did live his dream.