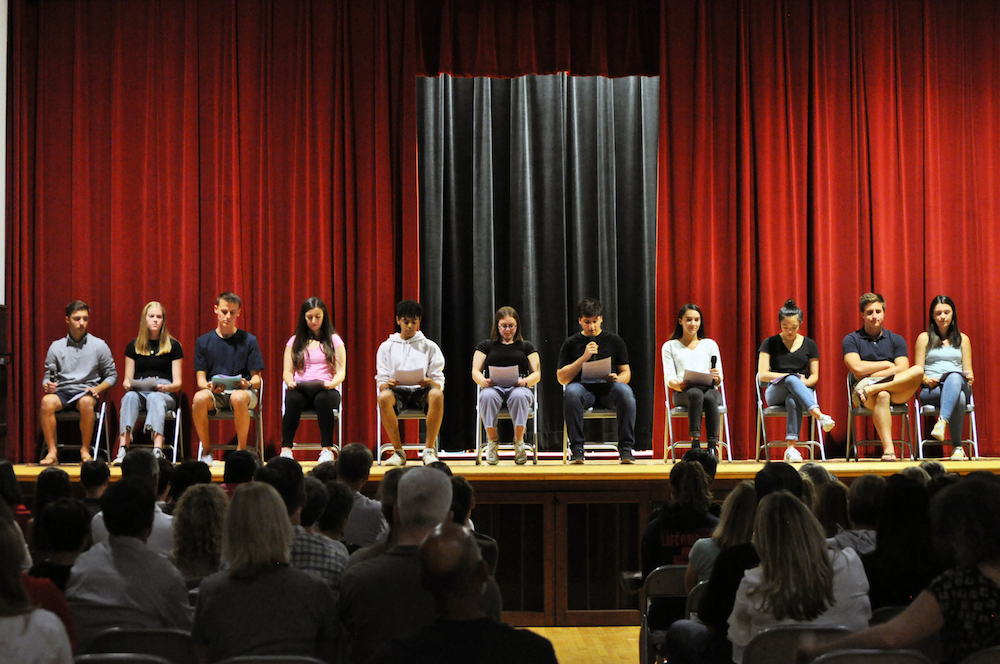 PHS and MHS students on stage during the October 2019 Consent Assembly.

The Consent Assembly was conceived of as forum for Piedmont students to recount these stories by PHS drama teacher Kim Taylor in 2006 after a rape was reported in the high school community. Taylor, who has taught at PHS since 2004, recognized in the aftermath of that event that consent around sexual activity is one of the most important conversations that students, schools, and parents should have together. The assembly is presented every year for parents, and twice during every student’s high school years in the freshman and senior classes.

On stage, 17 PHS and MHS students in separate groups told the stories of anonymous students who had documented and shared their traumatic experiences. The scenarios included several situations of date rape experienced by students at parties and elsewhere, and a case involving students passing around a nude photo of another student and the fallout from that event.

“From the very start, the message always has been, to any survivor, you’re not alone,” said Taylor. “Number two is to talk to someone if something has happened to you because I think it’s the shame of staying silent that eats away at people. I think the healing begins when you can tell your own story, when you feel like you have some agency in your life and some power because I think there’s powerlessness in having something happen to you.”

One student performer elaborated on the definition of sexual content: the affirmative conscious decision by each participant to engage in mutually agreed upon sexual activity. Consent cannot be given under the influence of drugs or alcohol or if somebody is asleep or unconscious. Additionally, consent must be given in real time and it must be ongoing, which means that the person needs to pay attention and communicate throughout any sexual activity and particularly whenever there’s a new level of intimacy.

Without consent —  the message at the Consent Assembly pushed for an ‘enthusiastic yes’ — sexual activity is rape or sexual assault, according to Planned Parenthood and the United States Department of Justice.

Several students shared statistics regarding sexual assault and violence. According to the Centers for Disease Control and Prevention, one in three women and one in four men experienced sexual violence involving physical contact at some point in their lives.

After the first scene, a student shared information about how students can support sexual assault victims. “If someone tells you they’ve been assaulted or someone tried to assault them, believe them,” she said. “After hearing a story, if you need some help, talk to a trusted adult instead of a peer. Gossip spreads like wildfire in Piedmont and other people’s stories of pain are not yours to tell. It’s hard to live in a community where people are in pain. We must work together to help each other heal.”

One story was about a male student who realized that despite his good intentions, he had a long way to go in understanding consent and respecting his girlfriend’s boundaries. “But I love her, I respect her, I’m basically a feminist,” he said. “But the more I thought about it, the more I realized. I put her in a spot of having to tell me to stop instead of asking for her permission. Being in a relationship, whether one night or four years isn’t about guessing what the other person wants and hoping you get what you want. You have to communicate.”

One student performer reminded the audience that non-consensual sex is a felony punishable by jail, rehabilitation, fines and the possibility of being labeled a sex offender for life, “yet somehow people think it’s weird or not worth taking the time to ask for consent, but given what’s a stake for for all of us, it’s not weird at all,” she said.

“I was very glad to see the Consent Assembly capture a variety of perspectives from gay, lesbian, and queer identified students,” said Natasha Singh, a sexual literacy educator who has been working with PUSD for four years on topics that fall under the umbrella of sexual literacy, including sexual assault prevention and healthy relationships. “I also like the addition of the digital ethics; that inclusion was important because in my work I see that happening among younger students.”

Singh believes that consent and honoring boundaries must be taught to children when they are young. After children are clear about that, then these lessons can be translated into sexual consent.

Shafia Zaloom is a health educator whose recently published book “Sex, Teens, and Everything In-Between” was being sold at the Consent Assembly preview night. Although Zaloom didn’t see the assembly herself, she thinks that shining light on these issues and talking about them in real and relevant ways helps create a space for young people to represent themselves in ways that are authentic.

“It is incredibly valuable, especially for the adults in this community,” said Zaloom. As a teacher in the Bay Area, Zaloom has observed the high-achieving, performance-valuing meritocracy culture in many communities here. She believes that this culture contributes to why young people are lacking in the practice of connecting with people, reading social cues, and being able to work through disagreement and awkwardness.

“How do we start making a change?” said Taylor. “I think until you name a behavior and share that it isn’t normal, you can’t try to help change the behavior. We talk about it for what it is.”

Resources for students and parents:

“Rape is the most underreported crime; 63 percent of sexual assaults are not reported to the police.”

If you or someone you know has been sexually assaulted, tell someone:

-A parent or trusted adult

-The Wellness Center Counselors or another trained counselor or therapist

– “Girls and Sex” (By Peggy Orenstein; recommended by Natasha Singh)

– “The Macho Paradox” (By Jackson Katz; recommended by Natasha Singh)