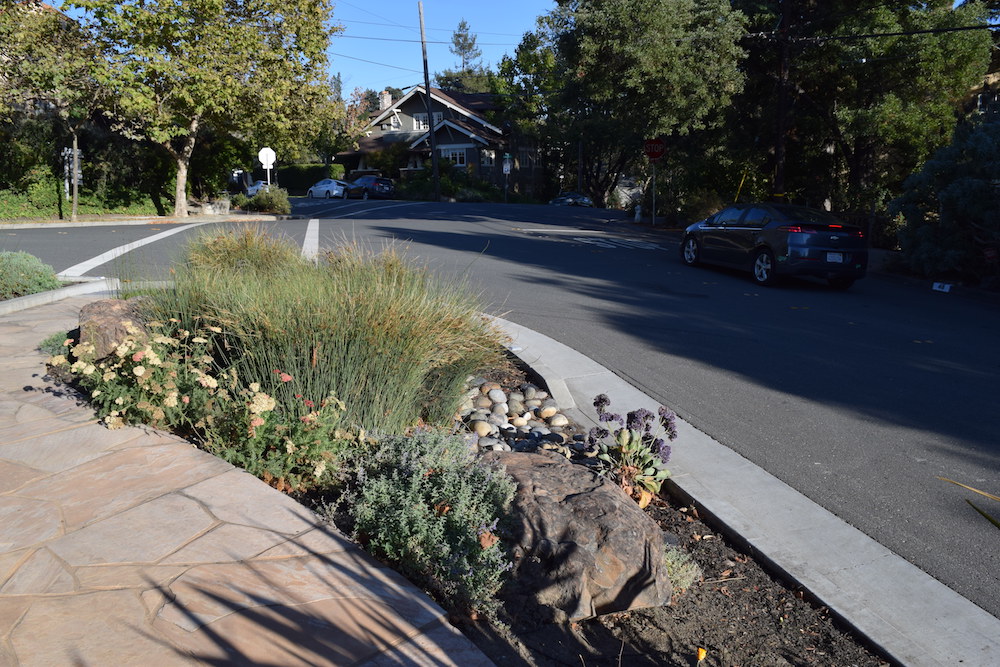 The bioswale at Ramona and Ronada Avenues, into which storm runoff flows for natural filtration through soil.

That 6-0 vote came after commissioners and audience members were assured by Piedmont’s mayor and city staffers that the relatively short list of eight proposed GI projects mentioned in the document is neither set in stone nor reflects the scope of the city’s long-term plans.

The Green Infrastructure Plan’s primary function is to ultimately send cleaner storm runoff water to Lake Merritt and, ultimately, to San Francisco Bay. Much of that involves channeling storm runoff that otherwise would flow across impermeable surfaces, like asphalt and concrete, directly into storm drains. The runoff would instead flow through “bioswales,” landscaping that promotes native plants with minimal demands for water and fertilizers and helps collect and purify water runoff from streets.

There were questions to city staff about that short project list. “You could have been more ambitious about what you chose to put in there,” Park Commissioner Betsy Goodman said.

The proposed projects, at this point, are “placeholders” needed for the plan to qualify for submittal to the San Francisco Bay Regional Quality Control Board and the Alameda County Clean Water Program. They also are projects city planners deem worthy of pursuing — at this point.

“No city can commit to projects over 10 or 20 years with any amount of certainty,” Mayor Robert McBain told the commissioners Wednesday. “Priorities will shift with time and funding.”

City Administrator Sara Lillevand what is billed as a “plan” is probably better described as a “document.”

The Green Infrastructure Plan took a sort of reverse route to the Park Commission. It had come to the City Council first, on Sept. 16. But council members didn’t vote on it, instead saying the Park Commission — and the public — should have a chance to review and comment on it first. Two members of the public spoke on it Wednesday, and several others had submitted emailed comments to the city.

Piedmont so far has three of the plant-intensive bioswale areas — in Dracena Park, at the intersection of Kingston and Linda Avenues, and at the intersection of Ronada and Ramona Avenues. A fourth one, the first as proposed in the draft Green Infrastructure Plan, would be at the “Lower Grand Triangle” at Grand Avenue at Holly Place.

The plan now comes back to the City Council, which will decide whether or not to accept the Park Commission’s recommendation.