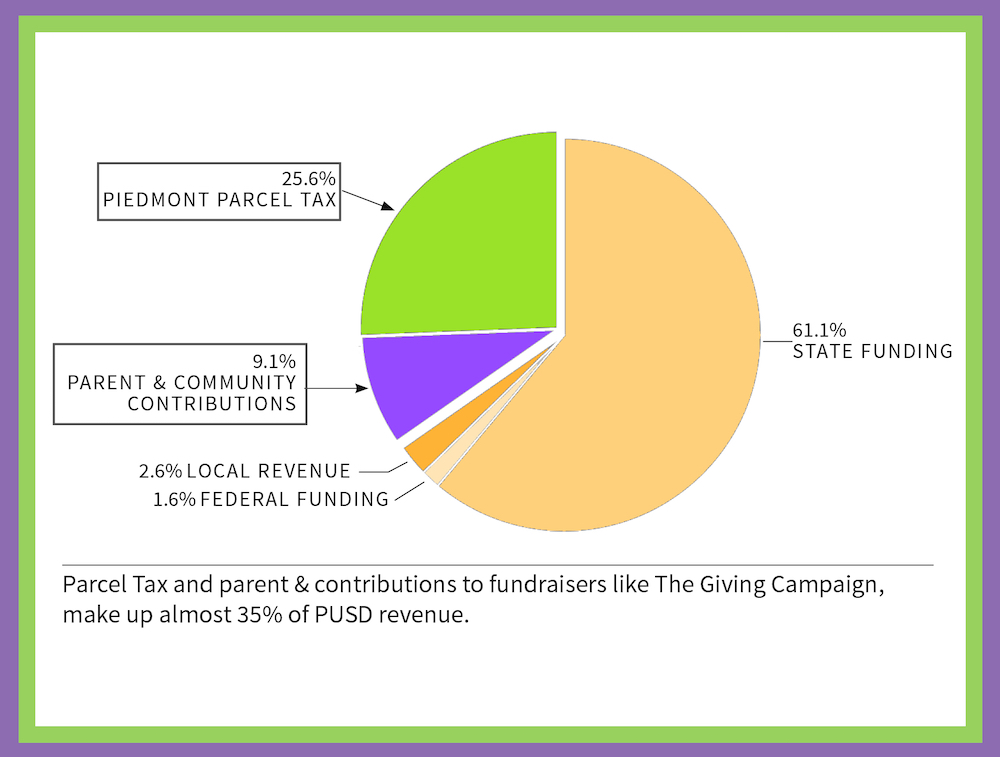 School parcel tax measures G & H are on the ballot on November 5th, and the Piedmont Education Foundation’s Giving Campaign, the largest annual fundraiser for Piedmont’s schools, launched at the end of August.

Measure G, which will renew and extend the existing parcel tax, is set to expire. Measure H will provide funds to support teacher and staff compensation, allowing the PUSD to attract and retain qualified teachers and support staff throughout the district. Funds from the Giving Campaign are granted to the PUSD for a wide range of essential programs and services at Piedmont schools.

Together, parcel tax revenues and donations from fundraisers like the Giving Campaign fund nearly 35% of the current Piedmont Unified School District’s annual budget. Without this combined community support, Piedmont’s schools and the student educational experience would undoubtedly decline.

Declining school funding from the State and the dire need to increase compensation for teachers has resulted in a wave of support from the Piedmont community. A large group of Piedmont residents is working tirelessly to educate voters about the critical importance of a “yes” vote on measures G&H on November 5th (volunteers have distributed printed literature about Measures G&H to hundreds of homes throughout Piedmont), and the PEF’s Giving Campaign had the strongest launch in its history.

This fall in Piedmont is all about bolstering support for teachers and schools in the absence of a solution from Sacramento.

At the Piedmont Board of Education meeting on September 11, PUSD teachers shared powerful testimonies about the importance of this support for PUSD’s schools.

The Board of the Piedmont Education Foundation was the first non-profit board to reach 100% participation in the Giving Campaign, followed immediately by the PUSD School Board. Other boards are quickly following suit to demonstrate their public commitment to Piedmont’s schools.

The PUSD Board issued this statement: “The Board of Education is unanimous in its support for Piedmont Education Foundation’s Giving Campaign fundraiser. We encourage all parents of children in the district and all residents of our town to learn about the vital role community contributions play in keeping our schools strong and to consider supporting the campaign with a tax-deductible donation.”

Hilary Cooper, Doug Ireland, and Christine Wente von Metzsch, co-chairs of the Yes on G&H campaign as well as Nicki Gilbert, Emily Harrold, and Amelie Kappes, co-chairs of the PEF Giving Campaign are working closely together to ensure the community understands that both the revenue from Measures G&H and tax-deductible donations to the Giving Campaign annual fundraiser are essential.

To make a tax-deductible donation to the 2019-2020 PEF Giving Campaign, go to www.piedmontedfoundation.org.

One thought on “Commentary | PEF’s Giving Campaign, parcel tax Measures G&H are BOTH essential to our schools”