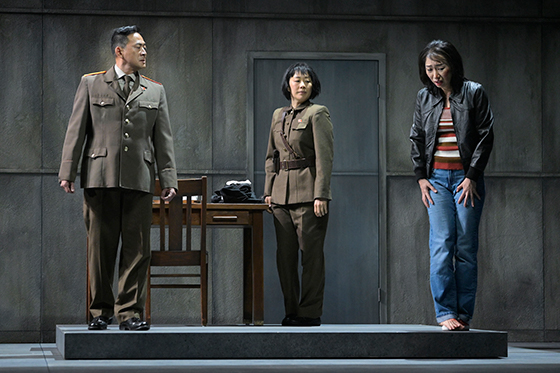 Captivating production elements, occasional well-crafted staging and a story that sizzles with political intrigue and events drawn from Japanese and Korean history add up to a riveting show in Berkeley Rep’s The Great Wave. Although a few scenes in the nearly-three-hour play allow momentum to droop and North Korean identity, politics and culture in playwright Francis Turnly’s script are hardly more than clichés, director Mark Wing-Davey’s keen instincts create heightened drama without hyperbolic overacting from the cast.

Scenic Designer Chika Shimizu, Lighting Designer Lap Chi Chu, video from Tara Knight and a soundscape created by Bray Poor combine forces to create otherworldly effects that look, sound and move like an animated graphic novel. The tremendous wave in Act I, along with tumultuous sea imagery, and Act II’s dazzling, colorful video collage of parades, ceremonial dances, and military marches are simply spectacular. A Japanese kitchen replete with accurate replicas of the country’s typically small-scale appliances illustrates the integrity in every detail of the set.

The action spans nearly 25 years, moving from 1979 to 2003. While a ferocious storm rages outside, two sisters, the impulsive Hanako (Jo Mei) and sparklingly intellectual Reiko (Yurié Collins), spar over clothing, the attention of a boy, Tetsuo (Julian Cihi), and diverging academic interests—Hanako folds exam papers into origami rabbits, Reiko excels in all subjects. Defying their mother’s wishes, the sisters venture out into the slashing rain. On the beach, Hanako is swept away by a massive wave. Reiko believes she has seen three long-haired men snatching her sister, but a head wound she sustains casts doubt on her report’s veracity.

From that moment on, a cascade of trouble engulfs the family and Tetsuo. Accusations and distrust aimed at Tetsuo send his parent’s business into ruin and cause him to flee the village. Reiko and her mother are flung into endless cycles of frustration, grief and anger as an investigation reveals no clues and Hanako’s body remains unfound. Etsuko (Sharon Omi), the girl’s steely, steady, hard-working mother, resorts to tossing messages in bottles into the sea in hopes one will reach her lost daughter. Reiko puts her life on hold and posts countless “girl missing” posters.

The play splits into two halves when what has become of Hanako is revealed: She has been abducted by North Korean operatives in order to train spies the regime intends to send to Japan. Forced to learn Korean and then to drill Jung Sun (Cindy Im) and other espionage agents in the language and habits of the Japanese, Hanako believes she will be freed when her task is completed.

To reveal more would defuse the play’s impact, but several plot lines draw largely from history: real cases of Japanese citizens abducted by Kim il-Sung’s North Korea; the tremendous famine in North Korea in the 1990s; a North Korean agent blowing up a South Korean plane prior to the Olympics in Seoul; ideological differences that continue to exist today between North Korea and Japan, and more. With women as the primary protagonists, Great Wave presents a valuable, more-nuanced-than-most study in female power dynamics.

Despite the play’s dramatic tension being dissipated by too many bounces between Hanako’s tragedy in North Korea and her family’s struggles with personal grief and governmental bureaucracy in Japan, Wing-Davey proves skilled at staging juxtapositions of scale and capitalizing on the set’s enormous seawall and sliding platforms to establish distance in time or location.

Great Wave’s takeaways, other than being visually compelling and occasionally hitting high points in staging, include ideas presented about freedom, identity, loyalty versus obligation, adherence to sameness or acceptance of differences, and other themes. With tightening, the epic story of two nations in conflict might rise to its full potential.