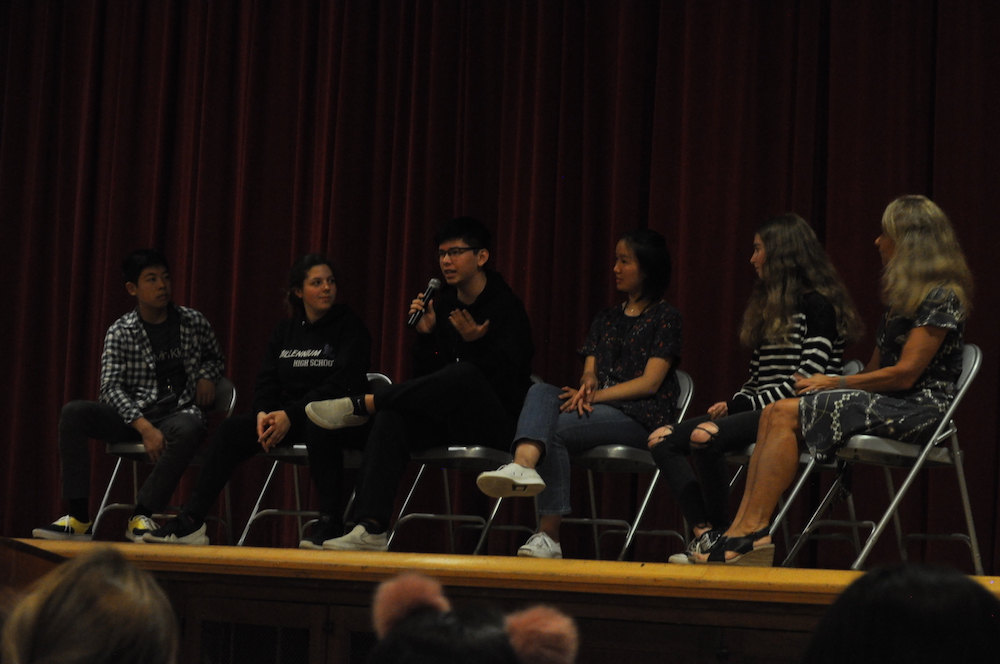 The first Education Speaker Series event of the year was held on Tuesday, Sep. 10 at the Ellen Driscoll Theater. About 150 attendees arrived to watch Indieflix’s “Like,” a documentary exploring the impacts of social media use, particularly on the lives of young adults that was released in 2018.

After the film, Piedmont High School and Millennium High School students participated in a discussion on stage facilitated by LookUp founder and Executive Director Susan Reynolds (a PHS alumna herself), who has worked with students since last year on digital wellness.

The film asked the audience: Are we really using technology or is technology using you? It made compelling points and expanded on concepts like “Snapchat Dysmorphia” , the Dopamine reward reflex associated with social media addiction, confirmation bias, echo chambers and phone-free school campuses

A Pew Research Center survey conducted in 2018 found 95 percent of teens now report they have a smartphone or access to one.

The Center also looked into the most popular social media platforms used by young adults: Snapchat and Instagram. Data showed that roughly 77 percent of Snapchat users (age 18 to 29) say they use the app every day. Sixte-eight percent say they use Snapchat multiple times a day. Seventy-six percent of Instagram users in this age group visit the site on a daily basis. 60 percent reported that they visit several times a day.

After the film, attendees stayed to watch five students participate in a panel.

“These young adults are living very different lives than the adults lived growing up,” said Reynolds. “That’s one of the reasons that it’s so important that you join together and that we ask you for solutions.”

PHS junior Sophie Eng told the audience that she thinks the first step to managing a relationship with social media is awareness. “I did see a lot of myself and my actions reflected in the people they interviewed,” Eng said.

PHS junior Haydn Wolfers noted how difficult it was for her to change her online habits. She also found it interesting to observe the reactions of the adults around her during the film. She said that they would laugh at things that were strange to them, but normal to her.

“I tried to kind of change all at once, but that didn’t work,” Wolfers said. “I need to figure out how to do that over time.”

MHS sophomore Blaise Harrison shared a story about a time when she was with her best friend. Every five minutes, her best friend would look at her phone. “I just put both of our phones in my pocket and we spent two hours talking to each other uninterrupted,” said Harrison. “I felt like it was a little bit of my responsibility to try and help my friends because helping my friends would be helping me have a better connection with them.”

School Board member Sarah Pearson asked the five students if they could talk about the idea of phone-free zones and campuses. Reynolds added that San Mateo High School began the school year with phone-free policies implementing the Yondr phone pouch. San Lorenzo High School has also joined in, albeit using a stricter policy where phones are banned during school hours.

“I don’t really think that would be a good idea for Piedmont High School at this point,” said PHS junior Ang Lee. “Students should be able to self regulate. I think it would be better to teach kids how to manage their cell phones and work with social media rather than taking it away altogether.”

At the end of the panel, Eng announced that after Reynold’s visit to her social psychology class last year, Eng and Wolfers decided to create a Mindhood Club, following in the footsteps of an initiative that Reynolds started at Dartmouth College. The Mindhood movement seeks to flip “the current tech-addicted culture with digital wellness peer trainings focused on current research on the impact of technology, ways to mindfully use our phones, and the importance of in-person relationships.”