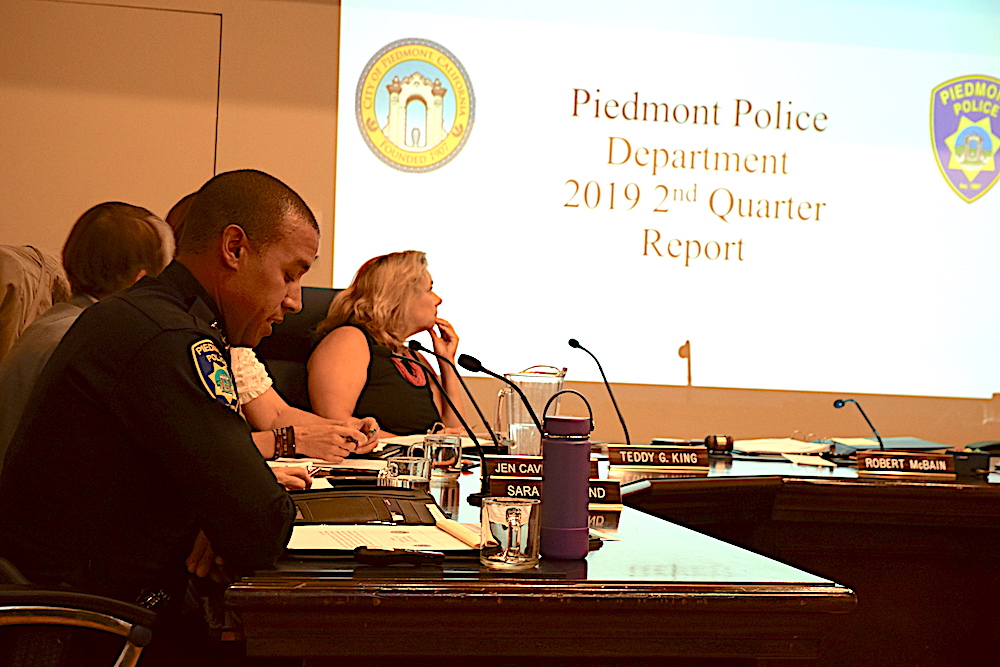 Police Chief Jeremy Bowers in a photo taken at a 2019 city council meeting.

This city had fewer reported major-category crimes over the first half of 2019 than over that same period the previous year, police Chief Jeremy Bowers told the City Council Tuesday night — with one notable exception, in a reflection of regional trends.

This information was part of Bowers’ periodic report to the Council on local crime statistics. Among the other high points of Bowers’s report were the ongoing utility of the city’s automated license plate-reading cameras (ALPRs), the police department’s growing social media outreach (NextDoor, Instagram and Facebook) and the addition of a new “juvenile officer” initially tasked with addressing issues connected to vaping and nicotine use.

Overall, “Part One” crimes in Piedmont (major crimes that include murder, forcible rape, robbery, aggravated assault, burglary, larceny theft, auto theft, and arson) as reported to and compiled by the FBI, were down slightly through the second quarter 2019 from the same first six months of 2018. There were 104 total incidents reported to Piedmont police the first six months of 2019, down from 114 incidents reported over the same six months in 2018, Bowers said.

Burglaries, defined generally as the unlawful entry into a building to commit a theft or other felony, went down from 30 cases for the first half of 2018 to 17 those same first six months of this year.

Bowers said, “A significant portion of these numbers … were construction-related thefts from cars” in and around construction work sites. The most frequent target, he said, is construction tools. Vehicle break-ins of all types have been a growing bane in communities all over the Bay Area, the chief added.

Thirty reported vehicle collisions were a decrease compared to the first two quarters of 2018 when 44 collisions were reported. Speed and inattention continue to be the main factors associated with the reported collisions, Bowers said.

Bowers and others said Tuesday that Piedmont’s automatic license plate-reading cameras (ALPRs) have recorded more “hits” on vehicles wanted in connection with a crime in Piedmont, Oakland, or elsewhere. The number of arrests directly related to ALPR hits was down in the first half of 2019 from the previous year, from 12 to 5, but Bowers told the City Council that the cameras not only help solve crimes in Piedmont and beyond, but help foster relationships between officers in Piedmont and other departments that provide long-term benefits.

Mayor Robert McBain also noted that the ALPRs helped in finding suspects in two Aug. 4 robberies of young people on Piedmont streets — arrests that happened too late to be counted in the second-quarter crime numbers. (Editor’s note: The recent string of catalytic converter thefts in July and August are not reflected in the half-year report.)

Bowers also acknowledged four-year Police Officer Nicole Casalnuovo, who was recently named the department’s new Juvenile Officer.  Her initial focus will be education and training about the destructive results of vaping and nicotine use. Casalnuovo’s position will be funded for two years by a  $391,599 California Department of Justice Tobacco Grant.

Related efforts to come under Casalnuovo’s purview include developing a diversion program for students who “run afoul of certain laws or school policies and rules,” a potential “restorative justice” program in which young offenders could offer some sort of restitution for their transgressions, and consideration of installing vaping sensors at Piedmont school campuses.

Council members were pleased with Bowers’s presentation. “It’s a great report,” McBain said. “The numbers speak for themselves.”

For a full report by the numbers, click here: http://www.ci.piedmont.ca.us/html/govern/staffreports/2019-09-03/crimereport2nd.pdf