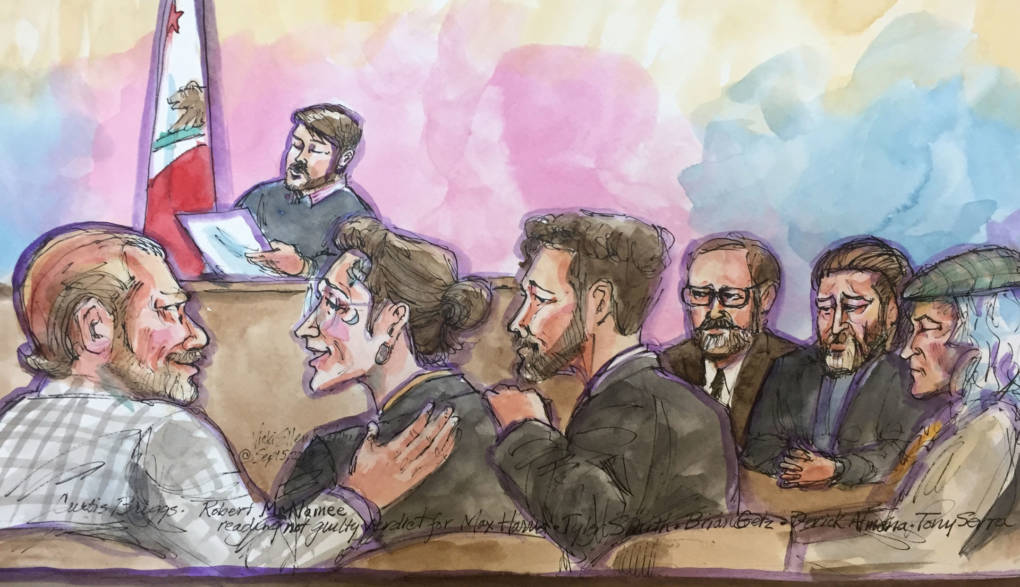 In a dramatic end to a lengthy trial, a jury on Thursday acquitted Ghost Ship creative director Max Harris and deadlocked on master tenant Derick Almena on involuntary manslaughter charges for a fire at the Oakland building in 2016 that killed 36 people.

Almena, 49, and Harris, 29, faced 36 counts of involuntary manslaughter for the fire at a music party at the 10,000-square-foot warehouse in the 1300 block of 31st Avenue in Oakland’s Fruitvale district, which served as an artists’ collective, that killed 36 people the night of Dec. 2, 2016. They faced up to 39 years in state prison if they’d been convicted.

The conclusion of the high-profile trial, which began with jury selection on April 16 and opening statements on April 30, came on the fifth day of deliberations by a reconstituted jury panel of seven women and five men. The case was submitted to jurors on July 31 but on Aug. 19, which was their tenth day of deliberations, Alameda County Superior Court Judge Trina Thompson dismissed three jurors for alleged misconduct, replaced them with three alternates and ordered the revised panel to start deliberating from scratch.

The reconstituted jury deliberated on Aug. 20 and 21 but then took a long break until it returned on Tuesday to resume its deliberations. Court officials announced at noon on Thursday that the jury had reached a verdict and it would be announced at 2 p.m. But after victims’ family members, friends of Harris and Almena and reporters packed Thompson’s courtroom in anticipation of a verdict, Thompson inspected the jury’s verdict forms and said they were “incomplete” for one of the defendants and sent the panel back to its deliberating room.

The jury returned to the quiet and tense courtroom at 2:25 p.m. and clerk Robert McNamee finally began reading the verdicts for Harris, who was the “A” defendant in the case. Harris’ lead attorney Curtis Briggs hugged Harris, who was dressed in a dark suit, yellow shirt and yellow tie, as soon as McNamee began reading the 36 not guilty verdicts for him. It took McNamee 15 minutes to read all of the verdicts. Thompson immediately ordered that Harris, who has been in custody since he and Almena were arrested on June 5, 2017, be “released forthwith,” although he was taken back to a courthouse holding cell and isn’t expected to be released until later on Thursday.

Thompson next asked the jury’s foreman if he thought further deliberations would help the panel reach a unanimous verdict for Almena but the foreman and the rest of the jury said that wouldn’t help them. The foreman seemed confused when Thompson asked him how many times the jury had voted on Almena’s fate but he ultimately said they it had voted “multiple times” and that in its latest ballot it had deadlocked with 10 jurors voting guilty and 2 voting not guilty.

Thompson then declared a mistrial, prompting the 35 victims’ family members who filled the prosecution’s side of the courtroom to groan loudly. Thompson ordered Almena to return to court on Oct. 4, when future court dates, including a potential new trial, will be scheduled. Alameda County Chief Assistant District Attorney Kevin Dunleavy said later in the day that his office will make a decision on retrying Almena after it reviews “the facts and evidence that came out in the case” as well as comments by jurors.

Fighting back tears and taking long pauses to compose himself, Brian Getz, one of Almena’s lawyers, said shortly after the mistrial was declared, “I’m not happy but I’m relieved that he (Almena) wasn’t convicted.” But Getz stressed, “It’s very important not to forget what happened,” referring to the 36 people who died in the fire. Almena remains in custody in lieu of $750,000 bail but Getz said Almena might file a motion in the near future asking that his bail be reduced so that he can be freed.

Danielle Silva, a friend of Harris and Almena who attended most of the trial, said she’s happy that Harris was acquitted. Silva said Harris lost seven friends in the blaze and she also lost friends.

Oakland Mayor Libby Schaaf said in a statement, “Our thoughts are with the families and friends of the victims today. I am grateful for the professionalism and integrity displayed by all current and former city employees who participated in this trial.”

Mary Alexander, the lead attorney in a civil suit filed by the victims’ family members against PG&E, the city of Oakland, the Ng family that owns the warehouse and others, said, “We’d like to thank the District Attorney’s Office for their diligent work in holding these defendants accountable for their crimes.” But Alexander said, “There is additional work to do to complete the circle of justice, and that includes the civil case. We look forward to going to trial in May to obtain the full measure of justice the victims and their families deserve.”