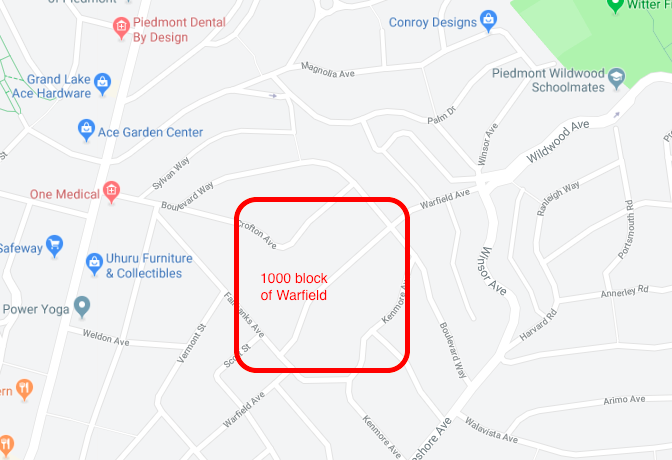 From the Piedmont Fire Department on Thursday, September 5:

Today at approximately 3:25 p.m., the Piedmont Fire Department responded to a reported structure fire in the 1000 block of Warfield Ave. Public Safety Dispatchers fielded multiple calls from residents who reported smoke coming from the garage. Piedmont Police Department units arrived first and secured the area for fire engine access then confirmed all the residents were out of the home.

Piedmont Fire arrived at approximately 3:30 pm and observed smoke and flames in the garage. Firefighters stretched fire hose into the building and extinguished the fire. Once the fire was knocked down, firefighters assisted with removing smoke from the rest of the house.

Three people were in the home at the time of the fire. They were alerted to the danger by a neighbor walking by. Residents used two fire extinguishers to hold the flames at bay until the Fire Department arrived. There were no reported injuries and the cause of the fire is still under investigation. Damage to the structure and vehicle in the garage may exceed $100,000.

Residents are encouraged to visit the Fire Department’s page on the City web site to learn more information about fire prevention and free fire extinguisher classes offered by the department.

One thought on “Garage fire on Warfield Ave. quickly extinguished by Fire Department”