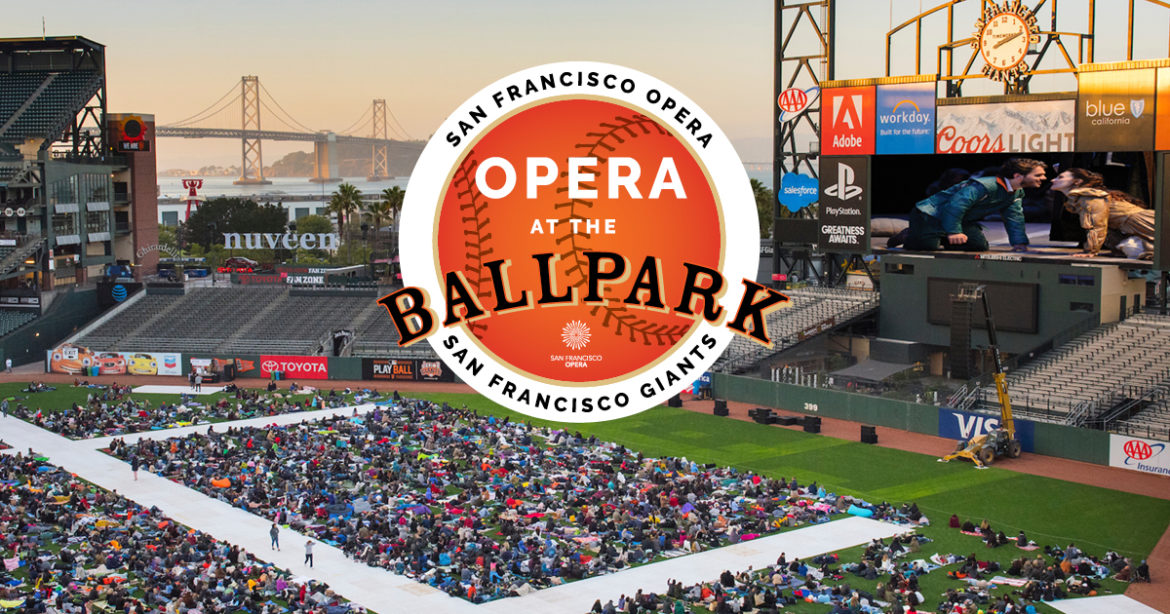 The opera "Romeo and Juliet" starts at 7:30 p.m. Saturday, but Oracle Park opens, first-come, first-seated, at 5:30 p.m. Preregistration is strongly encouraged at sfopera.com/simulcast.

The Bay Area is a hub of artistic expression, attracting artists, writers and musicians from around the globe to live, work and create. Local News Matters highlights some of the offerings here.

HOW big is that screen? Opera at the Ballpark, a free-for-all party San Francisco Opera has been throwing at the Giants venue for a dozen years now, is going to be bigger and better than ever this time around. That’s because Saturday night’s simulcast of the War Memorial Opera House production of Gounod’s “Romeo and Juliet” is going to blaze forth in high-def gargantuan proportions, on Oracle Park’s new 71-foot-high by 153-foot-wide Mitsubishi Electronic Diamond Vision Board. It’s the third largest scoreboard in the major leagues and the biggest movie screen in San Francisco. So those closeups of tenor Pene Pati as Romeo wooing the comely young Nadine Sierra’s Juliet are going to be really close up. The opera starts at 7:30 p.m., but the park opens, first-come, first-seated, at 5:30 p.m. Preregistration is strongly encouraged at sfopera.com/simulcast.

Smuin Cashes in: Smuin Ballet opens its 26th season with a triple header set to a country music giant’s tunes, a jazz icon’s most recognizable record and an all-out classical choral blowout. Choreographer James Kudelka’s “The Man in Black” is a dance tribute to the inimitable Johnny Cash, and Rex Wheeler’s “Take Five” is a jaunty piece set to Paul Desmond’s hit for the Dave Brubeck Quartet. Carl Orff’s thunderous cantata “Carmina Burana” inspired the late Michael Smuin to create the work that completes the program.  Showtimes: 7:30 p.m. Sept. 20 and 2 p.m. Sept. 21, Lesher Center for the Arts, Walnut Creek, with eight more performances Sept. 27-Oct. 6 at San Francisco’s Cowell Theater. Tickets, $25-$97 are available at 415-912-1899 and www.smuinballet.org.

Word for Word: The San Francisco theatrical troupe that performs dramatic presentations of literary classics as they were written tackles Samuel Taylor Coleridge’s epic poem “The Rime of the Ancient Mariner.” The stage at Z Space performance complex, where the show runs through Oct. 12, will be converted into a large sailing vessel as Word for Word actors re-create Coleridge’s tale of environmental destruction and the toll it exacts. Tickets are $20; www.zspace.org.

The divine Ms. J: The Golden State Warriors haven’t opened their season yet, but their new arena is up and running with a full slate of concerts. On Sept. 21, the Chase Center welcomes R&B icon Janet Jackson, who was finally inducted into the Rock and Roll Hall of Fame this year. She’s celebrating the 30th anniversary of “Rhythm Nation,” so expect to hear a lot of songs from that classic album. Show starts at 8 p.m., and tickets are $49.50-$499.50 at ticketmaster.com.

Authors in abundance: Literary lions descend on the Bay Area for readings, Q&A’s and book-signings this weekend: Salman Rushdie, Colson Whitehead and Tracy Chevalier are all making appearances to tout their new works. “Girl With a Pearl Earring” author Chevalier pops up first at 7 p.m. Sept. 18 at Rakestraw Books in Danville to talk about her new novel, “A Single Thread.” Tickets, at $30, include a signed copy of the book and are available at www.rakestraw.com. Rushdie engages in conversation with San Francisco author Andrew Sean Greer at 7 p.m. Sept. 20 at First Congregational Church of Oakland. The topic is his novel “Quichotte,” and tickets in various options ranging from $10 to $50 can be accessed at www.berkeleyarts.org. And Whitehead opens Dominican University’s new fall lecture series in San Rafael at 7 p.m. Sept. 20 to promote his novel “The Nickel Boys.” A book is included with the $45 ticket; call 415-927-0960 or visit bookpassage.com.